Columbia Mayor Steve Benjamin is leaving the door open for a return to politics, however. 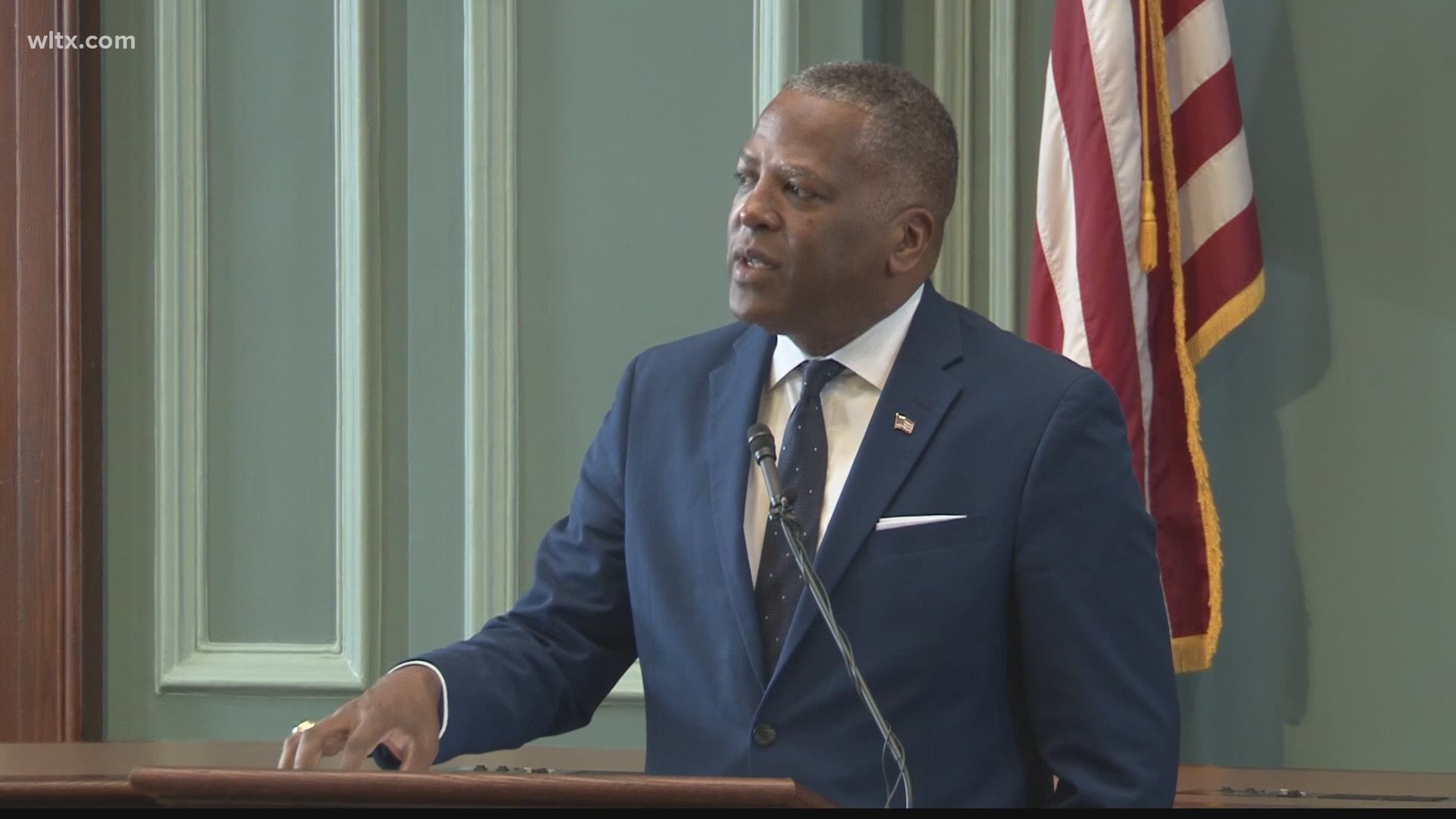 COLUMBIA, S.C. — The mayor of South Carolina’s capital city and one of the state’s highest-profile Democrats will not seek a fourth term in office.

Columbia Mayor Steve Benjamin said he wants to focus now on his law practice and family.

"Now is the time to step off the stage to continue to build my family," he said. "In my life I’m a child of God, a husband and father, and then I am Mayor. My faith and love for my wife and our children come first."

“In my life I’m a child of God, a husband and father and then I am Mayor my faith and love for my wife and our children come first so keep your priorities in order and keep doing that.”

His term ends on December 31. While he is leaving, he is keeping the door open for a possible return to politics. But said he said that's not on the agenda today.

"You never say never," he said.

For the next 10 months, he said he'll focus on making sure the city continues to deal well with the ongoing pandemic.

City Manager Teresa Wilson said she will miss working with Benjamin, but has high hopes for the city’s future.

"With every new leader they also will come with new ideas and perhaps new ways of doing things," Wilson said.

Councilman Sam Davis agreed. He also recently announced he will not be running for re-election.

"I think it’s good," Davis said. "There’s always a transition with personalities and leadership and I think we both made the decision that it’s time.”

Benjamin, 51, had opened speculation of his future two days ago when he tweeted about the press conference, saying that he wanted to "discuss the next season in my life and I hope that you'll join me."

He did say that he did not intend to run for governor.

Benjamin was elected in 2010 as Columbia’s first Black mayor. His national star within the Democratic Party has been on the rise with his service as president of both the the U.S. Conference of Mayors and African American Mayors Association.

He started his political career in 1999 heading up South Carolina’s Department of Probation, Parole and Pardon Services under Gov. Jim Hodges.

As a lawyer, Benjamin first drew national attention to himself in 2009 when he represented radio host Tom Joyner and secured a pardon for Joyner’s uncles who were wrongfully convicted and executed for the death of a 73-year-old Confederate War veteran in 1913. The SC Board of Paroles and Pardons voted unanimously to grant the posthumous pardon, the first for a capital case in South Carolina.

In 2010, he won the election to replace Bob Coble, who’d led the city for the previous 20 years. He was re-elected in 2013, then faced no opposition when his term came up for renewal again in 2017.

Benjamin’s nearly 11-year-long tenure has featured successes and setbacks, but what he may likely be best known for is pushing for the rebirth of downtown with efforts on Main Street and the BullStreet project.

Main Street had for decades been losing tenants, but over the past decades had seen several restaurants locate there, the opening of the Mast General Store, the building of a high rise at the corner of Main and Gervais, and the decision to move the Soda City Market to that area.

TheBullStreet project, an effort to reimagine an over 200 acre spot where the old state mental health hospital was, was seen as a cornerstone of efforts to transform the area near downtown. The place features Segra Park, a stadium’s that’s the home of the Columbia Fireflies minor league baseball team. After some struggles to attract other tenants over the years, it’s recently added REI, Starbucks,  the First Base Building. Their remains a plan to renovate the historic Babock Building, which was heavily damaged by fire last year, and turn into into apartments.

During Benjamin’s time in office, there was also the expansion of housing throughout the city for University of South Carolina students, including The Hub (the old SCANA headquarters), the conversion of the old Palmetto Compress into housing, and the Station at Five Points.

In 2013, Benjamin became the face of a campaign to change city governance to a strong-mayor model rather than a city manager and council. He thought a full-time mayor was what the city needed. But voters didn’t agree, as the referendum was voted down, 57 percent to 43 percent with 11,700 residents voting. The city remains with a mayor that gets an equal vote with the rest of council on all substantive issues.

Benjamin was faced with leading the city during the worst natural disaster in the city’s modern history, the 2015 flood. Parts of the city were impassable as almost two feet of rain fell in some areas, forcing people to flee for their lives from their homes. He and the city’s emergency response effort, including police, fire, and EMS, largely were praised for their efforts. But some of the scars of that time live on, as the dam at the Columbia Canal has yet to be permanently replaced.

in the wake of the mass shooting in Las Vegas, Nevada in 2017, Benjamin called for a ban on bump stocks, which were used by the shooter to make his gun into essentially an automatic weapon. Columbia was the first city to do so. But gun rights advocates said he acted unconstitutionally to change state gun laws, and he was sued by South Carolina Attorney General Alan Wilson. That suit is still pending.