She has not been seen or heard from since just after midnight on Oct. 31. 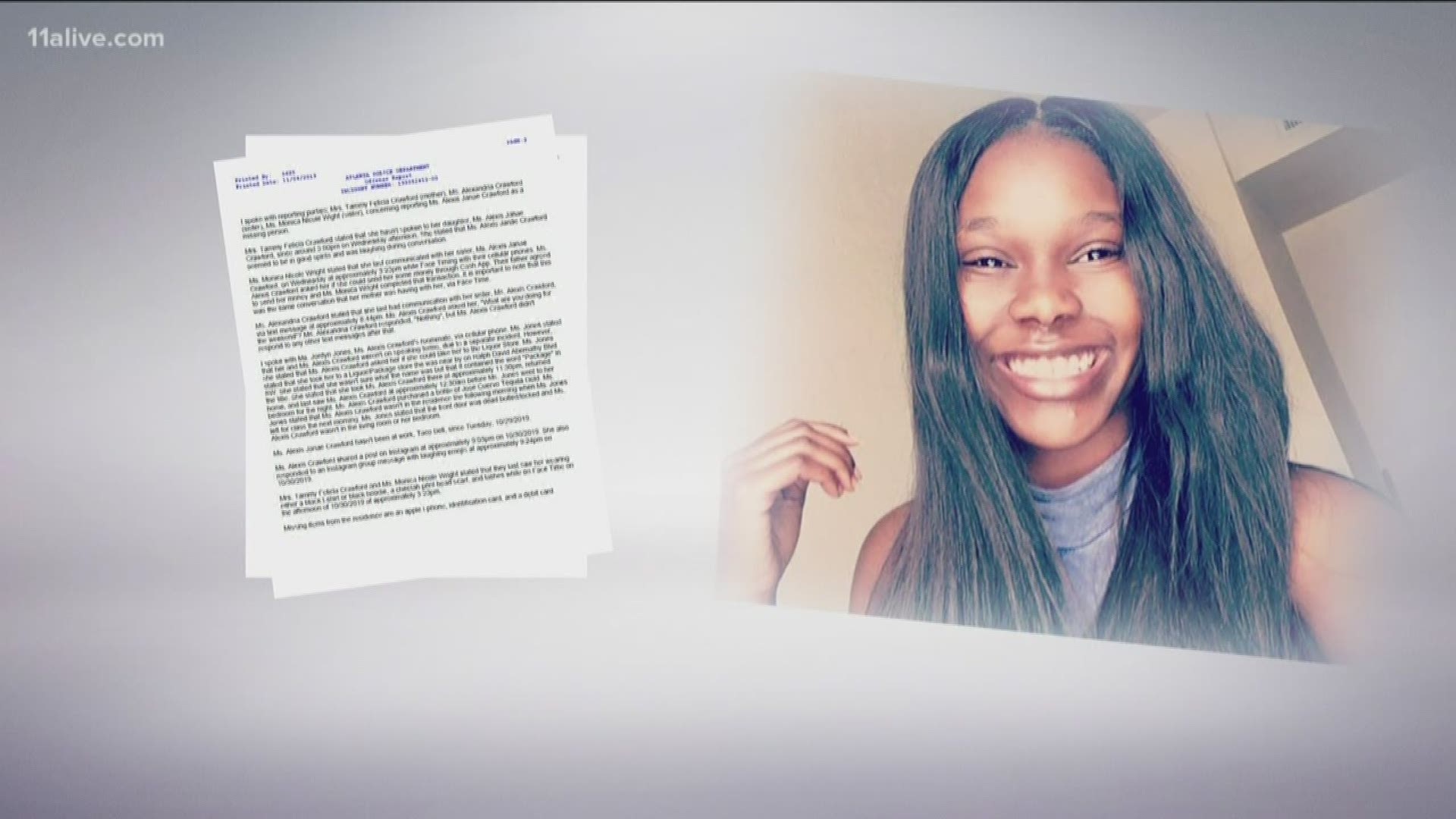 According to a police report filed by her family on Nov. 1 at around 10:45 p.m., Crawford's mother, Tammy Crawford, said she last spoke to her 21-year-old daughter on Oct. 30 and that she "seemed to be in good spirits and was laughing" during the conversation.

Her sister, Monica Wright said they all communicated with her that afternoon at around 3:23 p.m. during a FaceTime call.

Alexis asked her sister if she could send her some money through Cash App. The father agreed and Wright completed the transaction.

Another sister, Alexandria Crawford, said she texted Alexis at around 8:44 p.m. and asked what her plans were for the weekend. She responded "nothing" and didn't respond further.

On this same evening, Crawford shared a post on Instagram at around 9:03 p.m. She also responded to an Instagram group message with laughing emojis at around 9:24 p.m.

Alexis asked her roommate, who 11Alive is not naming, to take her to a liquor store on the night of the 30th.

She said she took her to the store at around 11:30 p.m. and returned home. She said she last saw Alexis at around 12:30 a.m. before the roommate went to her bedroom for the night.

The roommate told police that Alexis was not in the residence the following morning when she left for class. She said the front door was locked and Alexis wasn't in the living room or bedroom.

Alexis' bedroom was said to be in the same condition as it was on Oct. 26 when "a separate incident" occurred, police said. Police did not say what this incident was, however, Alexis told friends that she "wasn't comfortable sleeping in there" and had been sleeping in the living room since that date.

Crawford has not been at work since Oct. 29.

Police checked with Grady Hospital to see if Alexis was there or if they had any Jane Does, however, they did not.

Family says Crawford is 5’5", and weighs around 140 lbs. She has black hairs, dark brown eyes, and she had a mole that sits under her right eye.

If anyone has information, they are asked to call police.

She was insecure, so she laid in a hotel bed and got butt shots