Former Maryland state Sen. Gerald Winegrad says the species is under stress again and too little is being done to control the harvest of the iconic fish. 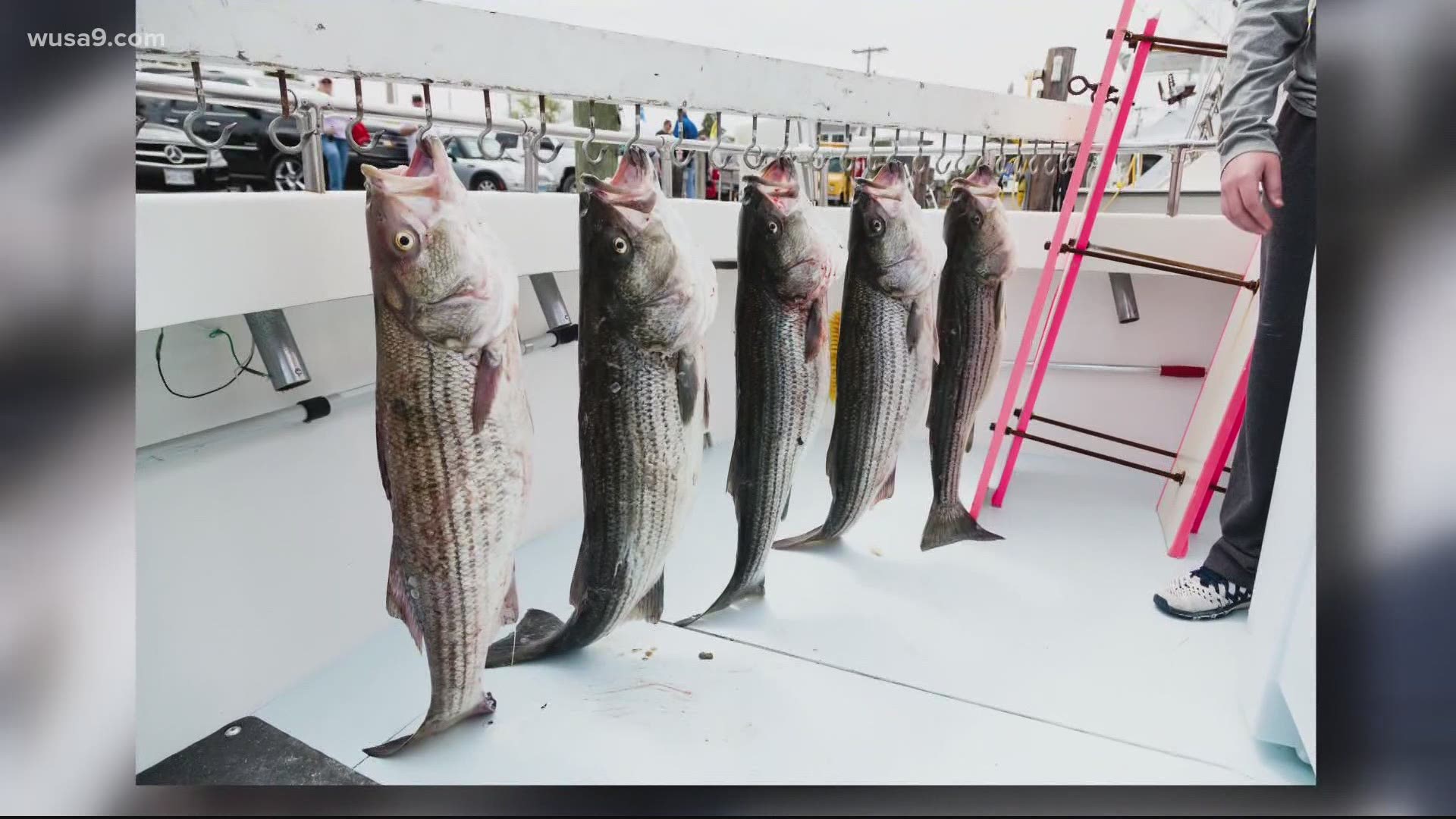 MARYLAND, USA — The architect of a historic fishing moratorium that saved the rockfish in the Chesapeake Bay nearly 36 years ago is warning that it could happen again.

Former Maryland State Senator Gerald Winegrad told WUSA9 Wednesday that efforts to stop an alarming slide in the population of rockfish are not working and action has to be taken now.

It is a drastic prediction, because the iconic Chesapeake Bay species amount to a half-billion-dollar industry in the Eastern U.S., according to one study for a recreational fishing organization.

"It's a potential if we wait two, three, or four years to really start cracking down on the harvest," Winegrad said. "It is a potential that we would be forced into such a drastic measure."

"Back in the 1980's we were experiencing similar declines," he added.

The famous five-year rockfish moratorium engineered by Winegrad and supporters in 1985 is credited with saving the species from complete collapse.

Populations of the fish came roaring back in the years after the moratorium was lifted in 1990. Winegrad cites numbers from the Atlantic States Marine Fisheries Commission, the interstate organization responsible for setting fishing limits on rockfish.

RELATED: US blocks seafood from Chinese fleet over crew mistreatment

"The species has been overfished since 2013 and overfishing is still occurring,” Winegrad wrote in a recent column for the Annapolis Capital.

“Fishing mortality was found to be an alarming 55% above the target level to protect the species," he added.

Winegrad is particularly critical of Maryland's Department of Natural Resources, which he says has put most of the burden on reducing harvest on recreational anglers rather than commercial fishermen.

Hot weather is part of the equation.

Rockfish that are caught and released by recreational anglers die in alarming numbers during the hottest weeks of the summer because they are stressed by warm water which makes low oxygen levels and pollution conditions worse.

As many as 9% of these released fish die and go to complete waste, according to mortality studies.

RELATED: Crab prices at an all-time high across DMV

The Potomac River is closed from July 7 to August 20. The limit for recreational anglers has been slashed to just one keeper of at least 19.

Maryland has also shortened its spring season for trophy rockfish and has prohibited recreational fishermen from using traditional hooks in favor of so-called "circle hooks", which are less likely to kill a fish that swallows a bait deeply.

Maryland authorities should also consider ending the practice of "chumming" waters during the summer and fishing with live and natural baits in favor of fishing with single-hook, barbless artificial lures only, which are less likely to kill fish that are caught and released, said Allison Colden, Maryland Fisheries Scientist for the Chesapeake Bay Foundation.

Colden added that anglers should target other species such as invasive Blue Catfish and Northern Snakeheads during the hot weather closures.

How can we address all the invasive fish species that are in the #ChesapeakeBay? It's simple. Cook them!#BayAwarenessWeek #FindYourChesapeakehttps://t.co/ZmWXU47Jyr

Winegrad said the limits and hot weather closure are too little and too late.

"The only thing that we can do since we can't change the weather is to just to clamp down on that take to protect the species or else we will be facing a moratorium," he said.

Maryland along with other Atlantic coastal states needs to cut the harvest by at least 18 percent, according to the Atlantic Marine States Fisheries Commission which is the process of reassessing its quotas.