Post Office Building Still Closed Over a Year After Fire

A year and nearly two months has gone by and the Bishopville Post Office building remains closed. 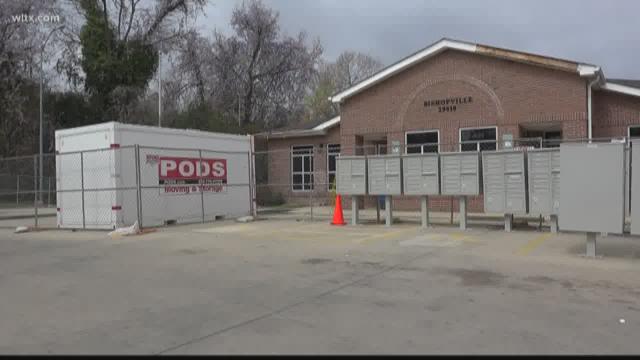 Bishopville, SC (WLTX) - Residents in one Midlands community are wondering when they’ll have a post office building to go to after it has been closed for over a year.

A year and nearly two months has gone by and the Bishopville Post Office building remains closed.

In January of 2017, a fire broke out inside the building and forced the United States Postal Service (USPS) to close the office until renovations could be done. The building remained closed for a longer period of time because of an investigation into the intentionally set fire.

Elijah Dinkins gets his mail from the mobile boxes set up outside the building.

"We're paying our box fee but were still on the outside and not in the inside. I hope in the future and very soon that they will get it together and have everything back to working," explained Dinkins.

"Sometimes it hasn't gotten to the post office in time for the carriers to put in our boxes. I will be very glad when they can get Bishopville Post Office up and running," said Williams.

Since that fire, the Postal Service has placed a mobile truck and post office boxes outside the building.

People who spoke with News 19 say they understand the situation is complicated and that the workers and customers have found a way to make things work.

Although Sylvia Scott is glad she can still get her mail, she hopes something changes soon.

"This is a little more convenient but still parking and having to get your mail from out of here, it's not the most convenient. It's not most convenient for getting your mail, especially when the weather is bad," said Scott.

John Ford decided to get rid of his post office box.

"It should have been opened about a year ago. I don't want to get my mail outside. See all this on the outside? It's no good. You might get robbed. This world is bad now," explained Scott.

He says he’s waiting for the postal service to deliver a building he can walk into and then he’ll get a box again.

USPS has been keepin gus posted on their plans and they say after the renovations are completed, the building will reopen in October.

Here’s the full statement we received from USPS:

“USPS expects to reoccupy the renovated building sometime in October 2018. During the renovation process, customers will continue to be served through an onsite temporary retail unit and collection box units.”