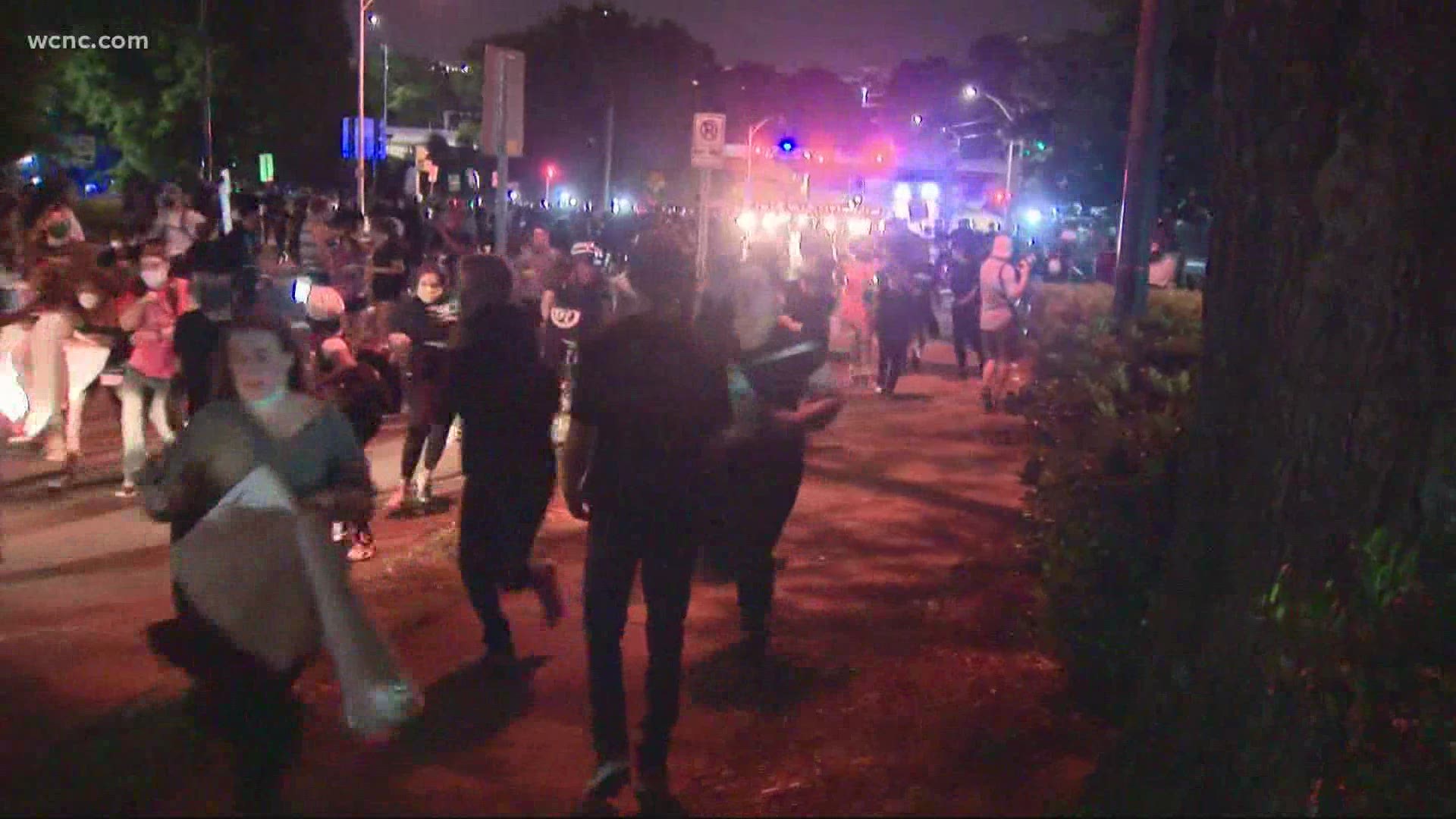 CHARLOTTE, N.C. — Four protesters are suing the City of Charlotte and former Police Chief Kerr Putney for what they call a violation of their civil rights.

In filed court papers, siblings Pierre Davis and Roshawnda Thorn, along with two others, accused the Charlotte-Mecklenburg Police Department of trapping them and using unlawful "violent, warfare-like and terroristic tactics" on the night of June 2.

"I want justice," Davis told WCNC Charlotte. "I need for those people and the City of Charlotte to be held accountable for their actions...so this won't happen again."

Video from the night in question, captured by Queen City Nerve, shows protesters trapped by CMPD in Uptown. Davis, Thorn and their fellow plaintiffs accuse CMPD of failing to give dispersal orders "prior to utilizing the excessive warfare-like explosive tactics, rubber pellets and tear gas on the peaceful protesters," according to the lawsuit.

RELATED: 'Wave goodbye. They're all about to be gassed.' | CMPD releases bodycam footage from protests

"It was an ambush," Thorn told WCNC Charlotte. "You didn't know if you was going to get shot from above, behind or in front."

The brother and sister, from Charlotte, said they were protesting excessive police force and the murder of George Floyd at the time of the "attack."

"We got police actually shooting at us in the crowd with no warning. Guys coming out of the parking decks shooting down at us. I felt hopeless. I felt like 'I'm going to die right here,'" Davis said. "As me and my sister was ducking for cover and (rubber) bullets are hailing and (they're) shooting pepper spray, I grabbed her by her arm real tight and said, 'We have to get out of here. We have to make it home.' That feeling alone, I'll never forget that. I took it home. I had to share it with my (13-year-old) son.'"

"My life just flashed before my eyes. I literally was like, "Am I still alive?" Thorn recalled. "It just made me feel like they just didn't care and I'm from this city. We should be able to peacefully protest."

Chief Putney previously apologized for the events of that night, but in his and the city's response to the lawsuit, denied most of the allegations. In their filed response, they said they acted "reasonably." They also disputed protesters who said there wasn't any violence or any dispersal order leading up to CMPD's actions.

"We can be better than that," Mayor Vi Lyles said the next day.

"Hey, wave goodbye," a CMPD officer said as protesters marched past. "They're all about to get gassed."

"It makes me just not even want to protest," he said. "I had to go home and tell my son, 'I almost lost my life' and didn't get to make it home to my son and wife, because I went to protest."

Their attorney said no person should ever feel that way.

"We cannot allow officers who are sworn in to serve us and protect us to in essence attack us when we are engaging in peaceful protests," attorney Alesha Brown said. "We want people to feel comfortable with getting out in the streets and exercising their First Amendment rights. We are going to make sure the city is held accountable. We are going to make sure that CMPD is held accountable."

Their lawsuit not only accuses the city of violating their civil rights, but it also says they were victims of negligence and false imprisonment. The lawsuit seeks an undetermined amount of money and an order to prevent the use of similar tactics on peaceful protesters in the future.

The City of Charlotte declined to comment for this story.

"Thanks for the opportunity, but we're going to respectfully pass," a spokesperson said.

In response to a WCNC Charlotte public records request, the city initially refused to release public records detailing specifics of Davis and Thorn's claim, saying "It is the City’s policy to not respond on ongoing, active lawsuits." As a result, we asked the city to cite the specific law preventing the release of those public records. The city never provided that specific law.

In the meantime, WCNC Charlotte visited the courthouse, found the actual lawsuit, contacted the plaintiffs' attorney and requested an interview. Less than 24 hours after WCNC Charlotte alerted the City of Charlotte that our story would air Thursday at 6, the city provided the previously withheld public records.