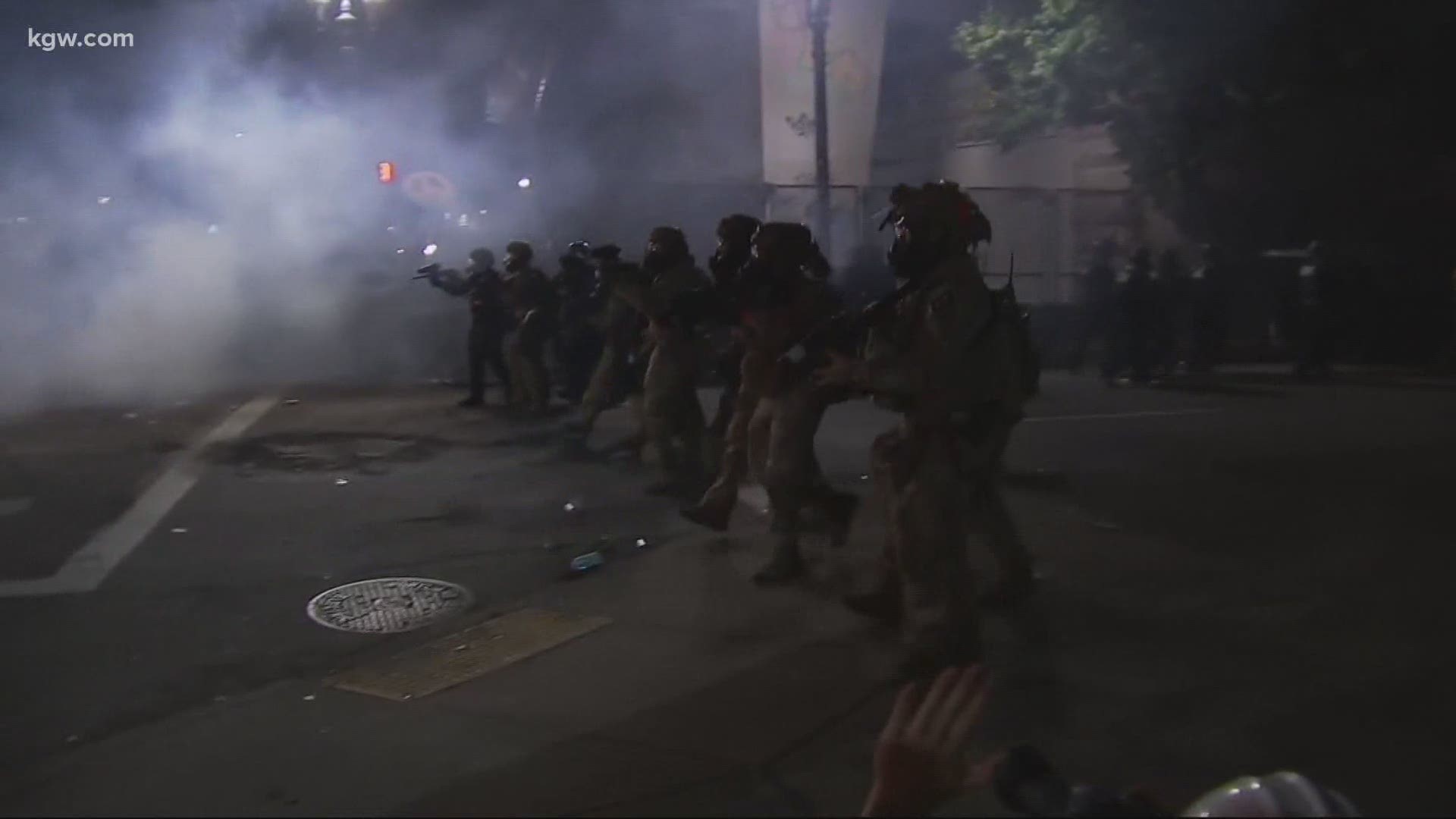 “After discussions with the Vice President and administration officials this week, the federal government has agreed to my demand and will withdraw these officers from Portland,” Gov. Brown said. “They will also clean up the Courthouse, removing the graffiti."

Acting Department of Homeland Security Secretary Chad Wolf offered a different view of the agreement, however, saying federal officers will remain in Portland "until the violent activity toward our federal facilities ends."

"The Department will continue to maintain our current, augmented federal law enforcement personnel in Portland until we are assured that the Hatfield Federal Courthouse and other federal properties will no longer be attacked and that the seat of justice in Portland will remain secure," said Wolf. "This has been our mission since the violent, criminal activity began."

Portland Mayor Ted Wheeler said in a statement Wednesday that he appreciated Gov. Brown's leadership and her willingness to bring state resources to Portland.

"The Oregon State Police, Multnomah County Sheriff’s Office, and Portland Police Bureau will continue working together to keep Portlanders safe, and the Governor and I have given clear direction: we expect that they will continue engaging only if there is violent criminal activity," said Wheeler.

Federal officers tasked with protecting the downtown Portland courthouse have been involved in nightly clashes with demonstrators since early July. Officers, dressed in combat gear and camouflage, stood guard behind a fence and fired tear gas and other crowd-control munitions after some demonstrators started fires at the building, launched fireworks and threw bottles and other items.

Gov. Brown and Mayor Wheeler publicly denounced the increased presence of federal officers in the city and called it a political tactic by President Donald Trump and his administration.

"These federal officers have acted as an occupying force, refused accountability, and brought violence and strife to our community," Brown said.

Trump weighed in on Portland in two tweets Wednesday morning, claiming the city would no longer exist without the presence of federal officers.

...do not stop the Crime and Violence from the Anarchists and Agitators immediately, the Federal Government will go in and do the job that local law enforcement was supposed to do!

On Tuesday afternoon, hours after Attorney General William Barr defended the deployment of federal officers to Portland and other cities across the U.S., the Associated Press reported officials within the Trump administration were in talks with Oregon's governor about a possible withdrawal.

For weeks, protests in Portland, which began following the death of George Floyd in Minneapolis, had played out in different locations throughout the city.

In the evenings, peaceful crowds of thousands marched across bridges and gathered at Pioneer Courthouse Square and other locations. Later at night, smaller crowds would break off and often clash with Portland police officers closer to the Multnomah County Justice Center.

Some in those crowds also took aim at the federal courthouse, prompting the Trump administration to increase the presence of federal officers downtown in early July.

RELATED: 'We want to keep the focus on ending racial injustice': Protesters gather in downtown Portland amid discussions to pull feds from city

“After my repeated requests, the federal government has agreed to a phased withdrawal of federal officers that have been deployed to the Mark Hatfield United States Courthouse over recent weeks.

“These federal officers have acted as an occupying force, refused accountability, and brought violence and strife to our community. Beginning Thursday, all Customs and Border Protection and ICE officers will leave downtown Portland, and shortly thereafter will begin going home.

"After discussions with the Vice President and administration officials this week, the federal government has agreed to my demand and will withdraw these officers from Portland. They will also clean up the Courthouse, removing the graffiti.

“The local Oregon officers of the Oregon State Police will provide protection for free speech and the security of the exterior of the courthouse with the Federal Protective Service. A limited contingent of federal officials, who act as building security year-round, will remain and will stay focused on the interior of the U.S. Courthouse.

“I have grown increasingly concerned at the nightly confrontation between local community members and federal officers. We need to recognize that the protests in Portland are not solely about the federal presence. They started before federal agents descended on our city and they will likely continue after they leave.

“While I recently signed six police accountability bills, championed by the Legislature’s People of Color Caucus, and convened a Task Force to review and reform Oregon training and certification procedures for all local police officers, there is so much more to be done. The community is demanding more sweeping action. I agree.

“I will work with community leaders and elected officials to take bolder action to reform our police practices – including those of the Portland Police Bureau. We need to get this right.

“We have an opportunity that we cannot afford to waste. The departure of federal forces represents the beginning of a process that will be as difficult as it is overdue.

“If slavery is America’s original sin, then anti-Blackness is Oregon’s. Even before it was recognized as a state, Oregon prevented African Americans from settling here and owning property. For far too long, Oregon’s constitution ingrained discrimination into state law.

“Black, white, brown, and indigenous Oregonians are ready to address systemic racism. Let’s get to work.”

The federal occupation of our community has brought a new kind of fear to our streets. Federal agents nearly killed a demonstrator, and their presence has led to increased violence and vandalism in our downtown core. The daily coverage of their actions has distracted our community from the Black voices at the center of this movement, and the urgent work of reform.

I appreciate Governor Brown’s leadership in this discussion and her willingness to step in with State resources. The Governor and I agree: Oregon resources, expertise, and values are sufficient to manage Oregon issues.

The Oregon State Police, Multnomah County Sheriff’s Office, and Portland Police Bureau will continue working together to keep Portlanders safe, and the Governor and I have given clear direction: we expect that they will continue engaging only if there is violent criminal activity.

For nearly two months, many thousands of Portlanders have committed to conversation and action centered on police and criminal justice system reform in our community. Local and State leaders have taken meaningful steps. And we are poised to do more.

Today, Council will consider referring a ballot measure to fundamentally reimagine police accountability. The City Council has redirected millions of dollars from the Police Bureau’s budget, and is pressing forward with updates to bureau policies and training.

We are beginning to work with incoming District Attorney Mike Schmidt to reform the legal arm of the criminal justice system. We are advocating to State and Federal legislators for changes in the law.

And I am developing a community reinvestment proposal that I hope my colleagues will support when we discuss the City budget this fall.

The work of reform deserves our community’s full and complete attention, and I know that Portlanders will stay engaged. I’m proud of this community, and excited for the work ahead.