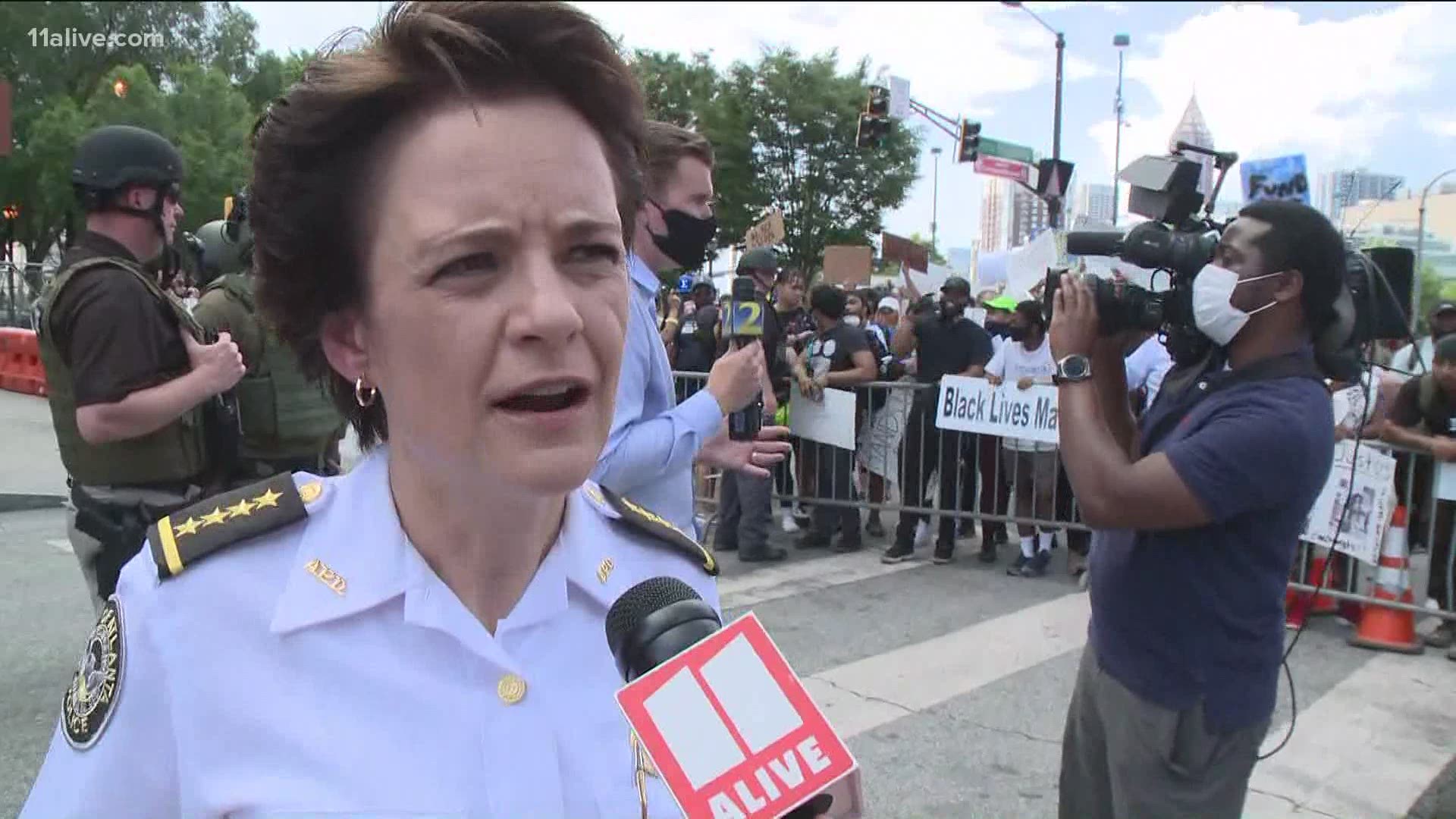 Protesters are demanding that Atlanta Police Chief Erika Shields resign in the wake of Friday night's deadly officer-involved shooting at a Wendy's on University Avenue.

According to the Georgia Bureau of Investigation, 27-year-old Rayshard Brooks was asleep in a car at a Wendy's drive-thru when two Atlanta officers attempted to arrest him.

Atlanta Police said that Brooks resisted arrest, forcing one of the officers to pull out a Taser. Brooks allegedly wrestled the Taser away from the officer, which led to the second officer getting involved.

According to witnesses, after the officers and Brooks wrestled on the ground for a short time, Brooks got up and began to run away from the officers. One of the officers fired another Taser at Brooks.

At that point, according to the GBI, one of the officers fired at Brooks, hitting him. Brooks was taken to Grady Memorial Hospital, where he died following emergency surgery.

According to Atlanta City Councilman Antonio Brown, Chief Shields told him that Brooks had been struck in the back and buttocks by the gunshots.

RELATED: Man killed after being shot by Atlanta Police during traffic stop identified

This is not the first incident the Atlanta Police Department has faced in recent weeks under the watch of Chief Shields.

On May 30, immediately after a curfew was enacted by the city of Atlanta, in downtown Atlanta, during a controversial arrest aired live on television, Atlanta Police officers were seen pulling a young man and woman out of a car.

When the young man and woman, college students Messiah Young and Taniya Pilgrim, were pulled from the car, Pilgrim told 11Alive's Hope Ford, who was at the scene, that she did not know why she was being arrested.

Another officer at the scene told 11Alive crews that officers had signaled the car to stop because another officer was in the road. The officer said that when the driver did not comply, police surrounded the car.

That same officer alleged the driver reached for something in or near his pocket. The passenger, the officer said, was told to get out of the car. He alleges that she didn't comply, and that's when they forced their way in. The driver was tased, and both were taken into custody.

However, after the video was shared online, Atlanta Mayor Keisha Lance Bottoms said she was immediately concerned and described it as "deeply disturbing on many levels."

Two of the officers involved in the incident were terminated following the incident, while four others were placed on desk duty. Two other officers were later fired.

The Fulton County District Attorney's Office has since brought charges against all six officers involved in the incident.

The two officers have asked for a court order reversing their dismissal from the police force.

Another Atlanta police officer was placed on desk duty following an incident the same evening in Buckhead.

A dental hygienist, Amber Jackson, had finished protesting at Lenox Square in Buckhead when she says she had moved a barricade in order to drive away from a parking lot.

Jackson said that at that point, an Atlanta police officer pulled her from her car and body-slammed her to the ground, breaking her shoulder.

Atlanta Police said that one of their officers had stopped a car where a woman was trying to remove a barricade, but refused orders to exit her vehicle.

"He attempted to get her out of the car and the two struggled," police said in a written statement. "During her effort, to resist the arrest, the officer had to force her to the ground to get her in handcuffs."

Video shared online from that night showed the woman, later identified as Jackson, being thrown to the ground.

Since that incident, the officer involved has been placed on administrative assignment and his actions are being investigated by the Department's Office of Professional Standards to determine if he violated any department procedures.

On Saturday morning, the Georgia NAACP started a Change.org petition demanding the resignation of Chief Shields, citing these cases as an indication of "inabilities of elected officials to ensure proper judgment necessary to arrest, indict, and convict officers who repeatedly murder innocent, unarmed Black bodies."

By 5 p.m. Saturday, more than 250 people had signed the petition.

Witness who recorded dental hygienist's arrest at Lenox Square: 'I don't know how she was able to get up'

Breonna Taylor's mom: 'I'm still waiting for her to come through that door'

1 / 27
WXIA
A man was shot and killed by Atlanta police during an officer-involved shooting on Friday, June 12 at a Wendy's on University Ave. in Atlanta.