SCANA had said they were in danger of going bankrupt. In voting for the merger, commissioners said it would be worse for the state if the company collapsed. 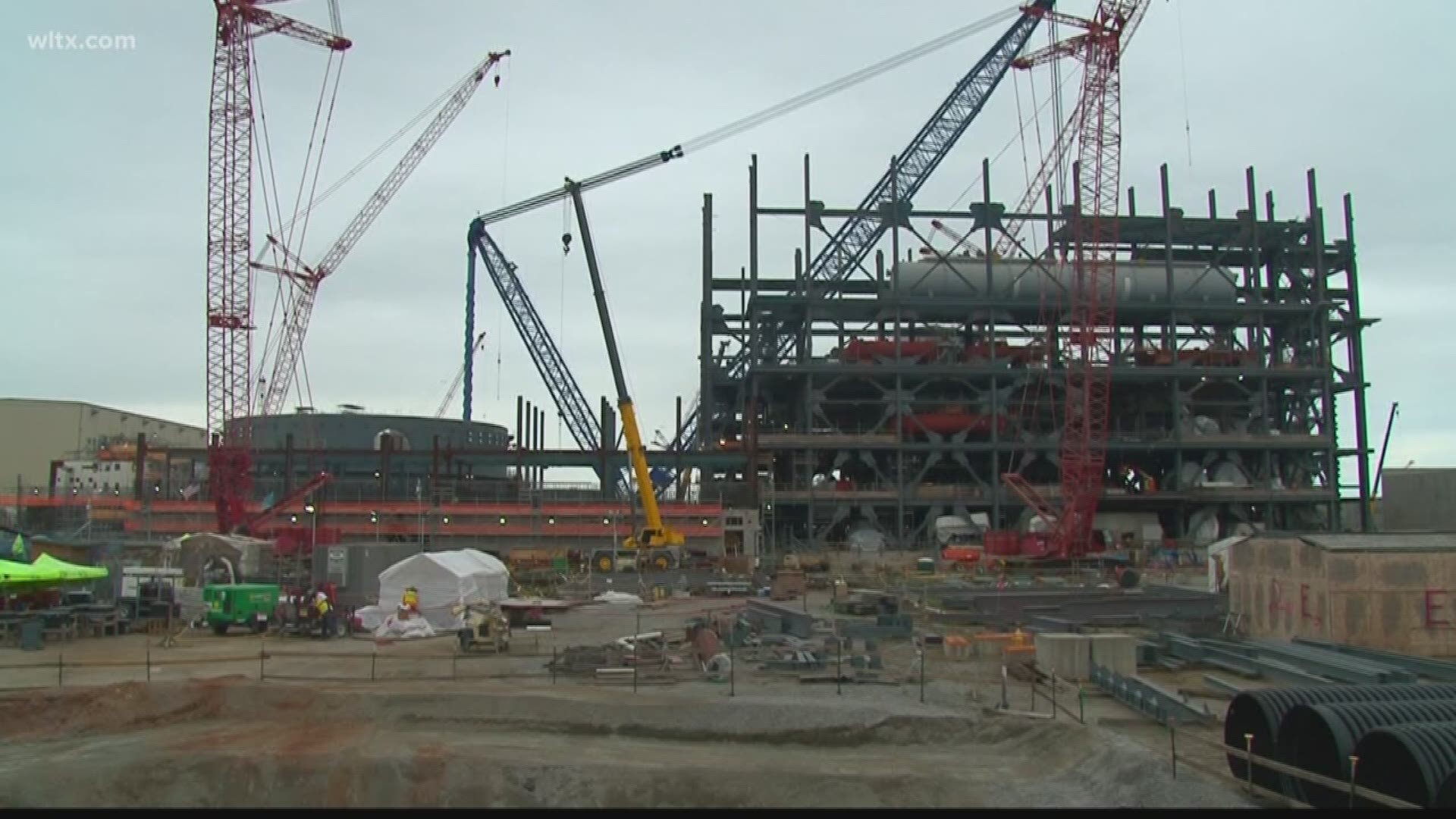 Columbia, SC (WLTX) - A South Carolina regulatory panel has approved the merger of the parent company of SCE&G and Dominion Energy, and locked in a rate reduction for customers as well for several years.

The South Carolina Public Service Commission made their decision Friday by a unanimous voice vote. It was one of the final pieces for the approval of a merger between the SCANA and Dominion, the Virginia-based utility giant. The union is a roughly $15 billion cash and stock bid.

And while regulators did approve a rate reduction for now, customers will still have to pay over $2 billion in costs over the next two decades, which will offset some of that rate reduction.

The deal could still be appealed.

It's the latest in the ongoing fallout from the failed construction of two new reactors at the V.C. Summer Nuclear Station in Fairfield County. Over $2 billion had been spent on the effort before SCE&G and Santee Cooper walked away in the summer of 2017.

Almost 6,000 people lost their jobs due to the abandonment of the effort.

SCANA had said they were in danger of going bankrupt if the merger didn't happen. In voting for the merger, commissioners said it would be worse for the state if the company collapsed.

"I believe it provides significant customer bill relief for SCE&G's customers without damaging SCE&G's credit worthiness or putting at risk SCE&G's financial soundness or ability to provide reliable service to the company's customers," said Elliott Elam, the Vice-Chair of the Public Service Commission.

"Since we learned of SCANA and Santee Cooper’s decision to abandon the VC Summer Project, my goal has been to ensure that the customers bear no burden for the failings of others," South Carolina Gov. Henry McMaster said in a statement. "The Public Service Commission – which I am confident has vigorously sought to make the best of a bad situation – has conducted a transparent, open process and has carefully deliberated the positions of ratepayers, the power companies, and the court.

"Our goal now must be to learn from these failures, to never repeat them, and to continue to work diligently for the growth and prosperity of South Carolina."

Here are the key components of the agreement reached between SCE&G, Dominion, and the Commission voted on Friday:

Friday's agreement also means there will now not be a $1,000 rebate to SCE&G customers that Dominion had proposed. That offer was mentioned repeatedly in TV and radio ads that aired in South Carolina as the company was trying to sell the public on supporting the merger.

The commission also rejected an amendment proposed by one commissioner that would have said SCE&G explicitly misled and lied to the public and Commission to get rate increases approved during the VC Summer project.

That led to an angry outburst from protesters who showed up for the hearing, many of whom are customers. At least one shouted "shame." At one point earlier in the hearing, the entire process had to be stopped when they began chanting, “Dominion buyout, more of the same, we want solar for a change.”

The PSC's decision came after a nearly month-long hearing into the rate fight. The Commission first started hearing testimony early in November.Throughout the hearing, critics of SCANA and SCE&G claimed the company knew for years the project was failing. 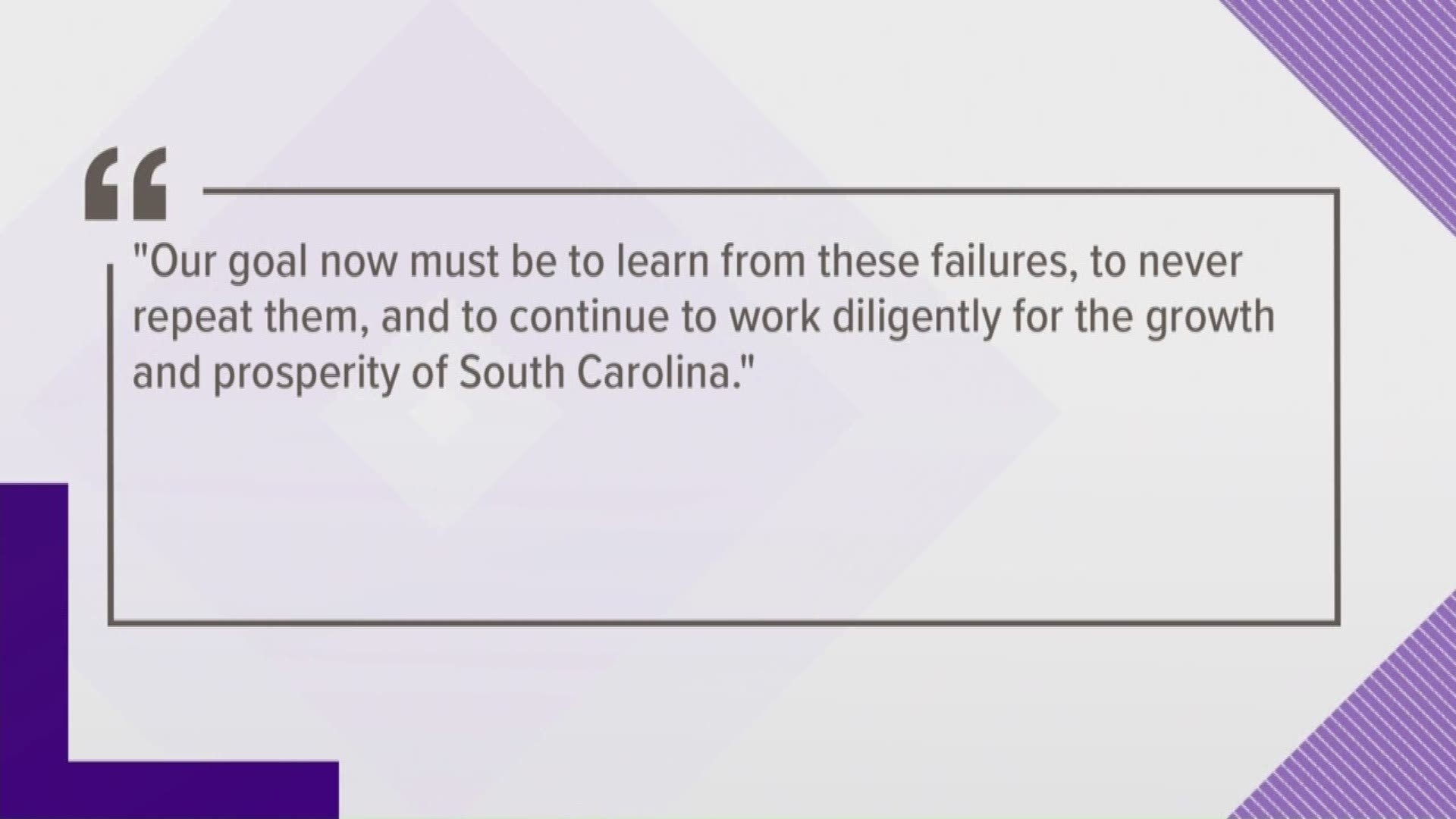 Attorneys representing SCANA and SCE&G said it was a multitude of factors that led to the project's failing, including the failure of project partners and oversight by the Office of Regulatory Staff.

Earlier this year, a temporary reduced rate was put into effect after a lengthy court fight. State legislators passed the temporary rate cut as part of a law along with refunds through the end of the calendar year. The reduced rate saved the average customer $22 on their monthly bill.

State lawmakers from both sides of the aisle, told WLTX before the hearing that they were waiting on the Commission’s decision before deciding if more legislative action is needed.

"Today’s decision by the PSC is a tremendous win for the ratepayers and validates the efforts of the House to maximize short and long-term relief for SCE&G customers. Through the efforts of the House in this matter, the ratepayers will see the return of the $2 billion already paid for this nuclear project and enjoy long-term rate relief that will save them billions more," Speaker Lucas said in his statement.

SCANA stock rose 6.3 percent in Friday trading, in part based on news of approval of the merger.

Dominion Energy released a statement later in the afternoon on Friday.

"Dominion Energy and SCANA are pleased with today's action of the Public Service Commission of South Carolina after an open, thorough and inclusive public process. We look forward to reviewing an order when it's issued," the statement read in part.

A spokesman for Dominion said the same portion of the statement at the end of the hearing.

"We are pleased that today's decision brings us one step closer to a final resolution and the certainty that stakeholders have been hoping for. We look forward to reviewing the details of the Commission's final written order when it is issued," said SCANA CEO Jimmy Addison as a part of the same joint statement.

After the hearing, the Dominion Energy spokesman, Ryan Frazier, said customers would still be paying for some of the failed project.

"Over about 20 years, the average ratepayer, average customer would pay a little under $700 over that 20 years for the N&D portion of their bills, for the abandoned reactors at VC Summer," Frazier told media after the hearing.

The continued payment and confusion over the new rate and other settlements outside the Commission proceedings frustrated ratepayers like Pamela Greenlaw.

"There are a lot of things in contracts we're unaware of, we don't know what's going to swept under the rug. We don't know what's really going to be included. One of the commissioners mentioned our service charge is 8 dollars, mine is 22. There's no $8 on my electric bill for my demand charge. It's $22. They use facts and figures, the public is not going to get a final understanding of this 'till we start getting our bills," Greenlaw said after the hearing.

A more detailed order about the settlement and new rate will be released before December 21st, according to the Commission.