According to doctors, the new program has helped patients receive the care they need, shorten hospital stays, and created better outcomes. 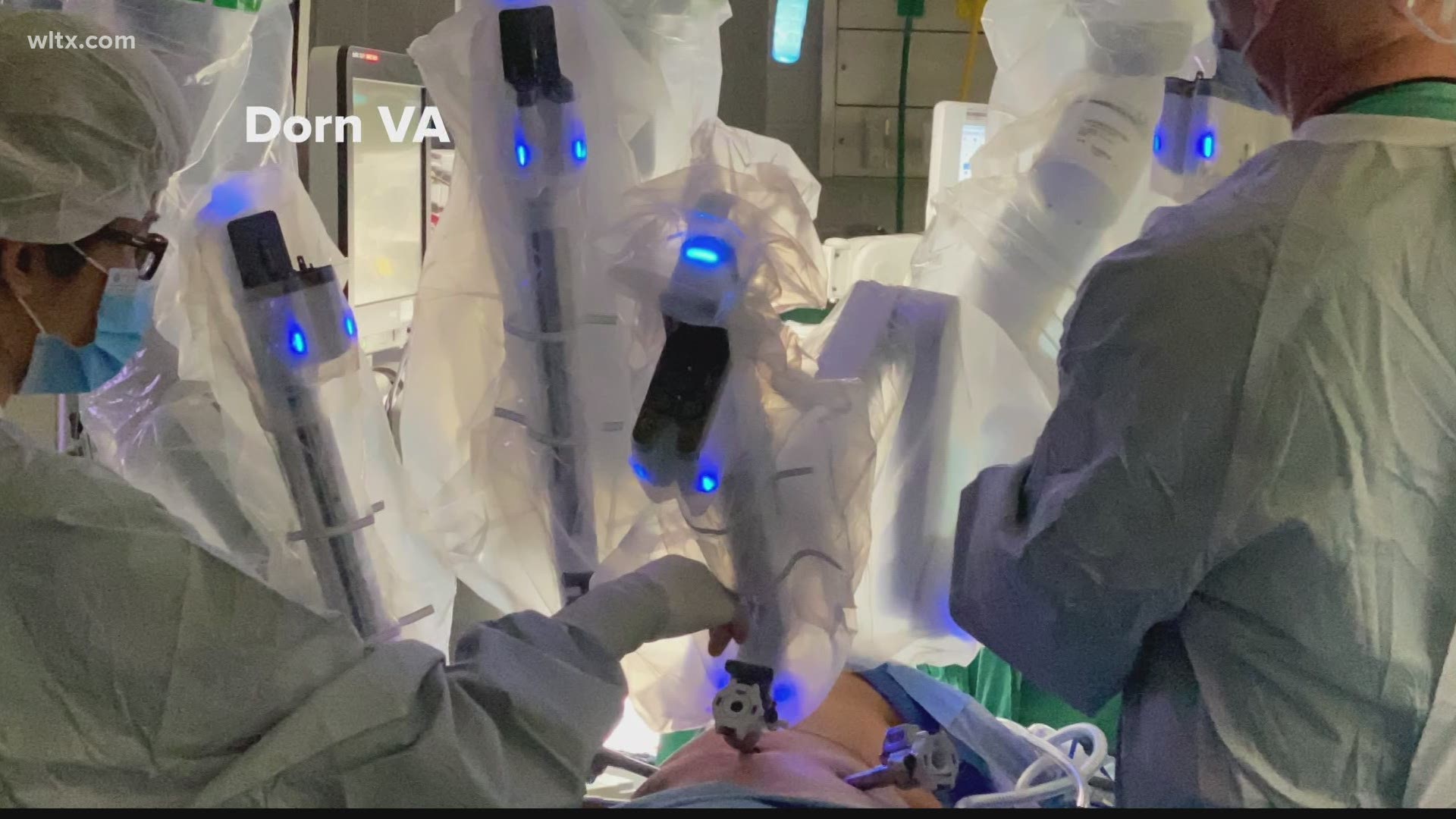 COLUMBIA, S.C. — The Dorn VA Hospital in Columbia has started a new program with robotic surgery that's making a big difference for patients.

Doctor Kurt Fichtner is a surgeon at the Dorn VA Hospital in Columbia. He says they started their robotic surgery program earlier on in the year.

"The robot was brought in November/December time frame last year. We underwent training and began doing some of our first cases in the January/February time frame," said Dr. Fichtner.

Even with the coronavirus pandemic, Dr. Fichtner says he's had 50 total cases himself and another five or six cases for the other surgeon who's a part of their program.

"We've been going strong now. Have done a mixture of general surgery cases and now thoracic cases," explained Dr. Fichtner. “I’m a thoracic surgeon by training. I came out of the military, a veteran. 21 years there. Took a job here with Dorn several years back. My goal has always been to bring robotic surgery to the thoracic patient group who will benefit the most.”

The doctor says robotic surgery is bringing a lot of value because of what it does for veterans. They have seen a positive impact in the quality of recovery.

Instead of having to wait weeks for someone to recover and leave the hospital after traditional surgery, many patients are leaving within a few days of robotic surgery.

The Dorn VA Hospital is using the most current model robot on the market.

When someone is brought in for surgery, the doctor performing the operation is controlling the robot on a console separate from the operating room table.

The doctor uses hand pieces to duplicate their own hand and finger motions. They have camera monitors that help doctors see what they're doing in the surgery.

"The robot is very team important. People focus on the robot but it's really about the human interface with the robot," explained Dr. Fichtner. "If it wasn't for the teams we have here and the company's support to teach the teams, the robot would not reach its maximum potential."

"All of it really results in a much, much lower stress, lower inflammatory provoking operation," said Dr. Fichtner. "That's one of the reasons these patients are able to do so well. They're body almost doesn't even realize that they had an operation."

Reginald Thomas, who recently had robotic surgery, believes it's the right method.

The VHA Innovation Ecosystem is collaborating with Fitbit to address health and wellness. Read more...https://t.co/GUfGYrHFMN

The doctor says the three best things that come out of the surgery are the outcomes, people returning to their normal activities sooner and not having the fear of having treatment in a timely fashion.

"By being able to bring somebody in with a spot that's unknown on their lung, do a procedure to tell us what that is and then, in the same setting, be able to treat them and potentially cure them on the same day and so cut down multiple visits to a hospital and delays that go on along with waiting for appointments," said Dr. Fichtner.

The doctor would like to see the program to develop into a referral center where other facilities who don't have the staffing or technology could send patients to them.

"For me, the best way to success using the robot is to do more robotic surgery and, if I can get more cases coming in, the team will become more proficient and enjoy it, I'll enjoy it and so that's the way to go."