The largest protests in decades are filling the streets of Cuba and reaching cities across the U.S including at the South Carolina State House. 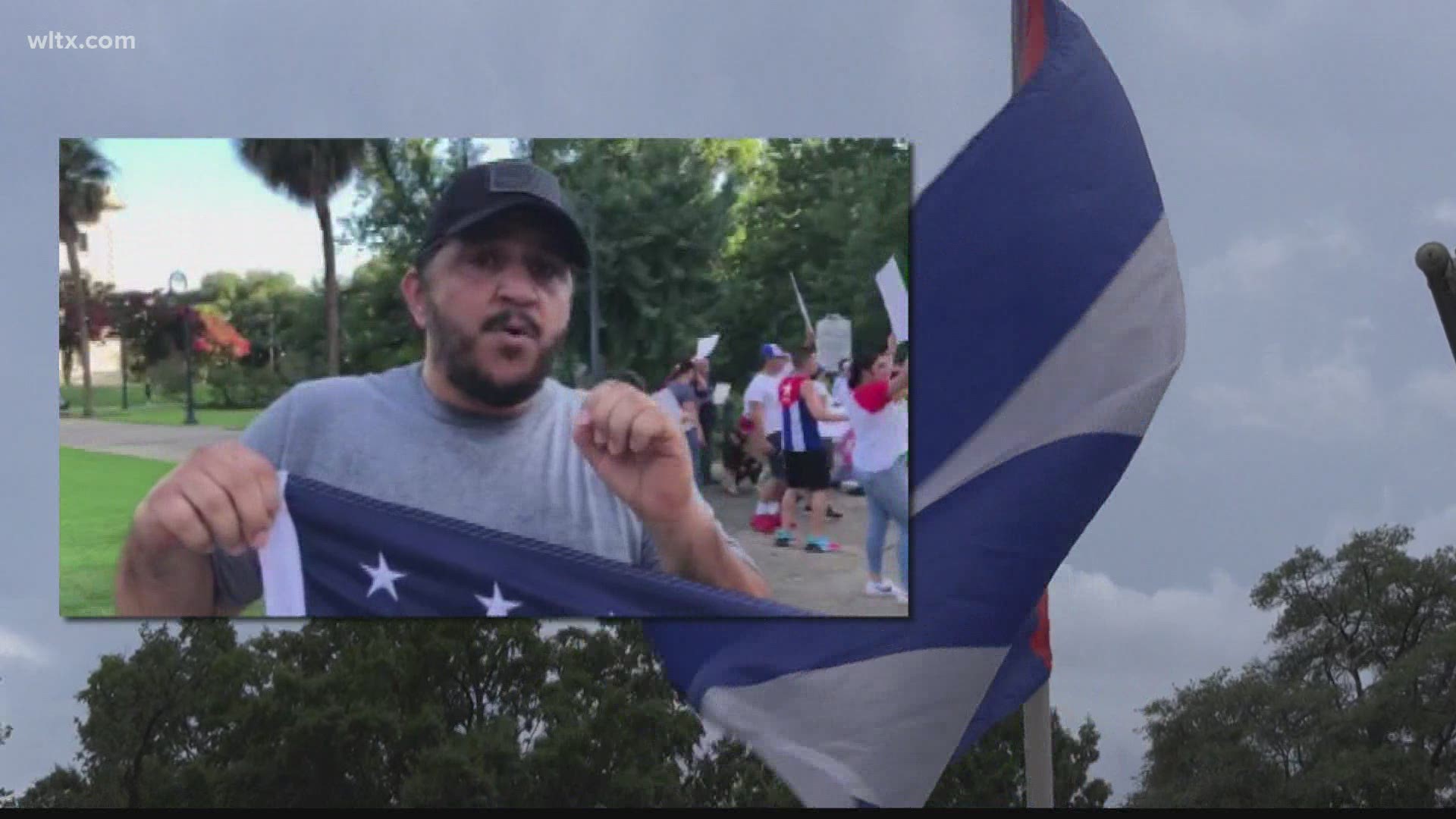 COLUMBIA, S.C. — Rallies continued Wednesday in the Capital City to show solidarity with the people of Cuba.

The local Cuban community says they're tired of watching protesters and family members on the island continue to be subjected to oppression and violence for decades.

But why rallies at the State House and why now?

RELATED: Amid anti-government protests in Cuba, false photos and videos are being shared on social media

"We want the world to know that Cuba is killing its people," said one protestor outside the South Carolina State House.

"We're hurting. People born there have left in rafts, have died being shot by leaving in rafts, have drowned. We can't do death anymore," said Rosanna Fonseca, a Columbia resident whose family is from Cuba.

The largest protests in decades are filling the streets of Cuba and reaching cities across the U.S.

For 62 years, the Communist Cuban government has kept a strong grip the island.

"We are calling for the attention of the American people and the American government," said a Columbia protestor from Cuba. "We need help."

Supporters for the Cuban people held signs outside the South Carolina State House that read '¡Abajo el comunismo!', which translates to 'Down with communism!'

Others proudly held signs that read SOS Cuba, as cars driving by honked their horns in support.

The group wants to send the message that the Cuban community in Columbia supports change for the island nation.

"Bad things are happening," said another at the rally. "Hunger, people are starving, they took the military away, the Internet, they took away."

"They're so hungry, they've eaten their fear," said Fonseca.

Dr. Jorge Camacho, a Cuban professor of Spanish and Latin American Literature and Comparative Studies at USC, knows firsthand what protests are like on the island.

"I was part of the first intellectual group who protested against the Cuban government in 1989," said Camacho. "Some of us suffered the police brutality. They came to our homes."

He attributes the worsening economic crisis in Cuba to increased sanctions and new laws put in place by the United States over the past five years.

Camacho says Cuba created their own vaccine and distributed shots first to people in power.

Death rates rose and so did anger and one of the many things that are leading to protests in Cuba.

"All scenarios I see are very difficult, especially for the Cubans. Cubans have no [guns]. The Cuban government confiscated all [guns] in the 1960's."

In the past, in attempts to diffuse protests, the Cuban government opened borders to allow residents to come to the United States. This time, however, Homeland Security Chief Alejandro Mayorkas said the U.S. will not give refuge to those fleeing Cuba.

"Taking kids away from their families and asking them to fight for the government with tools, with sticks and rocks not dressed as the military," he explained, saying Cuba's president, Miguel Díaz-Canel, encouraged those supporting the government to beat up protestors.

Camacho predicts the least bloody scenario will be change from the top down in Cuba with leaders recognizing changes are long overdue, or possibly troops deciding to side with the people.

"It seems to be a turning point that no one will be able to stop," he added. "This is the beginning of the end."

Tuesday, President Joe Biden said the U.S. stands firmly with the people of Cuba and he's calling on the government of Cuba to refrain from violence in their attempt to silence the voices of the people.