As of Friday afternoon at 3:30, there were still 15,859 power outages across South Carolina. Previously on Friday morning, there were more than 51,000 outages. 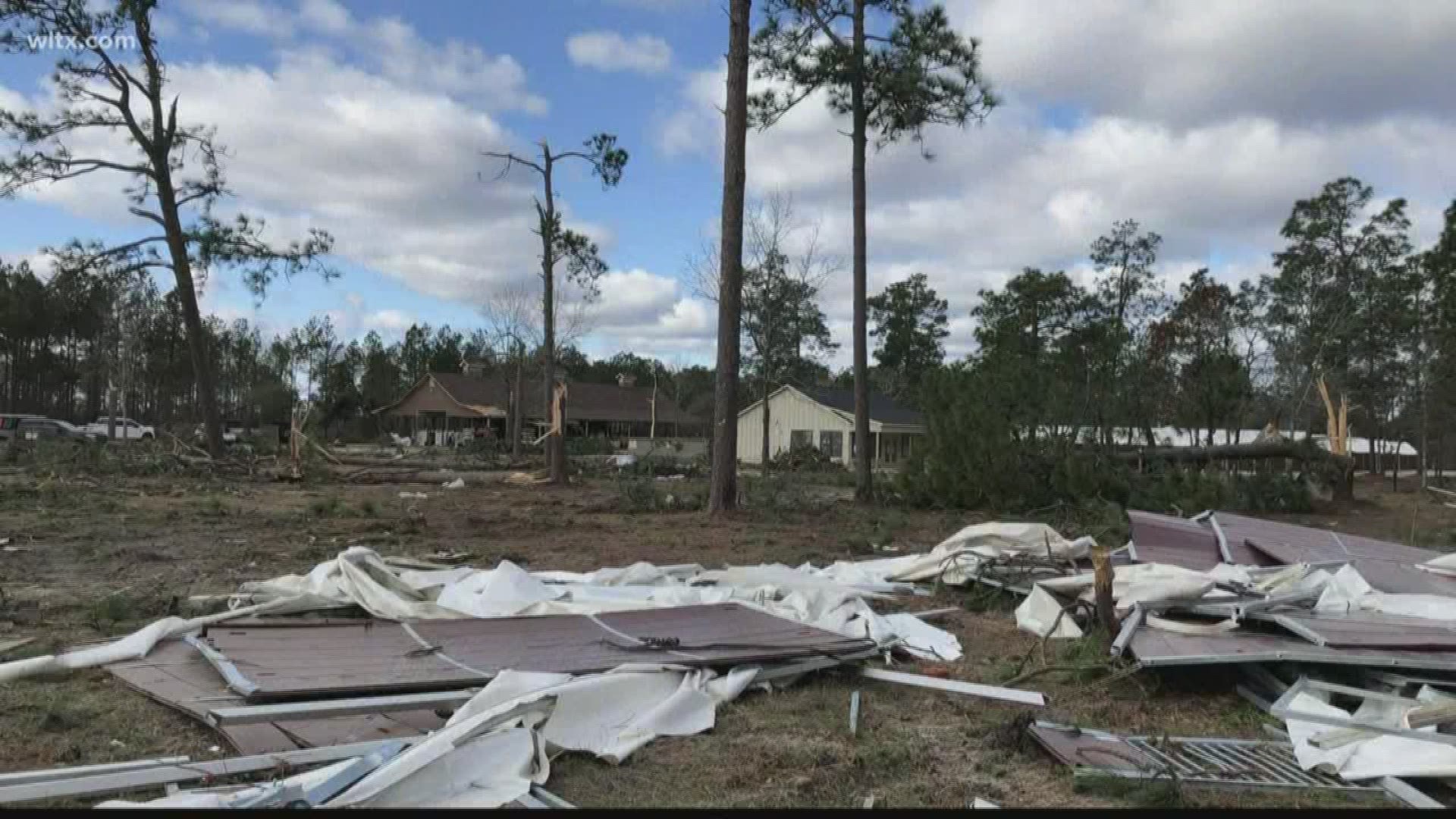 COLUMBIA, S.C. — The State of South Carolina continues to clean up after Thursday's powerful storm brought damage to multiple parts of the Palmetto State.

A cold front triggered severe storms for about five to six hours Thursday afternoon and evening. However, as the storms moved out, the incoming cold front also brought gusty winds up to 30 to 40 miles an hour.

Those high winds caused weak trees to snap or uproot, causing them to fall on homes and powerlines.

State officials confirm two EF-1 tornadoes affected two counties, one being in Aiken and the other being in Spartanburg.

The tornado in Aiken had peak winds of 105 mph and traveled 1.15 miles.

For some comparison, the storm that destroyed part of North Central Middle School was a strong EF-2, with winds at about 130 miles an hour.

The South Carolina Emergency Management Division (SCEMD) were able to give multiple statistics on how the storm impacted the state.

SCEMD said in a press release, "Residents in areas affected by Thursday’s storms should continue to use caution when traveling and cleaning up debris. Many roads, particularly in the Upstate, are still flooded in localized areas or are otherwise impassable."

As of Friday afternoon at 3:30, there were still 15,859 power outages across South Carolina. Previously on Friday morning, there were more than 51,000 outages.

SCEMD says 11 people were rescued by local firefighters and state water rescue teams on Thursday. Nine of those were in Greenville and the other two were in Anderson.

According to the release, SCODT confirmed one bridge in Anderson County off Hwy 81 was destroyed. Eight roads in the Upstate will need major repairs. There's also 83 roads closed from flooding as of Friday afternoon.

There was one storm fatality confirmed by the South Carolina Department of Public Safety. The incident occurred in York County.

One thing that's inevitable after a storm like Thursday's is storm damage. Many trees came down after the strong winds and heavy rain came through the Midlands.

Danny Allen, a supervisor with Expert Tree Care, says they're working long hours to help clean up the damage.

"We've been seeing a lot of trees uprooting, falling on houses, tops breaking out," said Allen. "We've been up since three this morning."

The company says the damage they've seen from Thursday's storm was not quite as bad as what they have dealt with the last few years.

So far they've been to Lexington, Irmo, and West Columbia.

"Oh man, it's been nonstop. We've done been at three jobs this morning and we're steadily rolling in," explained Allen.

Allen believes with the wind being as strong as it has been both Thursday and Friday, it's made more trees in the area fall down.

Much of the day, their crew has had to rig trees, chop them up, and clean up the rest of the area they're taking care of.

"We're going to have calls all through the night and tomorrow. People are just going to start noticing stuff on their house."

Allen thinks it's important you have your trees around your home looked at every few years.

"Everyone, at least every couple of years, should have an expert like us at Expert Tree Care to come out and examine your trees. You should have a professional, even if it ain't us, to look at your trees to see what's safe, what's damaged, what can be removed, just be safe out there."