The restaurant in Cayce was covered in dollar bills, now those bills are going to a great cause. 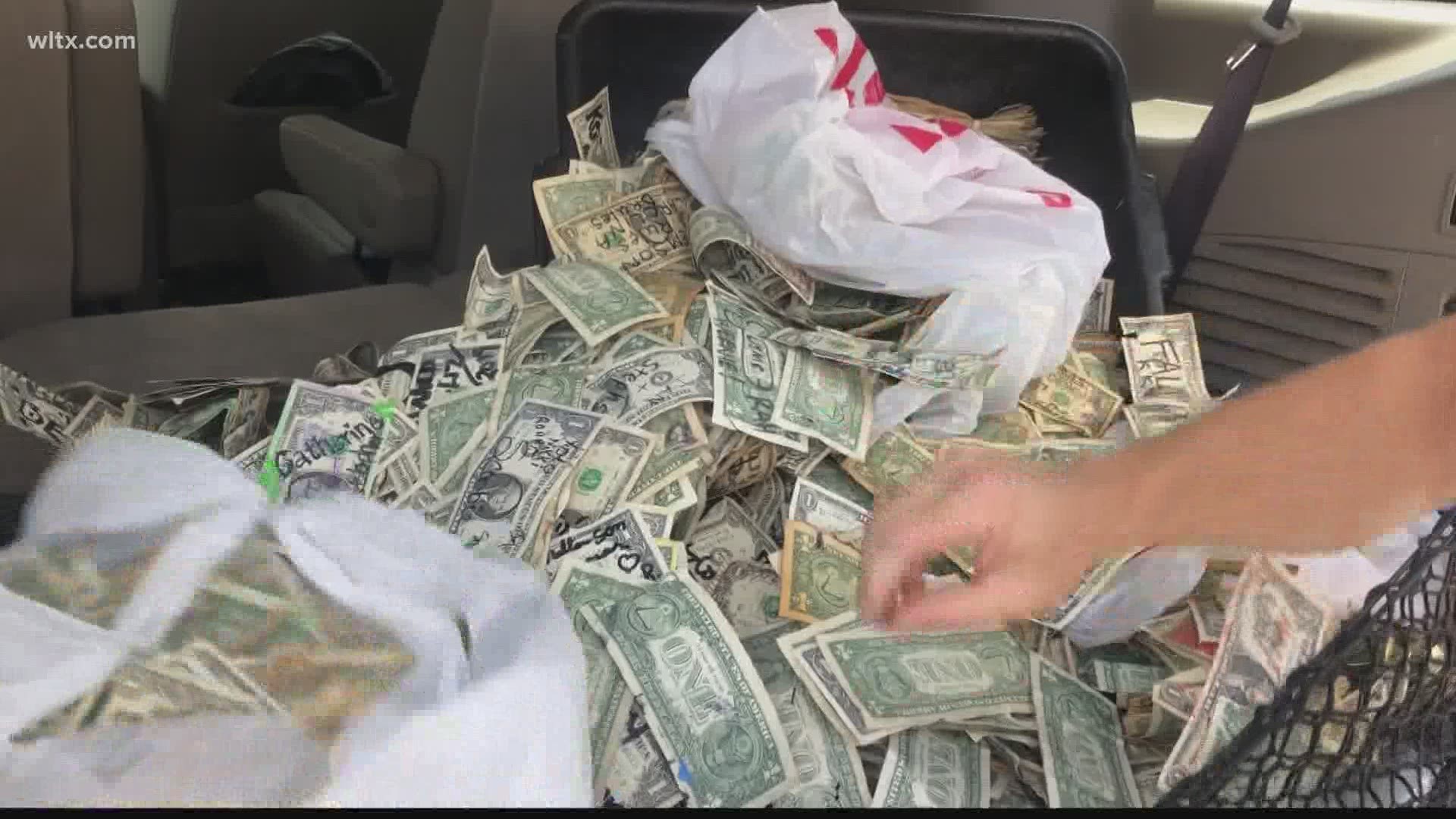 WEST COLUMBIA, S.C. — Bags and bags of dollar bills are currently being counted after years spent hanging from the walls of D's Wings in Cayce.

The popular Lexington restaurant announced late last year that they would be moving into the booming West Columbia State Street District after over 25 years in Cayce.

Then came the question: What do they do with all of that cash?

“It took us all of January to May to get those dollar bills off of the wall," says Billy Rentz, owner of D's Wings since 1995. "I knew that these dollars were not mine," Rentz remembers when thinking about what to do with them.

The about $5,000 dollars’ worth of one dollar bills once hung from the walls of D’s Wings in a tradition that has gone on even before Rentz took over in 1995.

“I was not keeping these dollars," Rentz says. "They’re not mine! These were given by my customers. They’re memories. Every dollar tells a story of somebody’s experience at D’s Wings.”

Billy has a good friend, Ernie Yarborough, who volunteers and is on the board for Prisma Health's Children's Hospital, which runs Camp Kemo, a program for kids diagnosed with cancer and their siblings.

RELATED: After forty years of service to the community, Samuel Tenenbaum announces retirement

It’s no secret that D’s Wings is moving to West Columbia. But what are they going to do with all of those dollar bills that were on the wall?? Find out tonight on @WLTX pic.twitter.com/XqFA4w0rvh

Ernie is a 10-year volunteer at the children's hospital and a long-time volunteer with Camp Kemo. He suggested they donate the dollars to Camp Kemo, “He just went nuts, he loved the idea," Ernie says remembering when he first brought it up to Billy, "and he was always looking for something cool to do with the dollar bills so that’s where we went.”

The staff at Camp Kemo couldn’t be more thankful. Cassie Shea with the program tells us, “It really allows us to do so much to just alleviate some of the stress that our families experience when their child is going through treatment for cancer or a blood disorder.”

I have GREAT and FUN news. The legendary D's Wings restaurant of Cayce is moving just a couple blocks to 415 Meeting...

D’s Wings has a new wall -in their new location that will be opening in June- that they will be called the “Camp Kemo Wall of Hope” where new bills can be hung and where money will be donated for years to come.

D's plans on doing a grand opening and "Camp Kemo Night" on June 10 where the check will be donated to officially to the camp.

Ernie is also planning a Facebook contest this weekend where you can guess exactly how many dollar bills were taken off of the wall.