Samantha Josephson killing: what we now know about the USC student's death

Columbia police delivered a timeline of the events before and after a University of South Carolina student, Samantha Josephson, was killed. 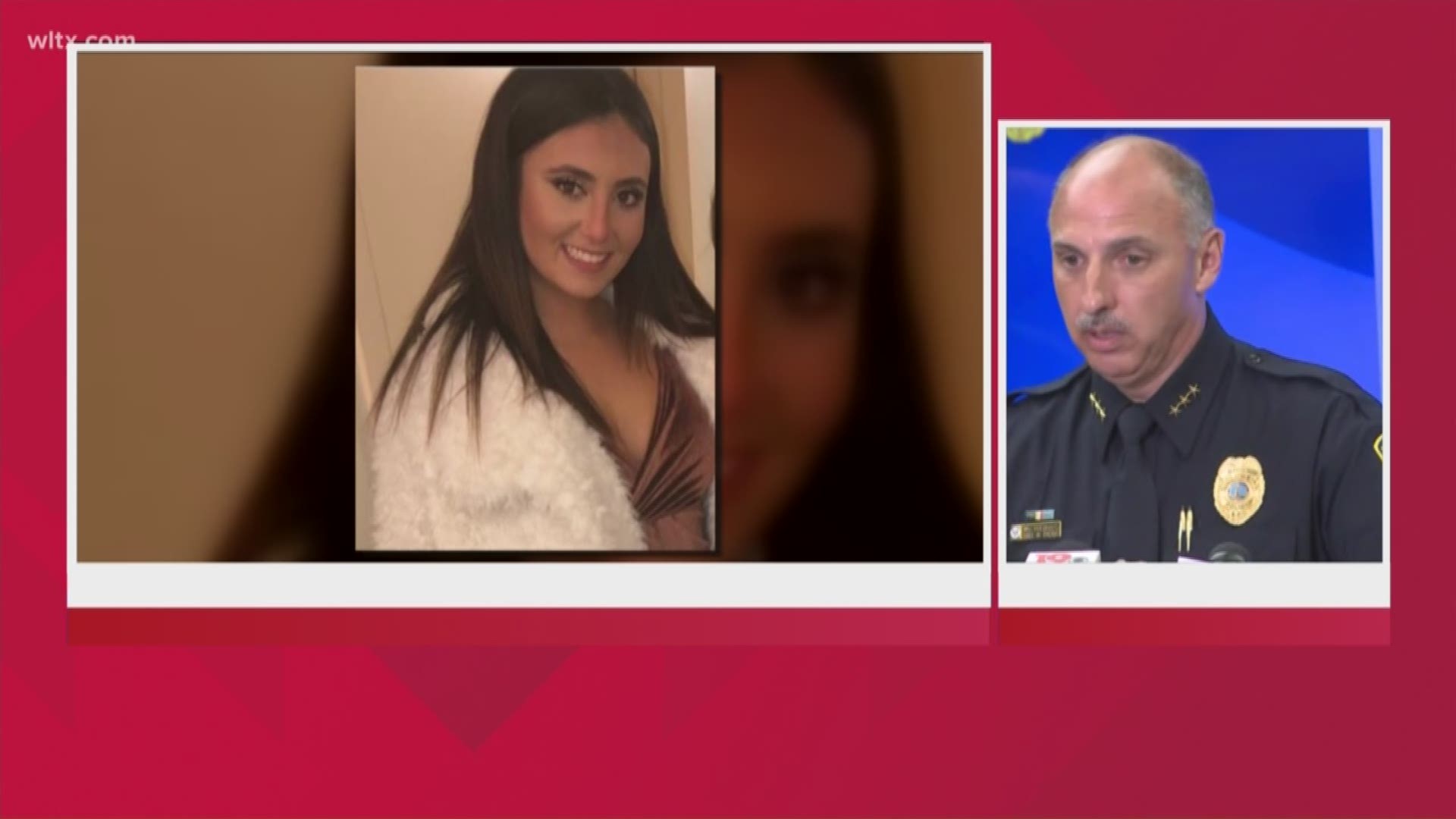 COLUMBIA, S.C. — Columbia police say the man charged with killing a University of South Carolina student killed her, then took her body 70 miles away. A day later, he was back in the same area where he kidnapped her, according to authorities.

Those are just some of the details Columbia police gave Saturday night into the death of 21-year-old Samantha Josephson. Officers say she was killed by 24-year-old Nathaniel David Rowland after she mistakenly got into his car in Five Points, an entertainment district in Columbia.

1:30 a.m. Friday: Samantha Josephson was out with friends in Columbia's Five Points early Friday morning. Holbrook said she got separated from them, however, after they were at the Bird Dog bar at 715 Harden Street.

Investigators say Josephson then used the Uber app to hail one of the ride-share service's drivers.

2:09 a.m. Friday: Holbrook said Josephson saw a black Chevy Impala approach her at a corner in Five Points. She apparently believed that was her ride, and got into the vehicle, and Rowland drove them away from the scene, investigators say.

Holbrook said that was not Uber driver, however.

Surveillance cameras in Five Points show the moments before she got inside, he added. One of those images was released by police hours later, when it became obvious she was missing.

Friday morning (exact time unclear): Josephson lived with several roommates at The Hub, the high-rise apartment building in downtown Columbia that houses many USC students. Her friends became worried when she didn't come home, and began trying to reach her. However, their efforts ultimately were in vain.

1:30 p.m. Friday: When they couldn't get a response from Josephson after hours of trying, her friends called the Columbia Police Department. They immediately began conducting interviews in an effort to find her.

3:45 p.m. Friday: As that search was taking place, two turkey hunters 70 miles away in Clarendon County, SC, discovered Josephson's body in a wooded area. The spot, just off Knowlson Road, is a long, dirt road with farms and woods.

The few people who live in the area say there's little crime, the kind of place where people leave their doors unlocked.

However, Holbrook said Rowland knew this area very well. The suspect had recently lived in the region.

4 p.m. Friday: Investigators began processing the scene where Josephson was discovered. The South Carolina Law Enforcement Division (SLED) was brought in to use their forensic experts to comb the area for clues.

They were later able to positively identify Josephson. In what Holbrook called "the best collaboration" he's seen in his law enforcement career, Columbia police, Clarendon County deputies, and SLED began sharing information on the killings as they worked to zero in on the killer.

5:07 p.m. Friday: As crews continued to look for clues and search for information, a Facebook account believed to be operated by Rowland was continuing to post status updates. None of the posts appear to reference anything related to the killing.

In a previous post, there's a photo of Rowland in front of a black Chevy Impala.

Credit: Facebook
A photo of Nathaniel Rowland on a Facebook page believed to be operated by him.

8:30 p.m. Friday: Columbia police put out a missing person alert for Josephson. It included a photo of her, a surveillance image of her holding her cell phone, and the details that she'd last been seen in Five Points.

3 a.m. Saturday: Holbrook said "an alert K-9 officer" saw a black Impala about two blocks from Five Points. The dog's partner pulled over the suspicious vehicle to check it out. As the officer approached the vehicle, officers say Rowland got out and ran.

The officer was able to catch up with Rowland and detain him.

A female passenger was in the car who police describe as an acquaintance of the suspect. She's said to be cooperating with investigators.

Officers say when they looked at the Impala saw what appeared to be a dark fluid in the vehicle. They got a warrant, and found more of the fluid inside, which tests later confirmed was Josephson's blood, Holbrook said. The blood was also found in the trunk, according to Holbrook.

That wasn't all they found. Holbrook said Josephson's cell phone, along with cleaning wipes and bleach, were also inside.

The chief said the car had a child seat in the rear, and child proof locks on the rear doors were activated, which would prevent someone from getting out.

Officers who'd been working throughout the night on Josephson's case were able to help make connections in the case.

5:13 a.m. Saturday: A little after 5 a.m., Seymour Josephson, Samantha Josephson's father, said on Facebook "Samantha is no longer with us."

It was the first public confirmation that she'd died. The post began being shared by many in the USC community.

He did not mention any of the circumstances of her death.

"Times like these leave me searching for words of wisdom and comfort," he wrote in part. "However, I take solace that the Carolina Family is here to embrace those who are hurting."

Saturday morning, afternoon: Police continued to gather evidence as they worked to get a murder warrant on Rowland. They kept what information they had close to the vest, releasing no information to the public or the media.

6:52 p.m. Saturday: Columbia police held a press conference, announcing the charges against Rowland, and revealing for the first time publicly what they think happened in the hours after the killing.

2:00 p.m. Sunday: Nathaniel Rowland waived his right to appear in court. By law, the magistrate couldn't set bond on the murder and kidnapping charges, so that will have to be dealt with in a circuit court hearing at a later date.

The family of Josephson did attend the hearing, however, and the mother spoke out for the first time. Marci Josephson said she was disappointed the family didn't get to see his "evil face" in court, and said they wanted to make sure people didn't forget their daughter's name.

Holbrook did not mention if investigators have a motive in the killing. It unclear when--or even if--that may be known.