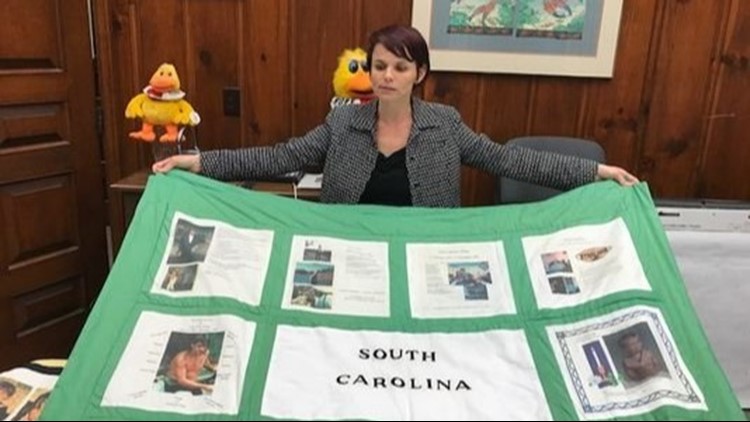 News that the U.S. suicide rate has been soaring — including a 38-percent hike in South Carolina — stunned the nation recently. But for the staff at Mental Health America of Greenville County, which operates a 24-hour suicide prevention hotline, it came as no surprise.

“It’s not a shock to us,” said Susan Haire, director of community engagement and development for the agency, “because ... we’re hearing first-hand from people affected by this.”

That’s because the agency just doesn’t have the capacity to handle them all.

“The demand for services has tripled in the past 10 years,” Haire said. “It’s heartbreaking.”

Suicide is the 10th leading cause of death nationwide, and the U.S. suicide rate has increased 25 percent between 1999-2016, when nearly 45,000 suicide deaths were recorded, according to the U.S. Centers for Disease Control and Prevention.

In South Carolina, the number of suicides per year increased from 419 to 818 during that time, according to the state Department of Health and Environmental Control.

And the numbers are increasing locally as well.

In Greenville County, there were 51 suicides in 1999 and 92 last year, according to the county coroner’s office.

More: Asking why - Suicide rates soar and survivors left with only questions

Experts say there are many reasons for the increase.

One of the main problems is that people contemplating suicide often don’t seek help because of the stigma, said Kathy Eckart, director of crisis intervention at Mental Health America.

“Society tells them they should pull themselves up by their bootstraps or that they have nothing to feel bad about, so they are embarrassed about feeling the way they do,” she said.

“I can imagine people telling Kate Spade, ‘What do you have to feel bad about?’ ” she added. “The point is they do.”

And here in the Bible Belt, staffers often hears the phrase “Too blessed to be depressed,” which adds another layer of guilt, said Haire.

“You’d never say that about diabetes or cancer,” she said.

Out of the Darkness

“There is so much stigma around mental illness, suicide, even accessing care, and we haven’t done much to change it,” said Alexandra Karydi, director of the state Department of Mental Health’s suicide prevention program.

Members of the military and police officers, who are at higher risk for suicide because of trauma or social factors, are particularly affected so they don’t get help, she said.

One of the best ways to combat stigma is to bring mental illness and suicide out of the darkness and talk about it like any other disease, said Dr. Karen Lommel, chief medical officer for behavioral health at Greenville Health System.

“We need to just start talking and ... making it an every day part of our discussions about mental illness,” she said. “And don’t place judgment.”

The Great Recession, which occurred during the CDC study time frame, is another reason for the jump, said Karydi.

“Historically, whenever there’s a financial crisis, there are spikes,” she said. “And we did have one for several years.”

Family isolation, social factors like bullying, a crisis such as the loss of a spouse or a spouse having an affair, also contribute to the suicide rate, she said. Also at high risk are people with chronic pain, HIV and sleep disorders, she said.

Technology can also play a role, she said, because depression in youth has been linked to social media use which is isolating and reduces the abilty to communicate.

“Suicide is not about wanting to die as much as wanting to end the pain,” said Karydi. “You have a critical mass happening on the ... brain that affects the perception, functioning, so solutions are difficult to process.

“A person ends up feeling so lost that the only solution remains death because that ends the pain sooner.”

The availability of guns, which is the most lethal method of suicide, is another factor, Karydi said.

“Over 90 percent of suicides in South Carolina were gun-related,” she said. “There are fewer deaths in states with less access to guns.”

Places with bridges have higher rates of suicide as well, she said.

And some people use alcohol or drugs to deal with their issues, which can cause them to act impulsively without intending to, Lommel said.

One thing all the experts point to as impacting the numbers is inadequate mental health services.

If people can’t get help because of a shortage of mental health care providers, a dearth of psychiatric hospital beds, and overburdened outpatient services, experts say they can feel hopeless and isolated.

And after being near the bottom in terms of access to care for several years, South Carolina was ranked 50th in the nation this year by Mental Health America, Haire said.

“South Carolina is one of the worst states in the country for access to behavioral health care,” she said. “And it’s getting worse.”

A lack of transportation to mental health and medical resources is another factor, Karydi said.

“You can have the bricks and mortar, but can the person get there?” she said. “Rural counties have the highest suicide rates because they tend to be more isolated. And we are still quite rural in South Carolina.”

Deficit in the Upstate

Lommel said the state “is at the bottom” when it come to access and that “there’s definitely a deficit in the Upstate.”

For example, in 2017 there were just 54 psychiatrists in Greenville County, the most populous area of the state, compared with 125 in Charleston County, according to the South Carolina Office for Healthcare Workforce.

And of the private psychiatrists in the area, many have gone to cash-only practices, leaving those of limited means without access.

“We do hear on the CRISISline that access to care is a huge need,” said Haire. “For folks who don’t qualify for insurance, there is a need. Or perhaps somebody does have insurance but because of the severity of their illness and level of insurance, they are not able to access as much as they need.

“And we know that low-income individuals are most affected by access issues.”

Hospitals, which accept insurance, are trying to recruit more psychiatrists and nurse practitioners, but they’re in great demand because they are in such short supply, Lommel said.

“We need a significant number of providers here,” Lommel said. “Anything is better than what we have now because there’s such a deficit.”

Hospitals are also partnering with one another to share their limited services and providers to reach more patients, she said.

To stretch exisiting assets even farther, she said, psychiatry residents are working in community mental health centers a couple days a week as well as at Patrick B. Harris Psychiatric Hospital in Anderson County. That not only improves patient access, but facilitates training for residents, she said.

Meanwhile, a crisis stabilization unit is about to open in Greenville and the state is getting ready to launch the Community Crisis Response & Intervention program for nighttime emergency psychiatric interventions.

The state Department of Mental Health serves about 100,000 people, 30 percent of whom are children, through a network of community mental health outpatient centers and clinics as well as inpatient hospitals, a community nursing care center, and three veterans’ nursing homes.

But with a grant from the federal Substance Abuse and Mental Health Services Administration, DMH is trying to tackle suicide prevention, said Karydi.

With a staff of five, efforts include awareness campaigns and peer training in schools, as well as teaching others to provide that training, she said.

“We’ve trained over 8,000 people in the last two years,” she said, “with groups like NAMI (the National Alliance on Mental Illness), MHA and other advocacy groups, faith-based communities, schools, and law enforcement.”

Another program, called Zero Suicide, is aimed at screening patients for suicide when they see a medical doctor or a mental health care provider because most suicides occur after someone has seen a doctor but wasn't identified as needing help, she said.

Used in multiple medical systems nationwide, it was shown over four years to reduce suicide rates by 75 percent at one system in Michigan, she said.

But while the number of people needing help is on the rise, MHAGC’s funding isn’t.

The agency — with eight full-time equivalent employees and just under 20 volunteers — gets no state, county or federal funding for its suicide prevention hotline, Eckart said, but operates on grants and donations, which haven’t increased in years.

“We are just treading as fast as we can without any additional funding,” she said.

As an anonymous service, MHAGC is attractive to people struggling with issues, Haire said. But that anonymity means a low profile in the community and therefore fewer opportunities for donations and community engagement.

“It’s becoming an ethical issue. If we’re already missing almost 50 pecent of the calls we’re getting, then do we advertise for people to call when we don’t have the resources?” Haire said.

“We try to be as creative as we possibly can,” she added. “Many of our phone workers are volunteers. But to be prepared, they have to complete about 80 hours of training. And to make that cost effective for us, we ask for a one year commitment of 350-400 hours in a year.”

Community education is another need.

The suicide rate among teens and young people is increasing at an “alarming rate,” Haire said, adding that nationally, one out of four 14-year-olds already has a diagnosable mental health condition.

But if resources are used to talk to teens about bullying, for example, that means fewer people to answer calls from people on the verge of suicide.

And while the number of calls answered has been consistent because funding hasn’t changed, the number missed has gone up exponentially, Haire said.

“We hear every day from people who say, ‘I’ve been trying to call for hours. I’m so glad that we can talk,’ ” she said.

And whenever there’s a high-profile suicide, such as the recent deaths of designer Kate Spade and celebrity chef Anthony Bourdain, there’s an increase in calls, Eckart said.

Many callers have a health care provider and medication, but no support between appointments, she said.

“We offer that in-between support,” she said. “Talking is what takes them over that safety hump.”

But both Haire and Eckart said more emphasis must be placed on addressing the issues underlying suicide if there’s to be an impact on the rate of these deaths.

MHAGC just got some federal funds to launch a reassurance line in the hopes of tackling issues that precede suicide, such as medication reminders and other assistance or just for isolated people to have someone to talk to, Eckart said.

It also recently got some federal money to fund AmeriCorps volunteers who work to secure funding, do outreach and produce a community needs assessment, all of which is designed to increase access to mental health care in Greenville County in the future, Haire said.

Investing in the Future

“The temptation is to put your resources to meet every-day demands, but you can’t just be taking care of immediate needs,” she said. “What we’re finding is that when we continue to do so, we’re not able to respond to current demand, but also not preparing for future demand.

“If we don’t invest in our capacity as an organization,” she added, “then we’re not going to be able to meet the need in 10 years.”

Meanwhile, the United Way of Greenville County has launched a behavioral health task force modled on a similar effort in Spartanburg County resulted that resulted in a collaboration of hospitals, schools, nonprofit and other groups that improved services, Haire said.

MHAGC also hopes to work with churches and other faith-based institutions in the next year to identify partnership and volunteer outreach opportunities.

“We need as a community to do more,” she said. “Until we as a county look at the issue holistically and make an investment from all angles, we’re not going to be able to move at all.”