The park, near completion, sits in the same neighborhood where the officer grew up. 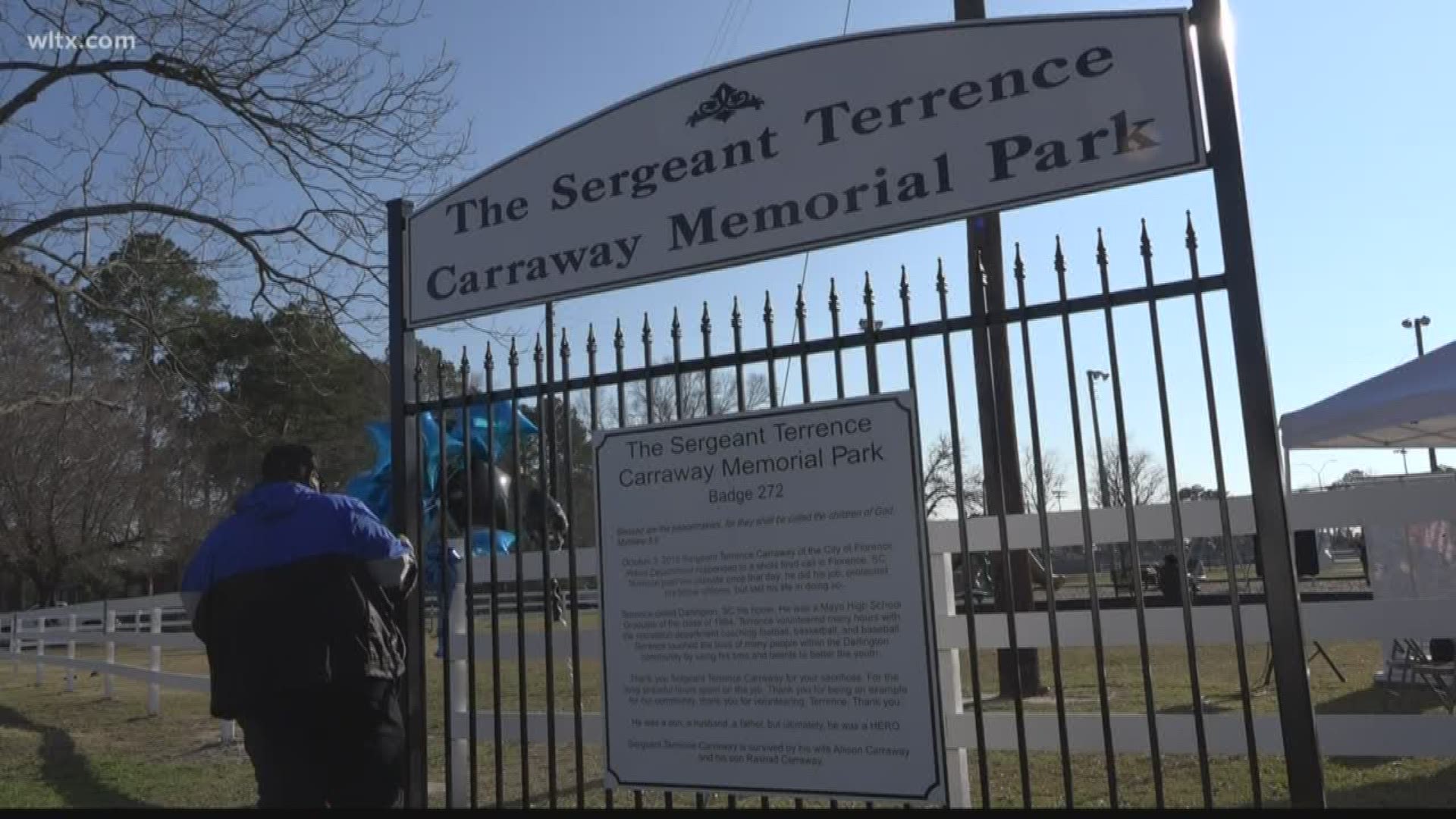 DARLINGTON, S.C. — The Darlington community officially welcomed a new addition to the city. It's a park named after a hometown hero.

Sgt. Terrence Carraway of the City of Florence Police Department died in October 2018 while responding to a shots fired call in Florence.

"Terrence was a hero, a strong hero. He stepped up to the plate to run and help Farrah and the Florence Seven who got shot," said Darlington Mayor, Curtis Boyd.

Now, in the neighborhood where he grew up, Carraway's name and biography welcome visitors to the park.

"We have a park over here now. We have a park, and being able to name this park after Terrence...Wow," said Cisco Reed, a friend of Carraway. "Terrence is looking down on us with a smile today."

The park sits off Magnolia Street, which used to be home to a baseball field. It now has a new playground, swing set and a basketball court.

"We grew up in this particular neighborhood, so we know what it's like not having a lot and not having things to be able to expand our horizons as kids. Now the youth, and generations behind us are able to enjoy it," said Daniel Blathers, Sgt. Carraway's brother.

Carraway's heart was with the children of his hometown. He volunteered his time coaching, helping guide the youth to their potential.

"What he did was not just for at that moment, but for the future," said Blathers. "We are here to carry on that legacy, to provide that inspiration to our kids and give them a way out."

Dozens attended Thursday's ribbon cutting. Some made the trip from out of town to honor their friend.

Around 4 p.m., when the ceremony began, it was a busy time in the park. Children were on the swings and shooting hoops on the court.

That's the vision, city leaders say: A park that gives children the opportunity to play in a safe place.

"Let's enjoy our park, keep it clean and safe and full of love for our community," said Darlington Councilwoman, Elaine Reed. "This is only the beginning of restoring the City of Darlington to its proper status: A pearl of the Pee Dee."

City officials say the next project for the property is a pavilion, and possibly a stage to do gospel in the park.

"We knew that my brother lived a good life and he did it serving others," said Blathers. "It's an unfortunate situation, but we have to pray and keep going. God has blessed us with an angel in Heaven to look out for us."