Lawsuit alleges AG retaliated against staff when they reported it to law enforcement. 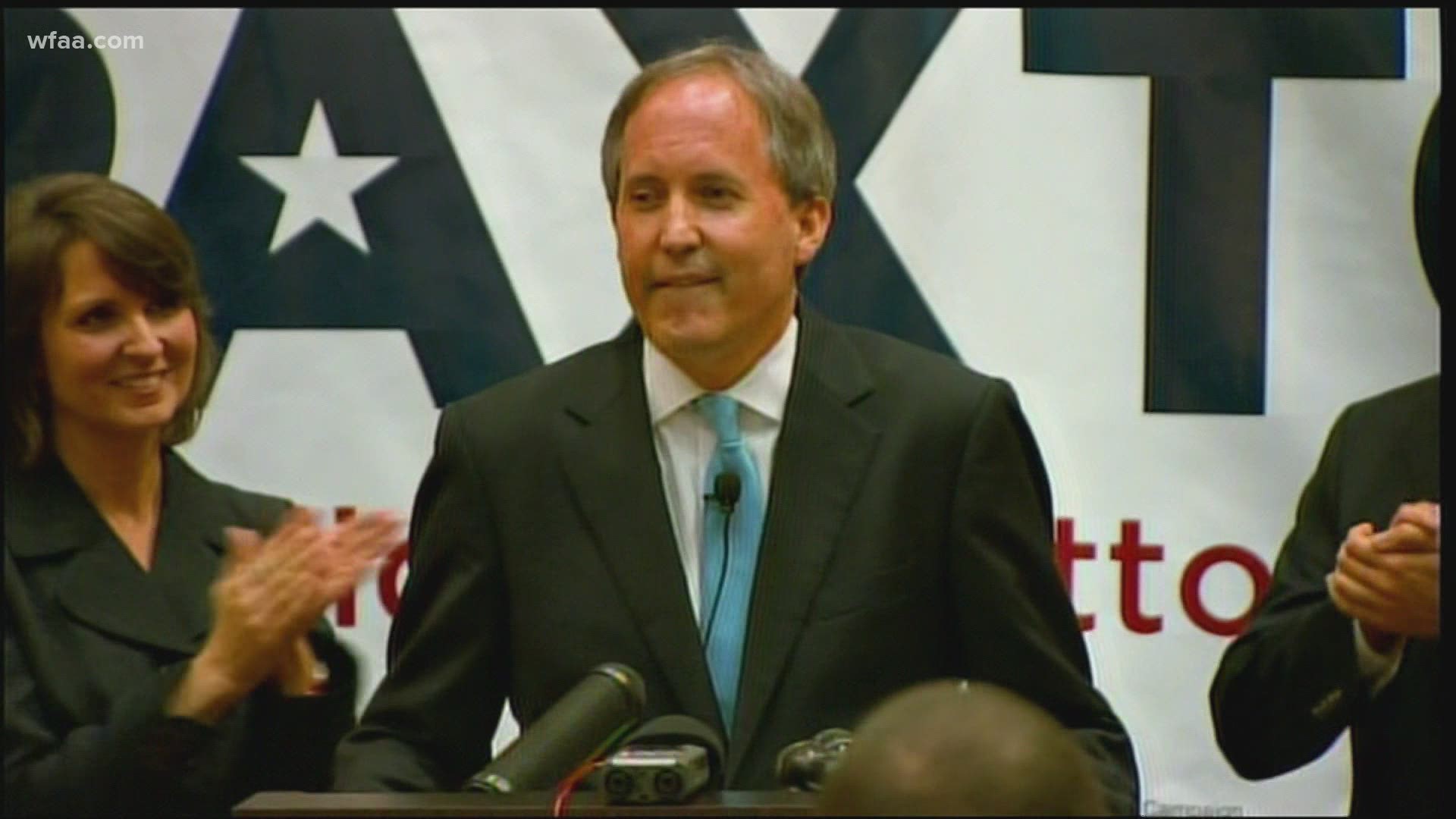 Four high-ranking members of Texas Attorney General Ken Paxton's office filed a whistleblower lawsuit Friday against him. The lawsuit accused the state’s top law enforcement officer of systemically using the powers of his office to benefit a friend and campaign donor, and then retaliating against them when they reported it to law enforcement.

WFAA asked Paxton's press office for comment Friday, but got no response.

The suit describes the systemic retaliation that they say quickly followed after they came forward with their complaints: Job duties removed, being excluded from regular meetings, the sudden presence of an armed guard in the office and being placed on leave without explanation.

Brickman, Maxwell and Penley were fired. Vassar remains employed by the office, but on leave.

They allege Paxton has broken numerous laws, including the state’s bribery statute.

Paxton has denied any wrongdoing and issued statements accusing them of being “rogue employees.”

The allegations swirling around Paxton have resulted in a mass exodus of some of the office’s most senior staff. Jeff Mateer, Paxton’s first assistant, resigned after accusing Paxton of breaking the law to benefit Austin businessman and real estate investor Nate Paul.

The lawsuit details the close ties between Paxton and Paul.

It says they met regularly in 2020, usually without Paxton’s security detail. Media outlets have also reported that Paxton had an “extramarital affair” with a woman who he recommended Paul hire, which Paul did.

The plaintiffs say that in the spring and summer of 2020, Paul began pressuring them to use the resources of the AG’s office to advance Paul’s interests. When they objected, the suit said, Paxton wouldn’t listen.

The most serious accusations involve allegations that Paxton attempted to use the power of the AG’s office to investigate Paul’s enemies.

In May, the suit says, Paxton contacted the Travis County District Attorney and asked for a meeting to help Paul present a criminal complaint. Paxton attended the meeting along with Paul and his attorney.

Paul’s complaint accused federal and state law officers, a federal magistrate judge, and a federal prosecutor of violating his rights, and altering documents. The DA referred the case to Paxton’s office, and Paxton assigned Maxwell and Penley to investigate, the suit says.

Maxwell and Penley met with Paul and his attorney but soon concluded there was no evidence state laws had been broken. They recommended the investigation be closed, which made Paxton unhappy, the suit said.

According to the lawsuit, in September, Paxton took the step of ordering that a special prosecutor be hired to look into Paul’s complaints. The suit says Penley – then the deputy attorney general for criminal justice – refused to sign the memo approving the hiring. The suit also says Penley believed that Paul’s “claim alleging alterations to search warrants was unsupported by credible evidence.”

The lawsuit says the whistleblowers later learned that Paxton asked the special prosecutor to start work before the contract had been approved.

“The subpoenas shocked the whistleblowers because they were highly inappropriate and far outside the bounds of any reasonable investigation,” the lawsuit says. “Paxton and Paul were using their so-called ‘special prosecutor’ to bring the weight of the OAG to bear on Paul’s enemies.”

In the fall of 2019, Paul’s attorneys filed open records requests with the Texas Department of Public Safety asking for records related to the FBI searches of Paul's home and business interests. The FBI filed a confidential brief with the AG outlining why the information should not be released.

The lawsuit states Paxton contacted Vassar – then deputy attorney general for legal counsel – several times and told him that he had spoken with Paul and that Paxton did not want to use the AG’s office to help the FBI or DPS in any way.

The suit says Paxton took the file including the documents Paul was requesting and kept them for about a week. It included documents that had been sealed by a federal court.

Paxton also ordered that when the opinion was issued in June that the office take no position on whether the documents should be released – a move that is far outside the norm for how those types of requests are handled by the AG’s office.

When Paul’s lawyers sought a copy of the FBI’s confidential brief, the suit says, Paxton directed Vassar to find a way to release it. A July opinion concluded it should be released – again not in keeping with the way that type of request would be handled.

The lawsuit also goes into great detail about how Paxton ordered members of his office to intervene in a civil suit involving Paul and an Austin charity.

That charity, the Roy F. and Joann Cole Mitte Foundation, invested in Paul’s businesses. In 2018, the foundation had sued Paul, alleging it was being denied access to the books and records of his companies. A court later appointed a receiver over entities controlled by Paul.

The lawsuit says Paxton began taking a “personal interest in the case” and began having discussions about intervening in it. Members of his office objected but over their objections Paxton directed his staff to intervene in the case in June, the lawsuit says.

Paxton later asked Brickman – his then deputy attorney general for policy and strategy initiatives – to review the case file in early July. Brickman told Paxton that office should not get involved. Later that month, the suit says, then First-Assistant Jeff Mateer and Brickman talked Paxton out of personally appearing in Travis County district court in connection with the lawsuit.

In late July, Paxton contacted then-Deputy First Assistant Attorney General Ryan Bangert and asked him to look at whether restrictions on in-person gatherings due to COVID prevented the foreclosure sales of properties. He told staff members, the suit says, that he wanted an opinion issued that “foreclosure sales should not be permitted to continue.” It was issued Aug. 2.

The lawsuit says the plaintiffs would later learn that that legal opinion favor real estate investors like Paul “who hoped to stave off foreclosure sales.” The lawsuit says that media outlets reported that the day after the opinion was issued, Paul’s lawyers showed his creditors a copy of the opinion to prevent foreclosure sales of Paul’s property, which had been scheduled for the next day.

On Sept. 30, Brickman, Maxwell, Penley, Vassar, along with three other deputy attorneys general and the First Assistant Attorney General Jeff Mateer reported to law enforcement that they believed Paxton had broken the law. The next day, they reported it to the AG’s Human Resources Division and to Paxton himself.

All but Vassar have since resigned or been fired.

The Texas Whistleblower Act “protects public employees who make good faith reports of violations of law by their empower to an appropriate law enforcement authority.” The laws forbids an employer from suspending or terminating or taking “adverse personnel action” against a public employee.

On Oct. 2, Penley and Maxwell were placed on “investigative leave.” Their email accounts and building access badges were disabled. Paxton refused to tell them what was being investigated, the suit says.

Paxton’s office soon issued statements to the media alleging the complaint filed against Paxton “was done to impede an ongoing investigation into criminal wrongdoing by public officials.”

“Making false claims is a very serious matter and we plan to investigate this to the fullest extent of the law,” the statement said.

The whistleblowers say this statement and others were clearly intended to “intimidate and retaliate” against them and was an orchestrated effort to “mislead the public” into believing they were the ones under investigation, not Paxton.

Days after filing the complaint, Paxton’s new first assistant, Brent Webster, ordered Brickman to leave a meeting in front of other senior staff members, the suit says. Later that morning, Webster arrived at Brick’s office with an armed peace officer. The suit says Webster requested to speak alone with Brickman, which he declined to do.

On Oct. 20, Webster told Brickman to meet him at his office to discuss Nate Paul matters, the suit said. When he got there, an armed guard and an HR employee were present. He was then fired, told he had been “insubordinate” and was stripped of his state-issued laptop and cell phone, it says.

Brickman -- a former chief of staff to the Republican governor of Kentucky – had moved to Texas to take the job in early 2020. Paxton had previously presented him with a book inscribed with a note saying he was “so grateful (Brickman) joined our team,” the suit says.

On Oct. 19, Vassar got an email asking him to attend a meeting in Webster’s office, the suit said.  With an armed guard outside, Webster told him he was placing him on investigative leave, the suit said.

Vassar asked by he was being investigated. Webster refused to answer and said the investigation was “open-ended.” He then directed him to leave his agency-issue laptop and cell phone on his desk. Webster and the officer escorted him to his office to pick up his personal belongings and then the officer escorted him out of the building, the suit said.

Vassar, the suit says, has been stripped of all “responsibility, placed on leave and constructively dismissed,” the suit says.

On Nov. 2, Penley and Maxwell were ordered to attended a meeting with Webster, the suit says. They say Webster refused to tell them why they were on leave and denied Penley’s request for a witness to the meeting.

“Instead, Webster proceeded to interrogate Penley and Maxell in a hostile and aggressive manner,” the suit said.

Maxwell and Penley were then fired, it says.

Maxwell – who had led the law enforcement division for a decade --  oversaw 350 employees and had served as a Texas Ranger for 24 years.

Paxton’s office has since announced that it was concluding the special prosecutor’s investigation into Paul’s claims.