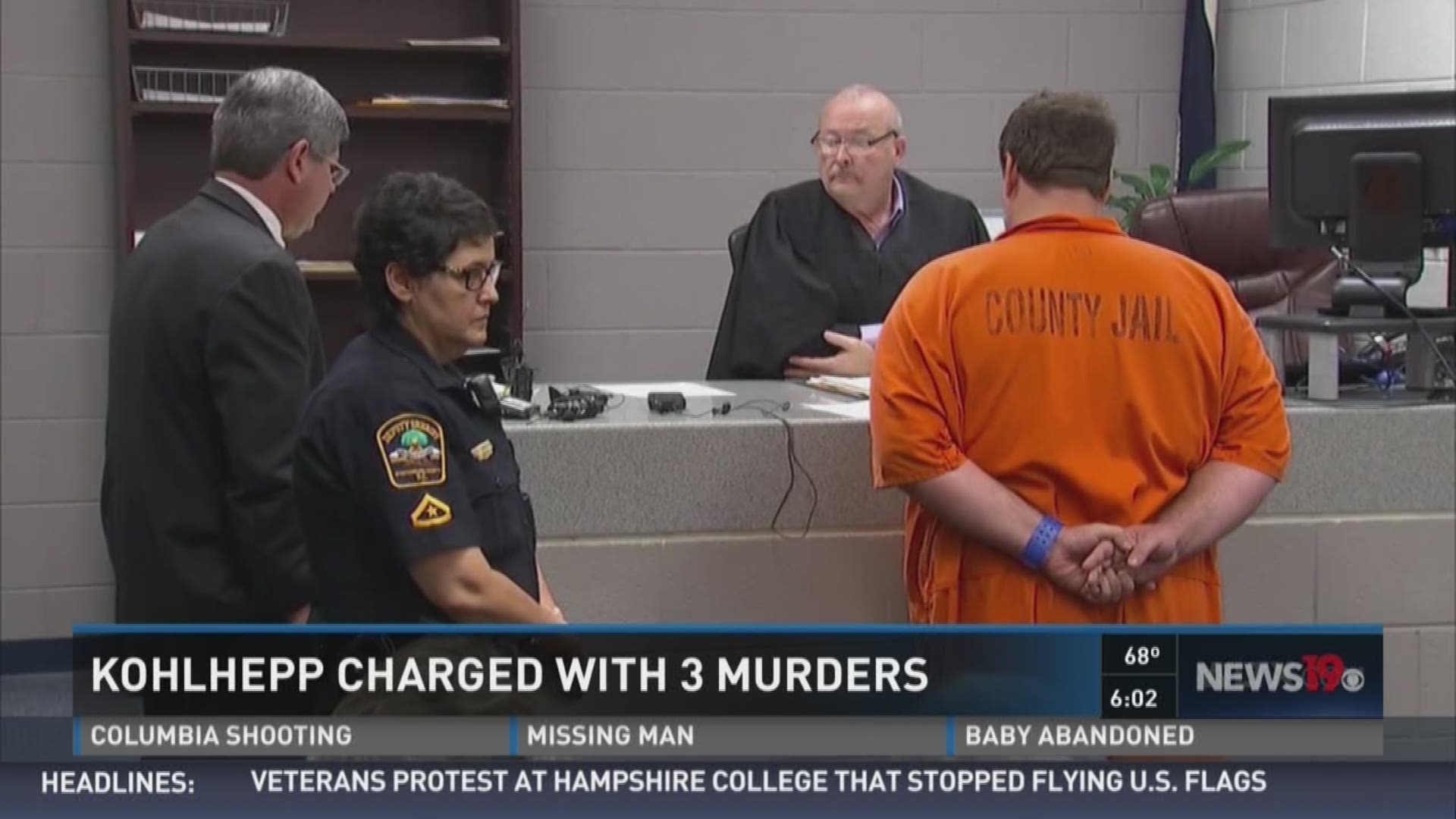 nvestigators on Monday signed seven new warrants on Todd Christopher Kohlhepp in connection with the deaths of three people who were found earlier this month on his property in Woodruff.

Authorities charged Kohlhepp, 45, with three counts counts of murder, three counts of possession of a weapon during the commission of a violent crime and one count of kidnapping in the deaths of Charlie Carver and married couple Johnny and Meagan Coxie, the Spartanburg County Sheriff's Office said.

Kohlhepp, who lived at 213 Windsong Way in Moore, is linked to seven deaths, including the slayings of four people in 2003 at Superbike Motorsports in Spartanburg County.

At this stage of the investigations, it appears that Carver and Johnny Coxie went to Kohlhepp’s property voluntarily, which explains the absence of kidnapping charge for both of them, Lt. Kevin Bobo said.

Kohlhepp, a former real estate agent who grew up in Arizona, is being held at the Spartanburg County jail. He was scheduled to appear before a magistrate judge at 9 p.m. Monday for a bond arraignment on his latest charges.

Kohlhepp was charged with four counts of murder in connection with the shooting deaths of Scott Ponder, Beverly Guy, Brian Lucas and Chris Sherbert at Superbike Motorsports — about 13 years before investigators started to find evidence this month that led them to believe Kohlhepp was a serial killer.

On Nov. 3, investigators were on Kohlhepp's property near Wofford Road when they heard banging. They found Kala Brown alive but inside a large metal container and "chained like a dog," Spartanburg County Sheriff Chuck Wright said.

She was kept there for two months and had worked for Kohlhepp before she disappeared. He was charged with kidnapping Brown.

In the days after Brown was rescued, Kohlhepp confessed to the Superbike shootings and investigators found the bodies of Carver and the Coxies on his 95-acre, rural property in Woodruff. The case has garnered national and international headlines, and police in Arizona continue to search through unsolved homicides to determine if Kohlhepp has connections to any of those cases.

Kohlhepp already had a criminal history. As a teenager, he used his father’s handgun to force a 14-year-old neighbor to walk to his home, where he placed duct tape on her in his bedroom, tied her hands and then raped her, according to court documents. He was convicted in the case and served 15 years in prison before moving to the Upstate.