No injuries and students expected to report back to school on Wednesday with many students going to the old vocational school for classes
Author: WLTX, Danielle Miller (WLTX)
Published: 4:08 PM EST January 12, 2020
Updated: 4:13 PM EST January 13, 2020

KERSHAW COUNTY, S.C. — A tornado touched down Saturday night in Kershaw County and damaged a high school, football stadium, and buses, but no one was injured.

The tornado touched down Saturday night according to the National Weather Service and struck North Central High School's property.

The weather team is still evaluating the track but have determined it was a high end EF-2 Tornado. Richard Okulski, Meteorologist in Charge at the National Weather Service Columbia office, said the preliminary estimate for wind speeds is around 130 miles per hour.

The tornado began near the intersection of Lockhart road and Keys Lane according to the National Weather Service.

The impact on the school is immediately evident and is extensive. The roof was blown off of part of the building and damage was done to multiple classrooms. The stands in the football stadium were torn up and a goal post was bent over. In the bus barn nearby, several school buses had heavy damage. Trees near the track were snapped.   Concrete stadium bleachers were collapsed along with the press box.

The tornado continued along across the gym lifting all the HVAC units off the roof.  The tornado lifted the roof off most of the main building and an older auditorium, then collapsed an exterior wall along a portion of the west side of the building.

It moved four school buses and resulted in broken windows and other damages to the 25-30 school buses parked there.  Two large light stands near the baseball field were damaged.

The tornado's path was about a half a mile and about 150 yards wide.

Kershaw County Schools spokesperson Mary Anne Byrd said the State Department of Education is assisting with bus replacements and will be sending students from North Central to an older vocational school about ten minutes away that wasn't being used to send students in light of the damage to the school.

Students in the district were scheduled to be off on Monday and Tuesday due to teacher planning purposes.

Byrd said that the entrance to the school was damaged, along with significant damage to the football stadium, concrete bleachers, and the bus fleet located on the campus. From visual inspections, all of the buses on site except for three  had some form of damage to them. 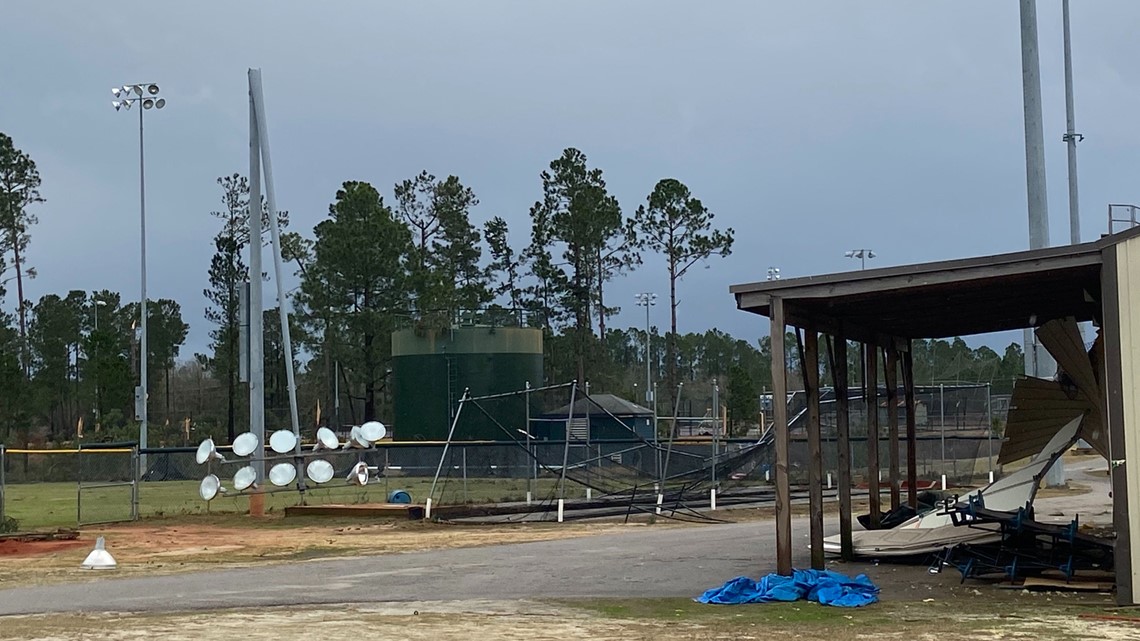 "Fortunately, no one was here on campus so all the damage is physical," said Byrd, "It's buildings, it's buses, it can be replaced."

No word yet on a damage estimate.

Lara Broughton, an English teacher at the school, was shocked to see the damage Sunday afternoon, saying "the pictures on social media do not do it justice. And then, when you get here and you really see how bad it is, it is completely devastating."

School officials caution that NO GofundMe sites or any other fundraising has been set or or being done.

The South Carolina State Guard was called in to help secure the site and will be stationed at the school for the next 48 hours, according to LTC Scott Malyerck. Guard members are trained law enforcement officers, says Malyerck, and will be working with local law enforcement agencies and emergency services to make sure the area is safe.