The October floods of 2015 destroyed many homes, dams and roads in the Midlands 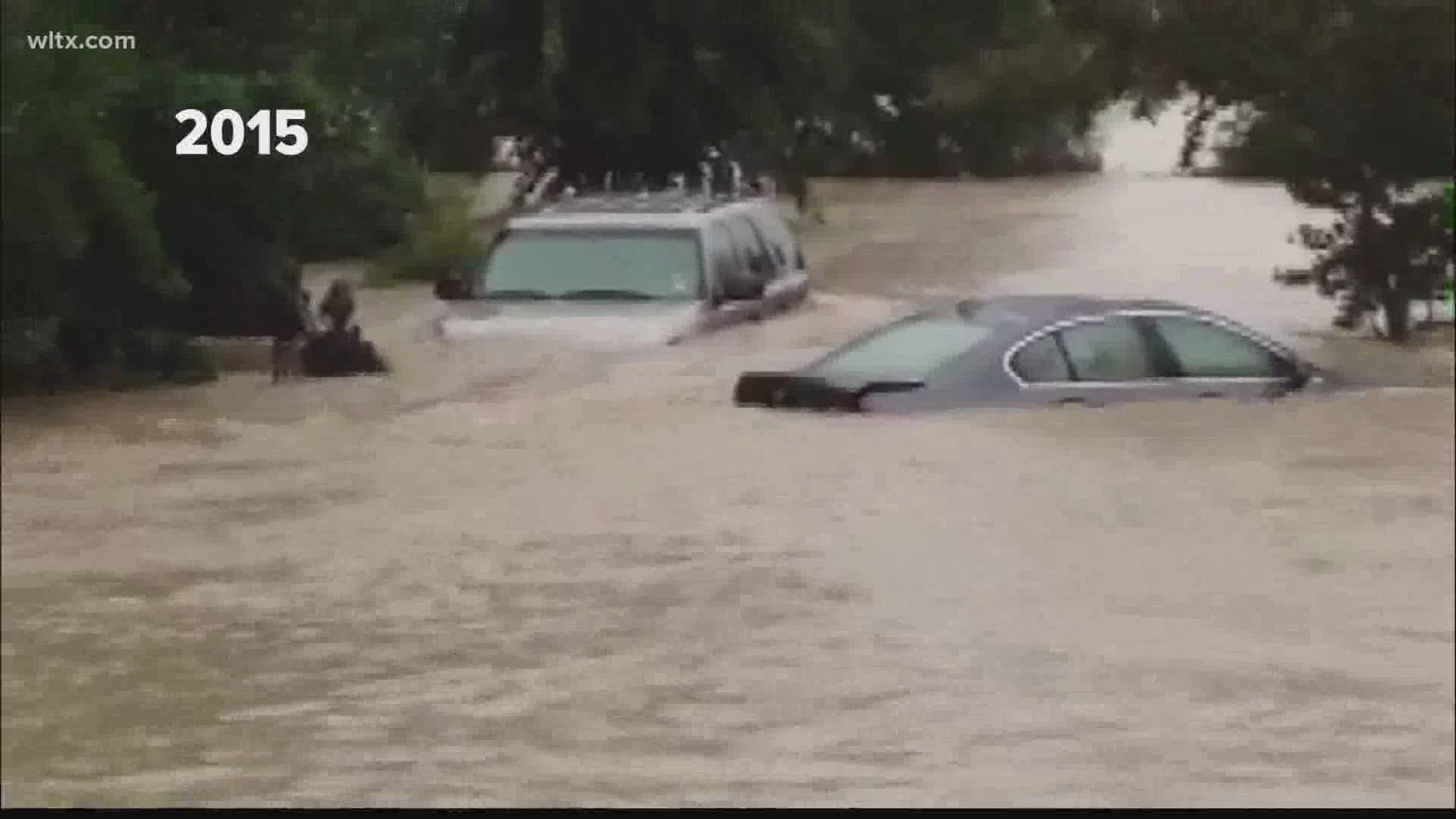 LEXINGTON, S.C. — The Town of Lexington community took time to Sunday to remember the five-year anniversary of the 'Thousand Year Flood' that devastated the Midlands.

Flooded streets and buildings underwater are the images many remember when they think back on the flooding that devestated parts of the Midlands.

Many people will remember the Garners Ferry road and Devine street area in Columbia where the Title Max and Subway buildings were engulfed in water.

Many families had their homes destroyed and were forced to start over.  Many had to find a new place to call home.   .

Danielle Jelensperger, who lives in Lexington, remembers the heavy flooding that hit the area.

"This one was obviously historic and just a lot of water, water everywhere," said Jelensperger. "Just pretty crazy seeing so much water. I'm just glad that everything is kind of restored to where we are today."

One of the hardest hit area from the October Floods of 2015 that you can see today is in the Town of Lexington.

The Old Mill area was hit with heavy flooding after its dam broke. Many of the lower floors on the property were three to four feet underwater.

Doug Seidenstricker, who's a manager at Old Mild Brew Pub, says it was crazy to see.

"This mill was devastated," said Seidenstricker. "It had four to five feet of water downstairs but before the dam, we had some water upstairs and everything obviously went into the basement."

Seidenstricker says his wife owns a business at the property and she was impacted as well.

"It was a power of nature and the town kind of came back together and built us back up," explained Seidenstricker.

Laban Chappell is one of the family owners of the Old Mill property in downtown Lexington. His father-in-law, Ryan Condon, bought the area back in 2004 and Chappell started working with him in 2005.

Chappell says he remembers the mass-destruction the flooding brought to the area.

"Boy, I can still picture it all like it was yesterday," said Chappell. "In fact, just being around the construction site now, I think about it often."

Chappell says fortunately the structure is made up of granite walls and concrete floors and is a strong building.

Initially after the flooding, people helped get rid of sheet rock, insulation, and tore carpets out of the building.

"There was a great deal of shoveling mud out of a lot of different areas where it kind of stayed around," said Chappell. "It was pretty messy."

While many people will remember the flooding and devastation the storm brought to the Midlands, Chappell says he always comes back to neighbors helping neighbors in their times of need.

"I think about the good things. I think about all the people in the community came out the following day and the weeks after," explained Chappell. "Just the hundreds of people that came on site to volunteer, that's really what I kind of go back to."

Places like Watershed Fellowship and other people in the community came out to help clean up the mess flooding left behind.

Fast forward five years later, contractors are working on rebuilding the dam that was destroyed during the flooding five years ago.

Chappell, who owns the dam, says it took a little bit of time for them to come with a plan to rebuild it in regards to today's standards.

"It turns out the way they built dams a long time ago was almost the opposite of how we do it now," said Chappell.

Back in October 2019, Chappell says they finally received the permit from DHEC to start working on rebuilding the dam.

They waited a little while due to the weather and rain Lexington has experienced recently and now have started construction to raise the dam up.

The Town of Lexington announced recently they are planning on building a walking trail around the pond once the dam is rebuilt.

The town and the Old Mill property owners have been in talks with them about it for about ten years. Due the October Floods of 2015, they were setback a little bit but they think the idea will turn into a reality soon.

"Now that we're underway with (building the dam), I think we're kind of hopeful to be looking within the next year or so, what can we do on some property that we have there that would be a benefit to the community as well," explained Chappell.

If the weather is good, the owner believes the dam will be completed in about two or three months time. They think the water will probably not be raised up until summer time in 2021.

Over the years, new businesses have come to the property, including Hazelwood Brewing Company.

"We just kind of hope that as we kind of get out of dam construction, that we can kind of get back to maybe doing two or three projects around the mill to just improve the property, whether it's traffic flow or aesthetics," said Chappell. "We just kind a handful of projects. It's an old mill, there's always a project to work on. We're just hopeful that we can get back to doing some of the things that we really wanted to do five years ago."

The owner says next year they hope to have a fun gathering for the community to celebrate how far they've come since the thousand-year flood in 2015.