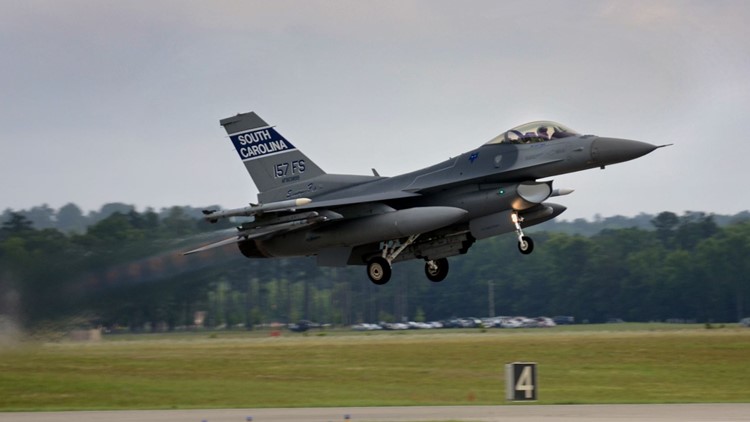 What's that noise? Training operations increase at McEntire Joint Base

Anyone living in and around the city of Columbia and the surrounding area of Lake Murray will continue to see and hear increased F-16 Fighting Falcon fighter jet air traffic for the next several weeks from the South Carolina Air National Guard’s 169th Fighter Wing.

“Due to some current limitations on the availability of training airspace, we've had to adjust where we conduct our training,” said Col. Akshai Gandhi, commander of the 169th Fighter Wing. “For the time being, residents not accustomed to seeing our magnificent aircraft in flight may have the opportunity to do so as we continue flight operations departing and returning to McEntire [JNGB].”

Officials say pilots from the 169th Fighter Wing train for a variety of mission skill sets in order to maintain combat-readiness for the defense of the state and nation. Additionally, the unit provides around-the-clock Aerospace Control Alert for the defense of our homeland, while also responding to state and national emergencies as directed by the Governor of South Carolina.

Recently, Airmen and Soldiers of the South Carolina National Guard teamed up with the South Carolina Department of Health and Environmental Control to deliver much-needed medical supplies to all 46 counties as the state continues its fight to protect South Carolinians from COVID-19.

“We appreciate the understanding of our neighbors here in the surrounding areas of Columbia and Richland County, for recognizing the important role our base plays in our nation’s defense and support of state emergency response efforts. That being said, every measure to reduce the amount of noise associated with the continued training of our pilots has been taken,” said Gandhi.