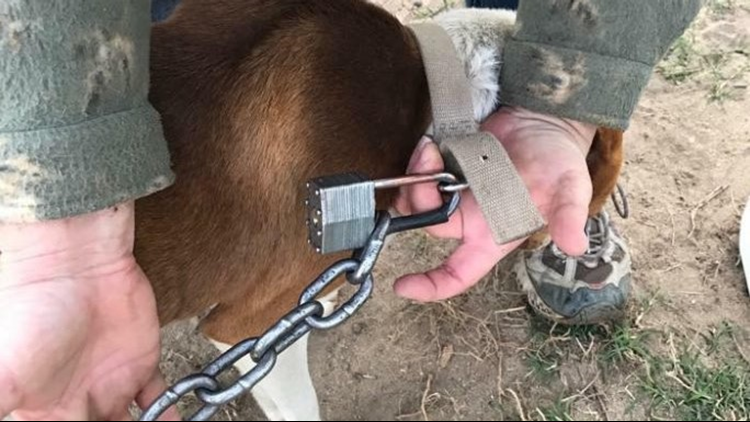 Photo by: Saving the Chain Dogs

After months of negotiations and revisions, Greenville County Council members voted unanimously Tuesday on an ordinance that allows tethering but enacts restrictions that assure a dog has more space to move about and isn't injured by the tether.
Author: Anna B. Mitchell (The Greenville News)
Published: 12:54 PM EDT October 3, 2018
Updated: 1:41 PM EDT October 3, 2018

Greenville, SC (Greenville News) -Chains around a dog's neck are no more in Greenville County.

After months of negotiations and revisions, Greenville County Council members voted unanimously Tuesday on an ordinance that allows tethering but enacts restrictions that assure a dog has more space to move about and isn't injured by the tether.

In an emotional address to the council, dog advocate Barbra Anderson-Richardson described a dog named Gus who was adopted from a local shelter and tied to a short metal chain with little access to food, water or shelter. Volunteers, she said, found him "starved nearly to death, his collar embedded in his neck with a neck wound infected with maggots."

"After all that, Gus didn't make it," she said.

The new county ordinance requires tethers be attached to a leather or nylon collar or body harness on the dog "properly fitted so as to not cause injury" or "embed in the dog’s neck." The dogs must have at least 50 square feet to roam and a linear distance of 20 feet if they are tied to a line on a trolley.

Also, tethering is banned outright for any puppy younger than three months old.

"I feel like we're going in the right direction. The fight is not over," said Amber Fuller, a dog advocate who traveled to Greenville from Columbia to express her support for the county's stricter rules on tethering. "Tethering holds no place in civilized society."

She said she would prefer an ordinance that requires dogs be placed behind fences and not tied to trees.

The new ordinance is not as strict as the one in the cities of Greenville and Spartanburg, where dogs can be on a tether no longer than two hours and only with owners present.

But, Richardson said, "the county can't go from zero to 60 with one ordinance."

Previously, county law restricted choke collars, leashes shorter than 12 feet and tethers too heavy to let a dog move about freely. The new ordinance gives the dog more space to move and steps up the proper fit of collars.

Greenville County Council on Tuesday voted to approve a new ordinance that places restrictions on the tethering of dogs.

Greenville County Council on Tuesday voted to approve a new ordinance that places restrictions on the tethering of dogs. (Photo: Getty Images/iStockphoto)

The new county ordinance also allows tethering in parks and during "lawful hunting activities." At people's homes, dogs can be tethered to a running line, pulley or trolley system that is elevated up to seven feet off the ground."

"If we are going to permit tethering in Greenville County, potentially for a dog's entire life, at the very least we have an obligation to require owners to tether safely and humanely," Richardson said.

More than 50 supporters — most wearing red shirts — attended the council meeting to show their support for the tethering restrictions. Many of those attending were part of the movement earlier this year to require dog owners to provide adequate shelter for their pets.

County Councilwoman Liz Seman led the effort to draft both of the dog ordinances this year, with support from fellow councilman Rick Roberts.

"This is the safe and humane thing for us to do," Seman said.

Roberts offered the amendment, added with unanimous support, to ban tethering for puppies.

"Many people have pushed for an older age," Roberts said, pointing out that young dogs are vulnerable to coyotes and other wild animals when tied to a line. "Three months is a minimum we should consider."

Councilman Bob Taylor went a step further, saying that tethering of any kind ought to be re-examined.

"Having dogs tethered like this on a chain or a run or a rotary thing still makes them susceptible to other dogs coming in the yard, so they aren't safe," Taylor said. "If they are tethered, not fenced, children could wander in. Dogs could maul them."

The county picked up the issue this summer after the General Assembly failed to pass statewide restrictions on tethering this past spring. The state Senate unanimously approved an animal cruelty and care bill in February, but the bill died in the House without being brought to a vote.