USC president-elect 'Bob' Caslen addresses his selection, challenges ahead and vision for University 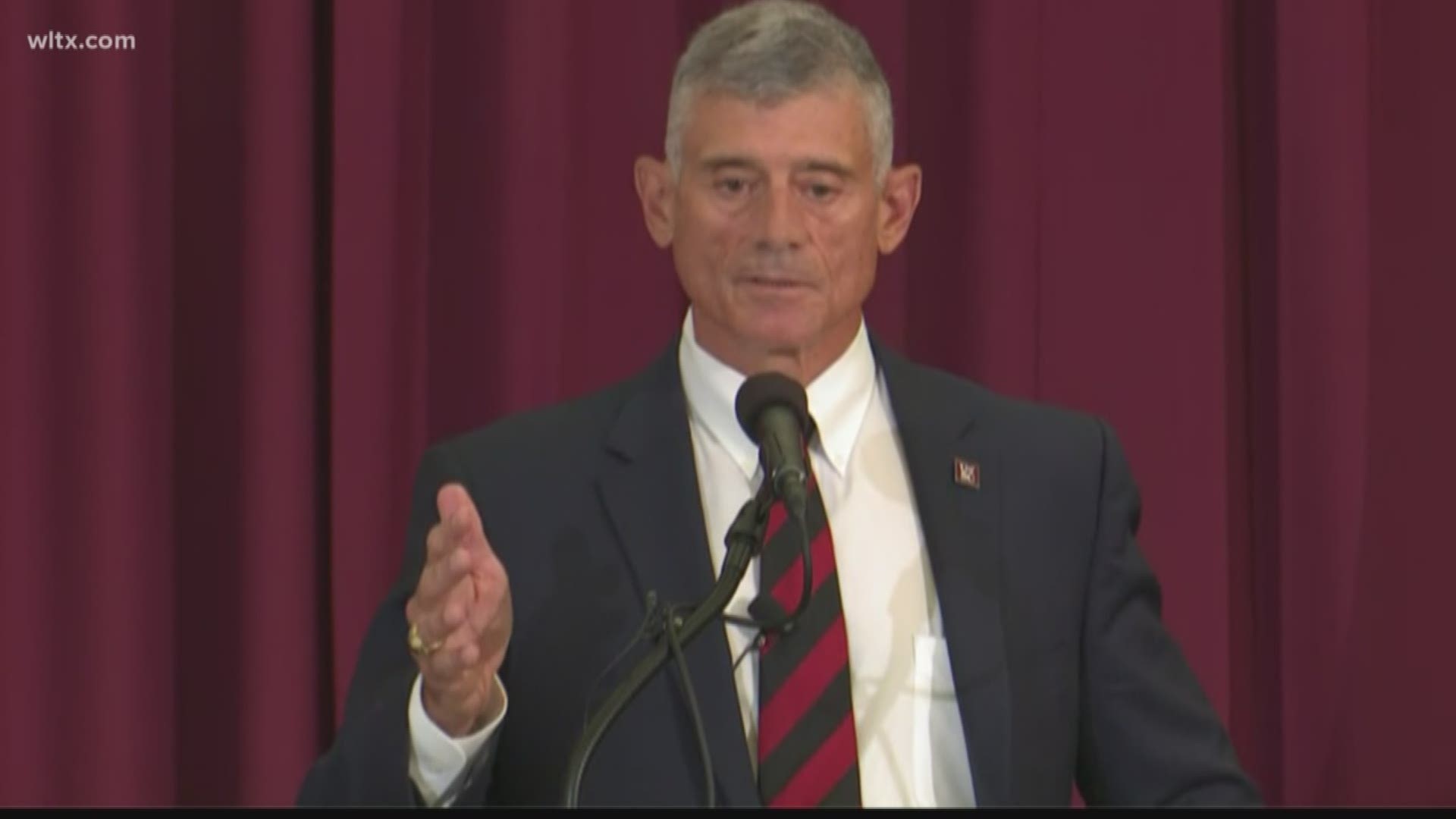 COLUMBIA, S.C. — Retired Army General Robert Caslen was at the University of South Carolina's Columbia campus Monday to participate in a series of meetings with students, faculty and staff.

In a news conference in between meetings, Caslen spoke with the media about his selection, challenges ahead and his vision for the University. 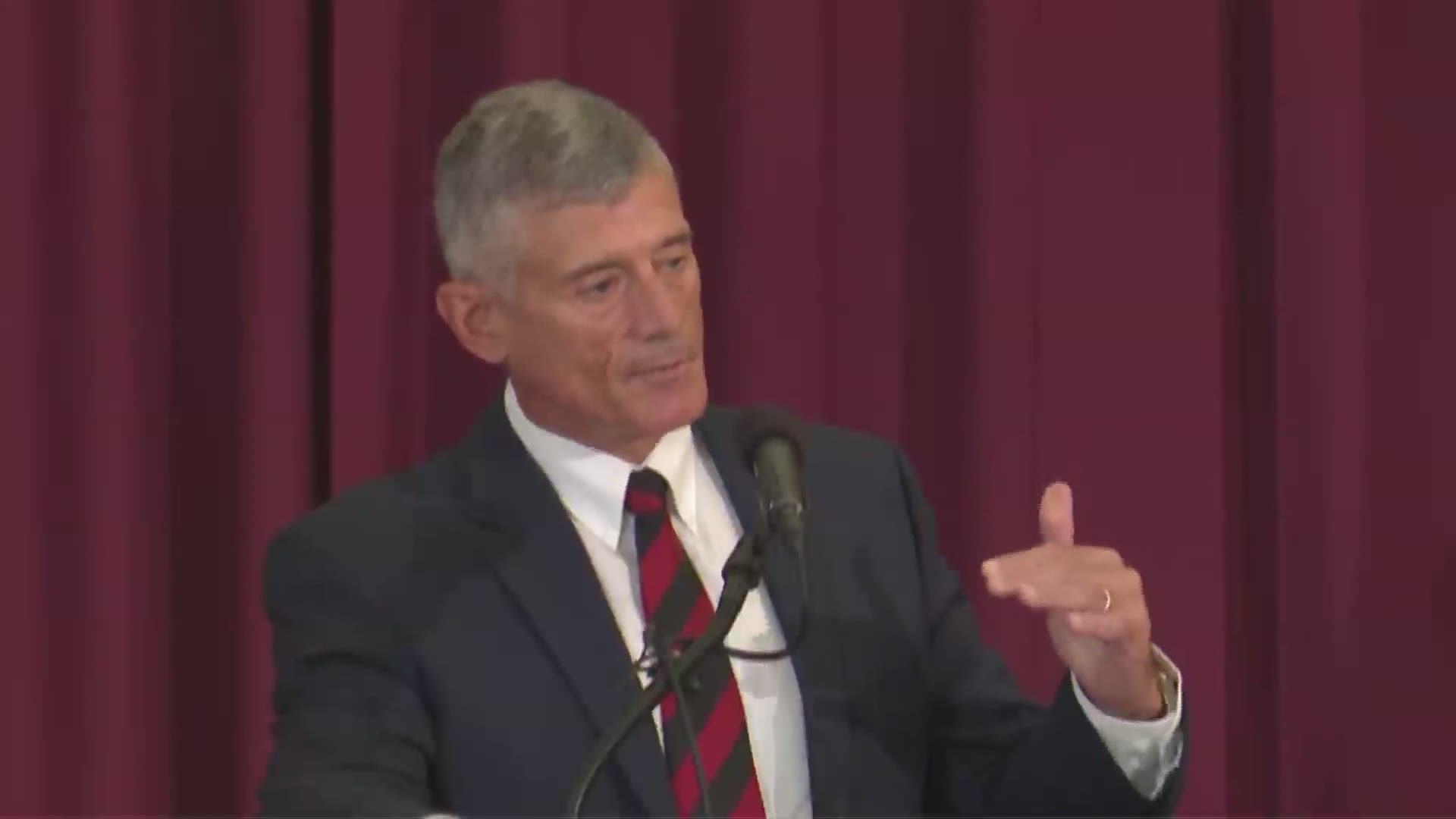 Caslen spoke at length during Monday's press conference about addressing his controversial selection to lead the University. The General, now asking people to refer to him as 'Bob,' said he was already making connections with students and faculty.

"First thing this morning, that I felt was extremely important, was to sit down with a cross-section of students. They were incredible, it's why we're here, is to serve our students. I got some great feedback from them about some of the student activities that are coming up. They gave me great advice on the visibility of a president. They talked to me about diversity and why diversity is so important. We reflected about my comments back in April and had a good discussion about that," Caslen said.

He continued to say they talked about sustainability and mental health needs of the student body. Caslen said he would continue to meet with students, faculty, staff, and contributors in the coming weeks and months.

The President-elect also clarified comments he made in April about sexual assault that caused controversy with his potential election.

“I never intended to shift the responsibility of sexual assault onto the shoulders of victims,” Caslen said about those April comments. “I want to apologize to those who thought I was blaming victims.”

In the nearly one hour press conference, Caslen said academic excellence, more research dollars and opportunities, and increased diversity would be his three main areas of focus moving forward.

When asked how he would try to heal rifts among the student body, faculty and alumni about his selection, Caslen said he would go to them.

"Management by wandering around means you don't sit in your office and sit behind your computer. Management by wandering around is that you make yourself present and that you are visible and that you engage. As I told the students this morning, you know what a student will tell me on my turf on my time is something that a student will never tell me on their turf on their time. But, what I'm really interested in as a leader is what are the issues that a student is experiencing on their turf? So, the only way that I'm going to get that really honest, candid feedback is to be out there with them. To see what they're doing, see some of the experiences they are. To go to their meetings, where they discuss some of these issues," Caslen remarked.

RELATED: 'I’m not a fan of him': USC students weigh in on new president's first steps

The new President said he had already accepted invites to a community welcome, 'hip-hop night,' and an African American cookout event.

In other parts of the press conference, Caslen highlighted his work at West Point to increase diversity, as well as his role on an NCAA committee tackling sexual assault and violence.

He also did not fail to take a shot at the Gamecocks' bitter rival, Clemson.

"Beat Clemson," Caslen said after the meeting, when asked if he had a message for his fellow state university.

Earlier in the press conference, he said he would offer an ice cream sundae social at the president's home to any team, whether it be football, chess, debate, etc., that beat Clemson during his tenure.

After the press conference, USC Board of Trustees Chairman John von Lehe Jr. gave a few thoughts on Caslen's election.

The Chairman added he was pleased Caslen said he would focus on moving forward together with the Board of Trustees as a team starting this fall.

Monday's news conference came three days after the selection of Robert Caslen to lead the the University of South Carolina as its next president following two weeks of after nearly two weeks of controversy that highlighted deep divides in the leadership of the school, including students and faculty, alumni and the state’s political leaders.

The trustees selected Caslen, a former three-star Army general, in a vote on Friday, just after 1:30 p.m. The final tally was 11 for, 8 against, and 1 trustee voting present. The trustees had met in a closed-door executive session for over two hours before coming out to hold the vote in public.

"I am honored to be chosen to lead this great institution," he said in a statement. "I fully recognize the challenges the Board addressed to get to this point, and I am grateful for their support and confidence. I will work tirelessly to listen to all of our students, faculty, staff, Board members, and all our constituents to understand their concerns and issues, and I will actively seek their advice.

RELATED: Reaction from UofSC Board of Trustees decision

Outgoing University of South Carolina president Harris Pastides responded to the selection of Robert Caslen as the school's 29th president on Sunday.

In a statement posted to the University's Facebook page on Sunday morning, Pastides acknowledged controversy surrounding the selection and urged a path of reconciliation.

"Today begins the next meaningful chapter in the history of our beloved University." the statement reads. "There is no doubt that the last few months have been difficult and have strained relations within our Carolina family," the statement continues. "I know we will show the world the strength of the ties that bind us together. Let's pledge to work together to begin the healing and reconciliation as we seek to move our great University forward."

In full, the statement read:

Today begins the next meaningful chapter in the history of our beloved University. I know Bob Caslen well from national committee work at the NCAA, and I have talked with him and offered him my congratulations. Patricia and I look forward to welcoming Bob and his wife, Shelly, to the Carolina community.

There is no doubt that the last few months have been difficult and have strained relations within our Carolina family. From time to time, that happens in every family, and I know we will show the world the strength of the ties that bind us together. Let's pledge to work together to begin the healing and reconciliation as we seek to move our great University forward.