'We're going to make sure it stays': Camp for Oregonians with disabilities mostly destroyed in Beachie Creek Fire

That a few buildings were spared gives Upward Bound Camp Exec. Dir. Diane Turnbull hope; she believes it needs to be here to continue serving those who need it most. 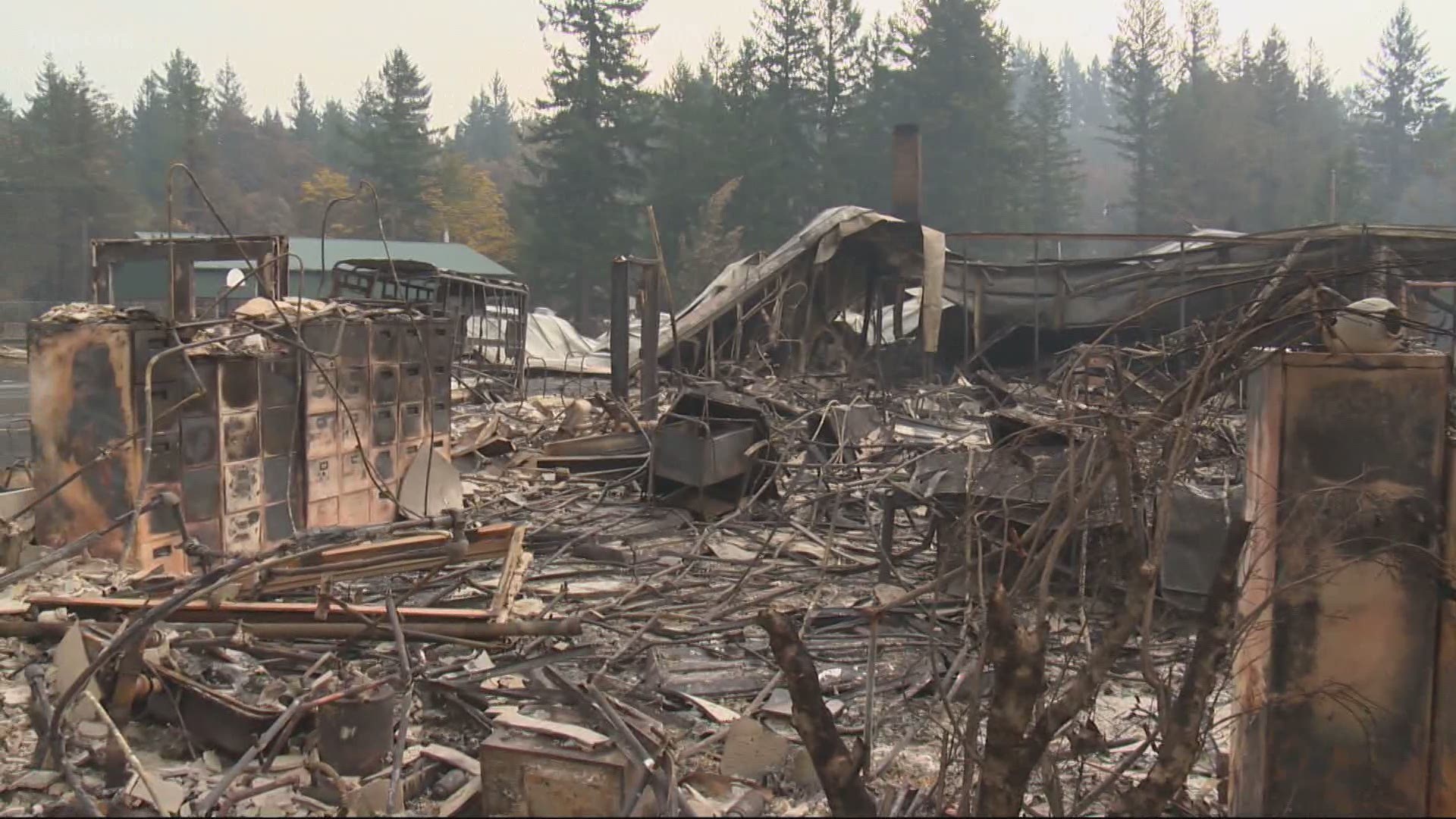 GATES, Ore. — The Beachie Creek Fire tore through a special place that serves Oregonians with disabilities. But in the face of destruction, the Upward Bound Camp family is focused on building hope and a new beginning.

For a century, Gates Elementary School has held the town's history. Upward Bound Camp, a faith-based organization that puts on camps for adults with disabilities, took it over a few years ago.

"We just repurposed it the best way we could," Upward Bound Executive Director Diane Turnbull said. "[It’s] just gone like that."

Some of their campers live with family, others live in group homes.

"They need stability and camp is that to some of them," Turnbull said. "They were already having such a hard time with the pandemic and having to stay home and not understanding and not being able to come to camp."

Lanora Dienstel’s daughters Catherine, 24, and Taryn, 26, always looked forward to escaping to camp, a place that gave them so much independence. Upward Bound has essentially been like a second home for the whole family the past two years.

"Being able to spend time away from family by themselves where people are totally and completely accepting of them for who they are, not what they do or don’t do," Dienstel said.

She hasn’t told the girls the news yet; Catherine had a hard-enough time evacuating their home down the road in Mill City.

"The fact that our home survived gave them both relief," Dienstel said. "She's going to be devastated."

As Turnbull took in the damage on Friday, long-time staff and board members stopped by to see for themselves since the road up to Gates had been reopened and evacuation levels were lowered.

The Beachie Creek Fire destroyed nearly everything on the property, including their gym and the main program building. The metal doors to the camp's main building and stacks of filing cabinets stand, but are surrounded by piles of destruction.

"We went in and out of those doors every day, hundreds of times back and forth with campers. And now they’re doors to debris," Turnbull said. "You can see all the filing cabinets — that’s our history right there on paper."

Most of Upward Bound Camp at Gates Elementary was destroyed in the Beachie Creek Fire, but a few buildings still stand....

Inside that building campers would sew, do arts and crafts and play games. The chapel and administrative offices were inside, as were the camp’s bunkhouses. Now all that's left of the bunks are twisted and melted metal bed frames and stray coils.

While so much was lost, the old school building from 1927, which houses the camp kitchen, still stands. Scorched dirt and shrubs show how close fire got to the building. Turnbull said the fact it survived symbolizes a chance for rebirth with the old building now serving as an anchor.

Turnbull’s house on the property was also untouched, though flames spread around it. Flames also surrounded the nature pavilion on the property but ultimately left it alone.

"It gives us hope. And that he was watching out for us," Dienstel said.

Incident command on the Beachie Creek Fire had initially set up the fire incident command post on the property in Gates before they, too, were forced to evacuate when conditions got too dangerous.

They were able to fight fire on the property and protect structures for a period of time. Firefighters' trailers, tables and other belongings were torched once the fire ripped through the property.

"I've been saying it's a combination of divine intervention and really great firefighting by people here who have a heart for this place," Turnbull added.

That a few buildings were spared gives Turnbull hope; she believes the camp needs to be here to continue serving those who need it most.

The old school buildings were not great or very conducive to begin with. Turnbull sees this as a chance to make it their own and have a fresh start; in the face of so much destruction and devastation she and the Upward Bound family see an opportunity to make the camp even better.

"We were making do with the buildings that we had. Now we get to make the buildings we can do with and that are appropriate and accessible to our campers," Dienstel said.

"That’s what I want the campers to know, is that you are coming back! And I’ve committed to them that by next summer we’ll have something," Turnbull added. "It needs to be here and we’re going to make sure it stays."