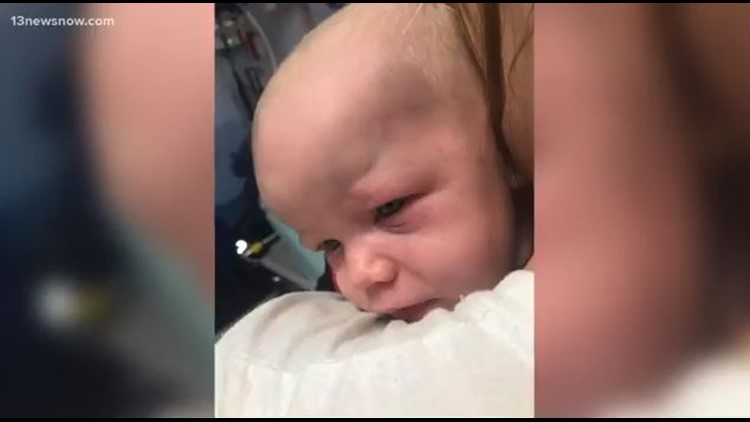 Military parents: 5-month-old gets a black eye from babysitter

NORFOLK Va. (WVEC) — A baby was bruised and taken to the hospital after an incident at the babysitters.

Breauna and Zachary Palmers said they moved to Norfolk from Illinois, for the Navy. On Wednesday, Zachary was working at his ship and Beauna was at work too. The couple took their 5-month old, Harper, to a babysitter's home.

According to the Palmers, the sitter was a military wife who lives on the same street in military housing on Royal Windsor Loop.

The sitter has watched Haper for the past three months, but on Wednesday things changed. Breauna got a Facebook message that said she needed to come pick up her child.

When Breauna got to the sitter's house, she saw her 5-month old daughter with a black eye and a swollen face.

Harper was taken to CHKD, and luckily, she had no broken bones.

On Thursday, the Palmers went to a Child Abuse Program clinic in Norfolk to make sure there are no other signs of abuse. Due to the extent of Harper's injuries, Child Protective Services reached out to Norfolk Police.

The Norfolk Police Department has its Special Crimes Unit detectives investigating the incident. According to Harper's parents, NCIS might become part of this investigation because of the military affiliations in this case.

This Navy couple must now move forward and go back to work, but this time they're only going to use a military daycare.

"There will be no more babysitters,” said Breauna.

► Make it easy to keep up to date with more stories like this. Download the 13News Now App.