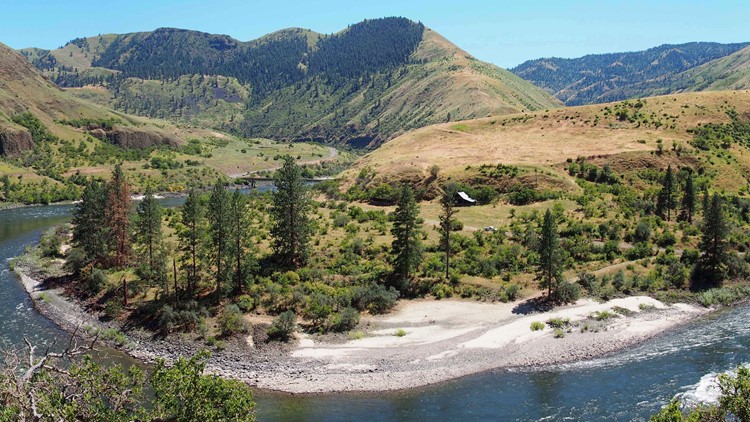 Photo by: AP
This undated photo provided by Loren Davis in August 2019 shows an overview of the Cooper's Ferry canyon in western Idaho. In a report released on Thursday, Aug. 29, 2019, scientists say they’ve found artifacts in the area that indicate people were living here around 16,000 years ago, providing new evidence that the first Americans entered their new home by following the Pacific Coast. (Loren Davis via AP)

NEW YORK — Scientists say they've found artifacts in Idaho that indicate people were living there around 16,000 years ago, providing new evidence that the first Americans entered their new home by following the Pacific coast.

The discovery also points to Japan as a possible origin or influence for the migration, said study leader Loren Davis of Oregon State University.

Other experts were split on what the findings mean and how old they are, not an unusual reaction in the contentious topic of early humans in the New World.

Davis and colleagues reported Thursday in the journal Science on their excavation of the Cooper's Ferry site in western Idaho.

RELATED: Idaho Life: An illuminating look at the past

In the oldest part of the site, they found 43 flakes that had evidently been chipped off of stones in the process of making tools like those found in younger areas of the site. They also found four such flakes that had been modified to be used for a task like cutting or scraping, and pieces of bone that indicate discarded food, Davis said.

The site is between 15,280 and 16,560 years old, for an approximate age of 16,000 years, analysis indicated. It was occupied repeatedly over time, researchers said.

What does it all mean? For one thing, the researchers said, the calculated age argues for one side of a debate about just how the first Americans arrived.

RELATED: WATCH | 1619: The First Africans in Virginia and the Making of America

The traditional narrative is that the peopling of the Americas began after a migration crossed a now-submerged land bridge called Beringia that used to extend from Siberia to Alaska. The migration's progress south from there was blocked for a while by massive ice sheets in Canada, but eventually a gap in the ice opened and people moved through this so-called "ice-free corridor."

But in recent years, as scientists have found earlier and earlier signs of humans living in the Americas, some have argued that people had shown up before that corridor appeared. So maybe they traveled the Pacific instead, either on foot or by boat, or both.

Davis said his paper indicates people were living in Idaho long before the corridor opened, citing others' research that says it was open by about 14,800 years ago. The best explanation, he said, is that "they came down the coast and took a left-hand turn south of the ice, and went up the Columbia River Basin."

The site also revealed a style of stone projectile point that resembles artifacts of similar age on the Japanese island of Hokkaido. So that supports the idea that the migration that led to the first Americans may have begun in that area, when Hokkaido was part of a larger land mass, Davis said. Or it could have started somewhere else in northeast Asia, but still reflect a cultural contribution of the Hokkaido area, he said.

A migration from the Hokkaido area could have skirted the southern coast of Beringea before heading south along the Pacific, he said.

Experts familiar with the work gave differing opinions on the site's age, reflecting the difficulty of interpreting data for assigning ages to artifacts. A site in Texas has also been dated to about 16,000 years, but Davis said the technique used for Cooper's Ferry is more precise.

Dennis Jenkins, senior research archaeologist at the University of Oregon's Museum of Natural and Cultural History, said the Idaho site appears to go back 16,000 years. He also said the paper provides "a major advance" by linking early Americans to Japan more firmly than before.

Michael Waters of the Center for the Study of the First Americans at Texas A&M said he prefers an age of between 14,200 years and 15,000 years ago. That would put it in the time frame of several sites in Texas, Wisconsin and Oregon, he said. As for the Japan connection, "I think they're on to something there."

Ben Potter of the University of Alaska in Fairbanks questioned the reported age of the artifacts. He said the most secure age estimates do not precede the opening of the ice-free corridor, so the new paper doesn't rule out that possible entry point. He also said he was not convinced by the comparison with the Japanese artifacts.

The Associated Press Health and Science Department receives support from the Howard Hughes Medical Institute's Department of Science Education. The AP is solely responsible for all content.