In April 2008, Ronald Shurer braved gunfire in Afghanistan to save wounded comrades from Taliban fighters. 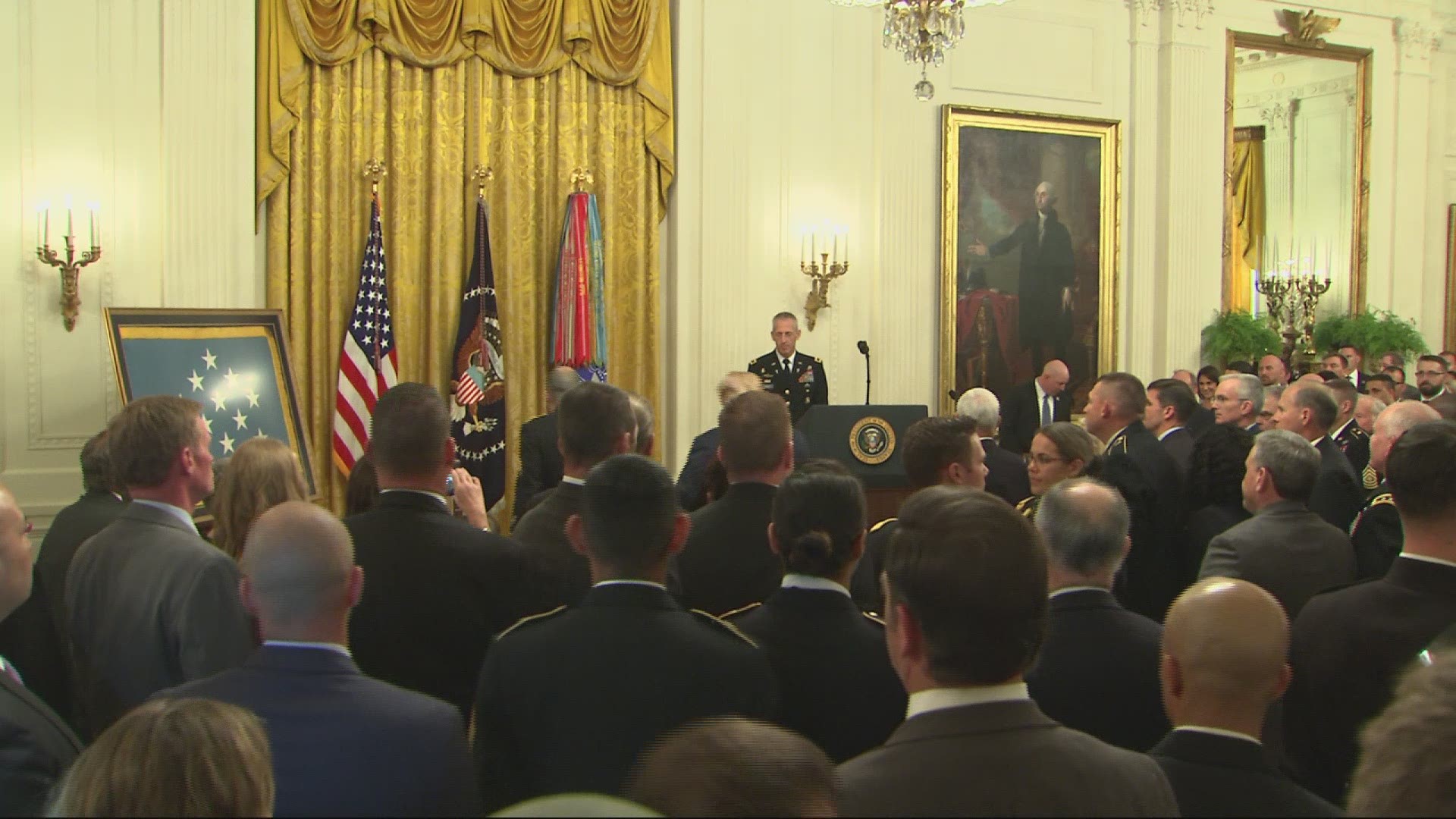 WASHINGTON — Conferring the Medal of Honor on a former Army medic, President Donald Trump praised recipient Ronald Shurer II on Monday as an inspiration who saved lives in Afghanistan, served as a special agent in the Secret Service, and is now battling cancer.

"He's been fighting it every single day," Trump said during a ceremony in the East Room at the White House. "He's a warrior."

In a brief statement after the ceremony, Shurer said he was "incredibly honored and humbled" by the Medal of Honor, and he paid tribute to his comrades in battle.

Credit: Alex Wong/Getty Images
U.S. President Donald Trump (R) shakes hands with Ronald J. Shurer II (L) after he awarded him with the Medal of Honor during an East Room ceremony at the White House October 1, 2018 in Washington, DC.

While a Special Forces combat medic a decade ago, Shurer braved gunfire in Afghanistan to save wounded comrades who were pinned down by Taliban fighters.

In April 2008, in Afghanistan's Skok Valley, Shurer and his team of commandos were ambushed by an enemy force of more than 200 militants with snipers, machine guns and rocket-propelled grenades.

A senior medical sergeant, Shurer sprinted through enemy fire to treat one downed soldier, then dodged more bullets to catch up with members of his unit closest to the fighting. He fought for more than an hour to reach the group, killing several insurgents along the way, according to his commendation for the Silver Star.

Once there, he treated four more critically wounded soldiers and moved through gunfire to treat others. Shurer managed to evacuate the wounded soldiers down a near-vertical 60-foot cliff under fire while shielding them from falling debris, the commendation states.

"Blood all over the place," Trump said in describing the scene.

Shurer loaded the wounded soldiers onto a helicopter, took command of his squad and headed back to the fight. His actions saved the lives of his teammates, Trump said.

"For more than six hours, Ron bravely faced down the enemy," the president said. "Not a single American died in that brutal battle, thanks in great measure to Ron's heroic actions."

He was honorably discharged in 2009, joined the Secret Service’s Counter Assault Team and was assigned to its Special Operations Division in 2014. He lives in Burke, Virginia, with his wife, Miranda, and sons Cameron, 10, and Tyler, 7, all of whom attended the White House ceremony.

"We stand in awe of your father's courage," Trump told Shurer's children. "I wish I was that popular."

While praising Shurer's battle against cancer, Trump also lauded Shurer's work as a special agent in the Secret Service.

"Ron works here," Trump said, "right alongside of us."

Shurer had already received a Silver Star for his actions in Afghanistan.

In 2014, then-Defense Secretary Chuck Hagel ordered a review of citations for valor since the Sept. 11, 2001, terror attacks. That examination resulted in the upgrade of several medals, including the most recently awarded Medal of Honor.

Hagel's review sprung from concern that the standards for conferring awards for valor had been overly stringent at the outset of the wars in Afghanistan and Iraq.

In August, Trump made the award posthumously to Air Force Tech Sgt. John Chapman for his heroic fight in the mountains of Afghanistan in 2002. Chapman was the first airman to be awarded the Medal of Honor since the Vietnam War.