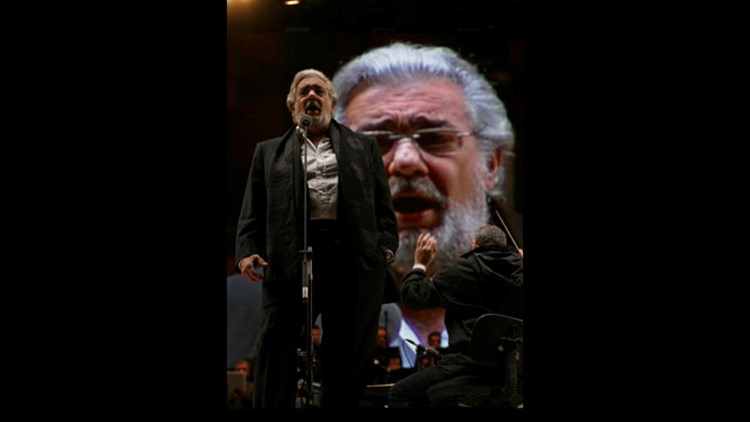 Photo by: WFAA
Spain's tenor Placido Domingo performs during a sound check prior to a free concert in Mexico City, Saturday, Dec. 19, 2009. Domingo, who formed part of the Three Tenors with the late Luciano Pavarotti and Jose Carreras, performed in more than 120 different opera roles. (AP Photo/Marco Ugarte)

Placido Domingo is disputing allegations of sexual harassment against him, saying he has always behaved like a gentleman but that "gallant gestures are viewed differently nowadays."

The 78-year-old Spanish opera legend told the Spanish online newspaper El Confidencial in an interview published Friday that he feels strong despite the accusations, which he called a "nightmare." He said he intends to continue performing at least until the end of his planned engagements running through 2021.

The Associated Press reported in August and September that more than 20 women who worked with Domingo in the opera world accuse him of sexual harassment or inappropriate, sexually charged behavior, including unwanted touching and sudden attempts to kiss them, and of sometimes damaging their careers if they rejected him.

In statements responding to the AP's reporting, Domingo said the allegations were "in many ways, simply incorrect." Domingo said at the time he believed his "interactions and relationships were always welcomed and consensual," though he noted that "rules and standards" have changed.

In El Confidencial interview, Domingo again stopped short of flatly denying what the women allege, but insisted he had never behaved improperly.

He said Spaniards are naturally "warm, affectionate and loving."

"I have been gallant, but always within the limits of gentlemanliness, respect and sensitivity," he was quoted as saying.

He insisted he "never behaved in the aggressive, stalking and vulgar manner that (the accusers) described."

U.S. opera houses canceled Domingo's upcoming performances following the accusations. Domingo resigned from the Los Angeles Opera, where he had been general director since 2003. The L.A. Opera is conducting an investigation into his alleged behavior.

Domingo said he felt he has been unfairly treated.

He said that the "credibility given to the accusations is automatic ... And I've felt prematurely judged, sentenced and convicted," though he has not been charged with a crime.

In this Feb. 27, 1984, file photo, singer Placido Domingo laughs with members of the Rockettes at New York's Radio City Music Hall. The singer and dancers met while rehearsing for Channel Thirteen's "Gala of Stars 1984." Nine women in the opera world have told The Associated Press that they were sexually harassed by Domingo, one of the most celebrated and powerful men in opera. The women say the encounters took place over three decades, at venues that included opera companies where he held top managerial positions. (AP Photo/Steve Friedman, File)
Associated Press

He said he had never abused his position of power. "I never promised a role in return for favors," he said.

Domingo said he had been through "the most difficult months of my life."

"Everything happened so quickly," he said. "I was able to sit back and reflect on it all only a few weeks ago."

The interview was published just days before Domingo is due to star in Giuseppe Verdi's "Nabucco" at Valencia's Palau de les Arts, starting Monday.

The sexual harassment allegations against Domingo have rocked the opera world in the United States, where he no longer has any appearances scheduled. But European theaters have stood behind him, maintaining all his scheduled dates.

Domingo told El Confidencial he has drawn strength from the support of European theaters and fans, and from family and friends who have stood by him.

"They have been difficult times but things have died down a bit. I'm keeping on working, studying, rehearsing and performing. That has provided me with the calm I need to face this nightmare," he said.

"I still feel strong and healthy."