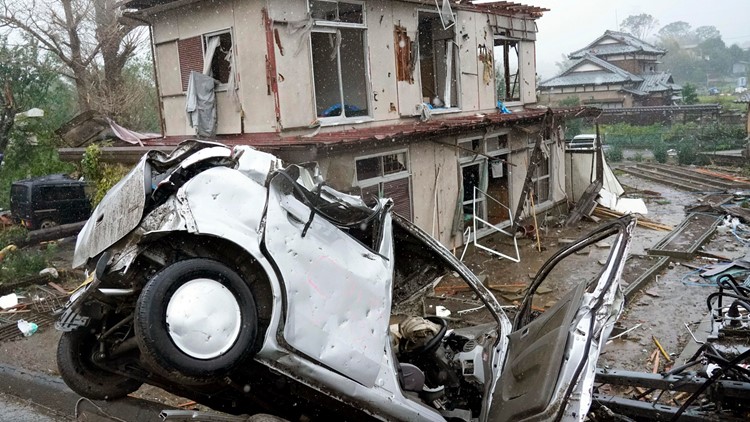 Photo by: AP
Destroyed house and vehicle are seen following a strong wind in Ichihara, Chiba, near Tokyo Saturday, Oct. 12, 2019.

A heavy downpour and strong winds pounded Tokyo and surrounding areas on Saturday as a powerful typhoon forecast to be Japan's worst in six decades made landfall and passed over the capital, where streets, nearby beaches and train stations were long deserted.

Store shelves were bare after people stocked up on water and food ahead of Typhoon Hagibis. The Japan Meteorological Agency warned of dangerously heavy rainfall in Tokyo and surrounding prefectures, including Gunma, Saitama and Kanagawa, and later expanded the area to include Fukushima and Miyagi to the north. A coastal earthquake also rattled the area.

"Be ready for rainfall of the kind that you have never experienced," said meteorological agency official Yasushi Kajihara, adding that areas usually safe from disasters may prove vulnerable.

"Take all measures necessary to save your life," he said.

Kajihara said people who live near rivers should take shelter on the second floor or higher of any sturdy building if an officially designated evacuation center wasn't easily accessible.

Hagibis, which means "speed" in Filipino, was advancing north-northwestward with maximum sustained winds of 144 kilometers (90 miles) per hour, according to the meteorological agency. It was traveling northward at a speed of 40 kph (25 mph).

It reached Kawasaki, a western part of greater Tokyo, late Saturday and headed to Tsukuba city to the north about an hour later, before it was expected to swerve toward the sea, the agency said.

The storm brought heavy rainfall in wide areas of Japan all day ahead of its landfall, including in Shizuoka and Mie prefectures, southwest of Tokyo, as well as Chiba to the north, which saw power outages and damaged homes in a typhoon last month.

The heavy rain caused rivers to swell, and several had flooded by late Saturday. The wind flipped anchored boats and whipped up sea waters in a dangerous surge along the coast and areas near rivers, flooding some residential neighborhoods and leaving people to wade in ankle-deep waters and cars floating. Some roads were so flooded they looked like muddy ditches.

An earthquake shook the area drenched by the rainfall shortly before the typhoon made landfall in Shizuoka prefecture Saturday evening. but there were no immediate reports of damage. The U.S. Geological Survey said the magnitude 5.3 quake was centered in the ocean off the coast of Chiba, near Tokyo, and was fairly deep, at 59.5 kilometers (37 miles). Deep quakes tend to cause less damage than shallow ones.

In Shizuoka, one of two men who went missing in the Nishikawa River was rescued, Gotemba city official Fumihiko Katsumata said. Firefighters said the two men were working at a river canal to try to control overflowing when they were swept away.

More than 370,000 homes suffered power outages as a result of the typhoon, according to Tokyo Electric Power Co.

Yusuke Ikegaya, a Shizuoka resident who evacuated ahead of the storm, said he was surprised that the nearby river was about to overflow in the morning, hours before the typhoon made landfall.

"In the 28 years of my life, this is the first time I've had to evacuate even before a typhoon has landed," he said.

Two dams began to release some of their waters and other dams in the area may take similar measures, as waters were nearing limits, public broadcaster NHK reported. An overflooded dam is likely to cause greater damage, and so releasing some water gradually is a standard emergency measure, but the released water added to the heavy rainfall could be dangerous, causing rivers to flood.

RELATED: Super typhoon bears down on Japan with strength of Category 5 hurricane

RELATED: What happens underwater during a hurricane?

Rugby World Cup matches, concerts and other events in the typhoon's path were canceled, while flights were grounded and train services halted. Authorities acted quickly, with warnings issued earlier in the week, including urging people to stay indoors.

Some 17,000 police and military troops were called up, standing ready for rescue operations.

Residents taped up their apartment windows to prevent them from shattering. TV talks shows showed footage of household items like a slipper bashing through glass when hurled by winds.

Evacuation centers were set up in coastal towns, and people rested on gymnasium floors, saying they hoped their homes were still there after the storm passed.

The typhoon disrupted a three-day weekend in Japan that includes Sports Day on Monday. Qualifying for a Formula One auto race in Suzuka was pushed to Sunday. The Defense Ministry cut a three-day annual navy review to a single day on Monday.

All Nippon Airways and Japan Airlines grounded most domestic and international flights at the Tokyo, Osaka and Nagoya airports, and some Sunday flights have also been canceled.

A typhoon that hit the Tokyo region in 1958 left more than 1,200 people dead and half a million houses flooded.