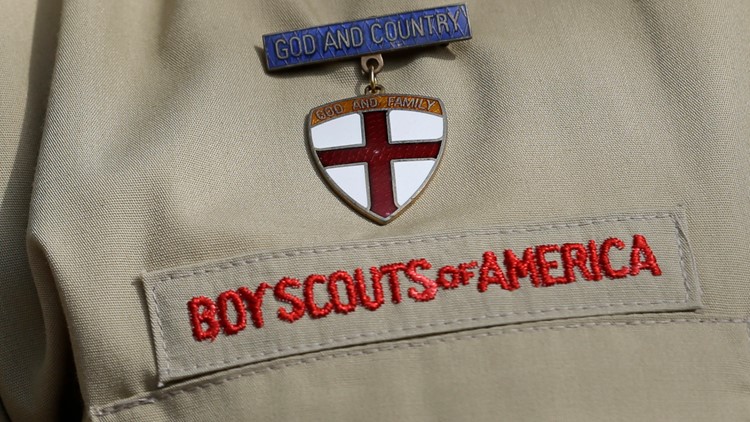 Photo by: AP
FILE - In this Feb. 4, 2013 file photo, shows a close up detail of a Boy Scout uniform worn during a news conference in front of the Boy Scouts of America headquarters in Irving, Texas. The Boy Scouts of America says it is exploring "all options" to address serious financial challenges, but is declining to confirm or deny a report that it may seek bankruptcy protection in the face of declining membership and sex-abuse litigation. "I want to assure you that our daily mission will continue and that there are no imminent actions or immediate decisions expected," Chief Scout Executive Mike Surbaugh said in a statement issued Wednesday, Dec. 12, 2018. (AP Photo/Tony Gutierrez, File)

Files maintained by the Boy Scouts of America contain the names of more than 7,800 people suspected of child sex abuse dating back to the 1940's, an attorney for victims said Tuesday.

The law firms of Greg Gianforcaro and Jeff Anderson & Associates also revealed on Tuesday the names of more than 130 Boy Scout Leaders from New York and another 50 from New Jersey who have been accused of sexual abuse.

The Boy Scout leaders were identified in the Boy Scouts of America so-called "Perversion Files" as having allegations of sexually abusing minors.

During a Tuesday morning press conference, attorney Jeff Anderson also said testimony from a January trial in Minnesota revealed there were 7,819 alleged abusers named in the Boy Scouts files and more than 12,000 victims between 1944 and 2016.

Anderson said it was an expert hired by the Boy Scouts to audit the organization's files that ultimately revealed during trial testimony the number of cases and victims.

The attorneys also demanded that the Boy Scouts of America release the identities and background info on all members of the BSA who have been accused of sexual misconduct.

“The alarming thing about this is not just the number but the fact is that the Boy Scouts of America has never actually released these names in any form that can be known to the public,” he said.

In 2012, files covering 1959 to 1985 were made public in 2012, after they were shown in a civil suit and the Oregon Supreme Court ruled the files should be released, according to reports at the time.

BSA told NBC New York that "care deeply about all victims of child sex abuse and sincerely apologize to anyone who was harmed during their time in Scouting.”

"We believe victims, we support them, and we have paid for unlimited counseling by a provider of their choice. Nothing is more important than the safety and protection of children in Scouting and we are outraged that there have been times when individuals took advantage of our programs to abuse innocent children. At no time have we ever knowingly allowed a sexual predator to work with youth, and we mandate that all leaders, volunteers and staff members nationwide immediately report any abuse allegation to law enforcement," the statement read.