Trump digs in against Dem congresswomen; they're firing back 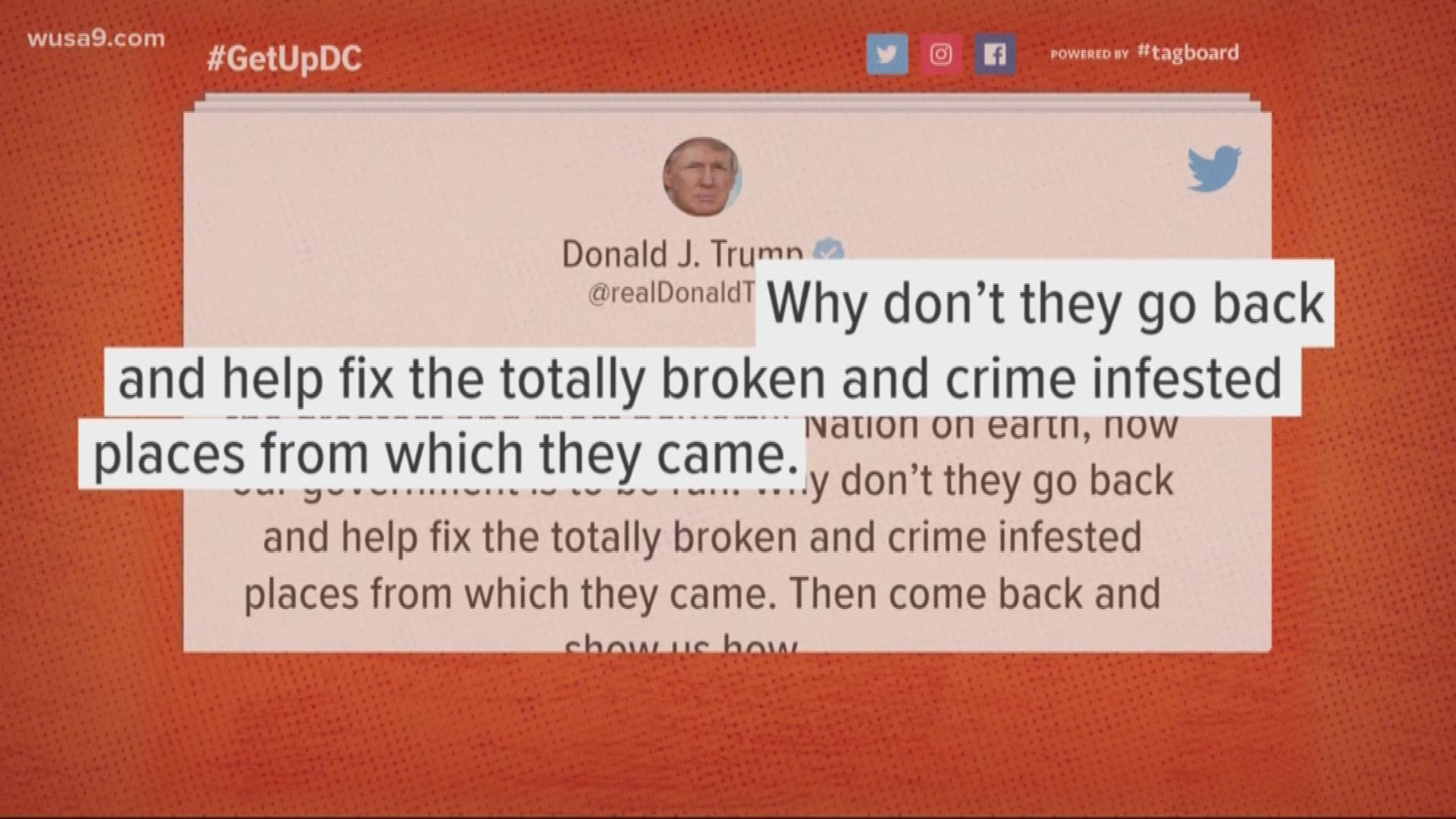 WASHINGTON — Defiant in the face of widespread criticism, President Donald Trump renewed his belligerent call on Monday for four Democratic congresswomen of color to get out of the U.S. "right now," cementing his position as the most willing U.S. leader in generations to stoke the discord that helped send him to the White House.

Content to gamble that a sizeable chunk of the electorate embraces his tweets that have been widely denounced as racist, the president made clear that he has no qualms about exploiting racial divisions once again.

"It doesn't concern me because many people agree with me," Trump said at the White House. "A lot of people love it, by the way."

The episode served notice that Trump is willing to again rely on incendiary rhetoric on issues of race and immigration to preserve his political base in the leadup to the 2020 election.

There was near unanimous condemnation from Democrats for Trump's comments and a rumble of discontent from a subset of Republicans — but notably not from the party's congressional leaders.

Republican Sen. Mitt Romney of Utah, the GOP White House nominee in 2012 and now one of the president's most vocal GOP critics, said Trump's comments were "destructive, demeaning, and disunifying."

Far from backing down, Trump on Monday dug in on comments he had initially made a day earlier on Twitter that if lawmakers "hate our country," they can go back to their "broken and crime-infested" countries. His remarks were directed at four congresswomen: Reps. Ilhan Omar of Minnesota, Alexandria Ocasio-Cortez of New York, Ayanna Pressley of Massachusetts and Rashida Tlaib of Michigan. All are American citizens and three of the four were born in the U.S.

The president's words, which evoked the trope of telling black people to go back to Africa, may have been partly meant to widen the divides within the House Democratic caucus, which has been riven by internal debate over how best to oppose his policies. And while Trump's attacks brought Democrats together in defense of their colleagues, his allies noted he was also having some success in making the controversial progressive lawmakers the face of their party.

The president questioned whether Democrats should "want to wrap" themselves around this group of four people as he recited a list of the quartet's most controversial statements.

The four themselves fired back late Monday, condemning what they called "xenophobic bigoted remarks" from the president and renewing calls for their party to begin impeachment proceedings.

Credit: AP
From left, Rep. Rashida Tlaib, D-Mich., Rep. llhan Omar, D-Minn., Rep. Alexandria Ocasio-Cortez, D-N.Y., and Rep. Ayanna Pressley, D-Mass., respond to remarks by President Donald Trump after his call for the four Democratic congresswomen to go back to their "broken" countries, during a news conference at the Capitol in Washington, Monday, July 15, 2019. All are American citizens and three of the four were born in the U.S. (AP Photo/J. Scott Applewhite)

Trump "does not know how to defend his policies and so what he does is attack us personally," said Ocasio-Cortez.

House Speaker Nancy Pelosi, who said Trump's campaign slogan truly means he wants to "make America white again," announced Monday that the House would vote on a resolution condemning his new comments. The resolution "strongly condemns President Donald Trump's racist comments" and says they "have legitimized and increased fear and hatred of new Americans and people of color."

The Senate's top Democrat, Chuck Schumer of New York, said his party would also try to force a vote in the GOP-controlled chamber.

Trump, who won the presidency in 2016 in part by energizing disaffected voters with inflammatory racial rhetoric, made clear he has no intention of backing away from that strategy in 2020.

"The Dems were trying to distance themselves from the four 'progressives,' but now they are forced to embrace them," he tweeted Monday afternoon. "That means they are endorsing Socialism, hate of Israel and the USA! Not good for the Democrats!"

Trump has faced few consequences for such attacks in the past. They typically earn him cycles of wall-to-wall media attention. He is wagering that his most steadfast supporters will be energized by the controversy as much, or if not more so, than the opposition.

The president has told aides that he was giving voice what many of his supporters believe — that they are tired of people, including immigrants, disrespecting their country, according to three Republicans close to the White House who were not authorized to speak publicly about private conversations.

Trump on Monday singled out Omar, in particular, accusing her of having "hatred" for Israel, and expressing "love" for "enemies like al-Qaida."

"These are people that, in my opinion, hate our country," he said.

Omar, in an interview, once laughed about how a college professor had spoken of al-Qaida with an intensity she said was not used to describe "America," ''England" or "The Army."

She addressed herself directly to Trump in a tweet, writing, "You are stoking white nationalism (because) you are angry that people like us are serving in Congress and fighting against your hate-filled agenda."

Republicans, for their part, largely trod carefully with their responses.

Republican Sen. Lindsey Graham, a close ally of the president who golfed with him over the weekend, advised him to "aim higher" during an appearance on "Fox and Friends," even as he accused the four Democrats of being "anti-Semitic" and "anti-American."

Marc Short, chief of staff to Vice President Mike Pence, said "I don't think that the president's intent in any way is racist," pointing to Trump's decision to choose Elaine Chao, who was born outside the country, as his transportation secretary.

Chao is one of the few minorities among the largely white and male aides in high-profile roles in Trump's administration. She is the wife of Senate Republican leader Mitch McConnell, who declined comment Monday on Trump's attacks.

The latest provocation came just two days after Trump inserted himself further into a rift between Pelosi and Ocasio-Cortez, offering an unsolicited defense of the Democratic speaker. Pelosi has been seeking to minimize Ocasio-Cortez's influence in the House Democratic caucus in recent days, prompting the freshman lawmaker to accuse Pelosi of trying to marginalize women of color.

Trump told advisers later that he was pleased with his meddling, believing that dividing Democrats would be helpful to him, as would elevating any self-proclaimed socialists as a way to frighten voters to steer clear of their liberal politics, the Republicans said.

Among the few GOP lawmakers commenting Monday, Rep. Pete Olson of Texas said Trump's tweets were "not reflective of the values of the 1,000,000+ people" in his district. "We are proud to be the most diverse Congressional district in America. I urge our President immediately disavow his comments," he wrote.

Several other Republicans went out of their way to say they were not condoning the views of the Democrats, while encouraging Trump to retract his comments.

Maine Sen. Susan Collins, who is up for re-election next year, said Trump's tweet was "way over the line and he should take that down."

Sen. Patrick Toomey of Pennsylvania said of the Democrats, "We should defeat their ideas on the merits, not on the basis of their ancestry."

In an Associated Press-NORC Center for Public Affairs Research poll from February 2017, half of Americans said the mixing of culture and values from around the world is an important part of America's identity as a nation. Fewer — about a third — said the same of a culture established by early European immigrants.

But partisans in that poll were divided over these aspects of America's identity. About two-thirds of Democrats but only about a third of Republicans thought the mixing of world cultures was important to the country's identity. By comparison, nearly half of Republicans but just about a quarter of Democrats saw the culture of early European immigrants as important to the nation.