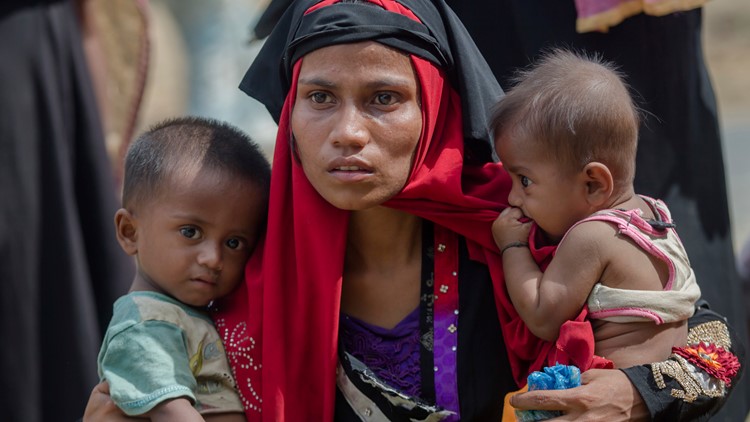 Photo by: AP
FILE - In this Oct. 22, 2017, file photo, Rohingya Muslim woman, Rukaya Begum, who crossed over from Myanmar into Bangladesh, holds her son Mahbubur Rehman, left and her daughter Rehana Bibi, after the government moved them to newly allocated refugee camp areas, near Kutupalong, Bangladesh. A special U.N. body has wrapped up two years of documenting alleged human rights violations by Myanmar's security forces with a call for the Southeast Asian nation be held responsible in international legal forums for genocide against the Muslim Rohingya minority. (AP Photo/Dar Yasin, File)

UNITED NATIONS (AP) — Myanmar wants Rohingya Muslim refugees in Bangladesh repatriated to their former homes so they can live in a "more conducive environment" than the one they fled.

Kyaw Tint Swe is Myanmar's minister for the office of the state counselor. He says Myanmar is working with Bangladesh and the U.N. to find "long-term and practical solutions" to bring home some of the tens of thousands of Rohingya in the country's Rakhine state. That state borders Bangladesh.

Speaking at the U.N. on Saturday, he also warned of "destructive movements in the camps aimed at preventing repatriation."

Myanmar's military began a harsh counterinsurgency campaign against minority Rohingya Muslims in August 2017 in response to an insurgent attack.

More than 700,000 Rohingya fled, many to Bangladesh, from what has been called an ethnic cleansing campaign involving mass rapes, killings and burning of thousands of their homes.