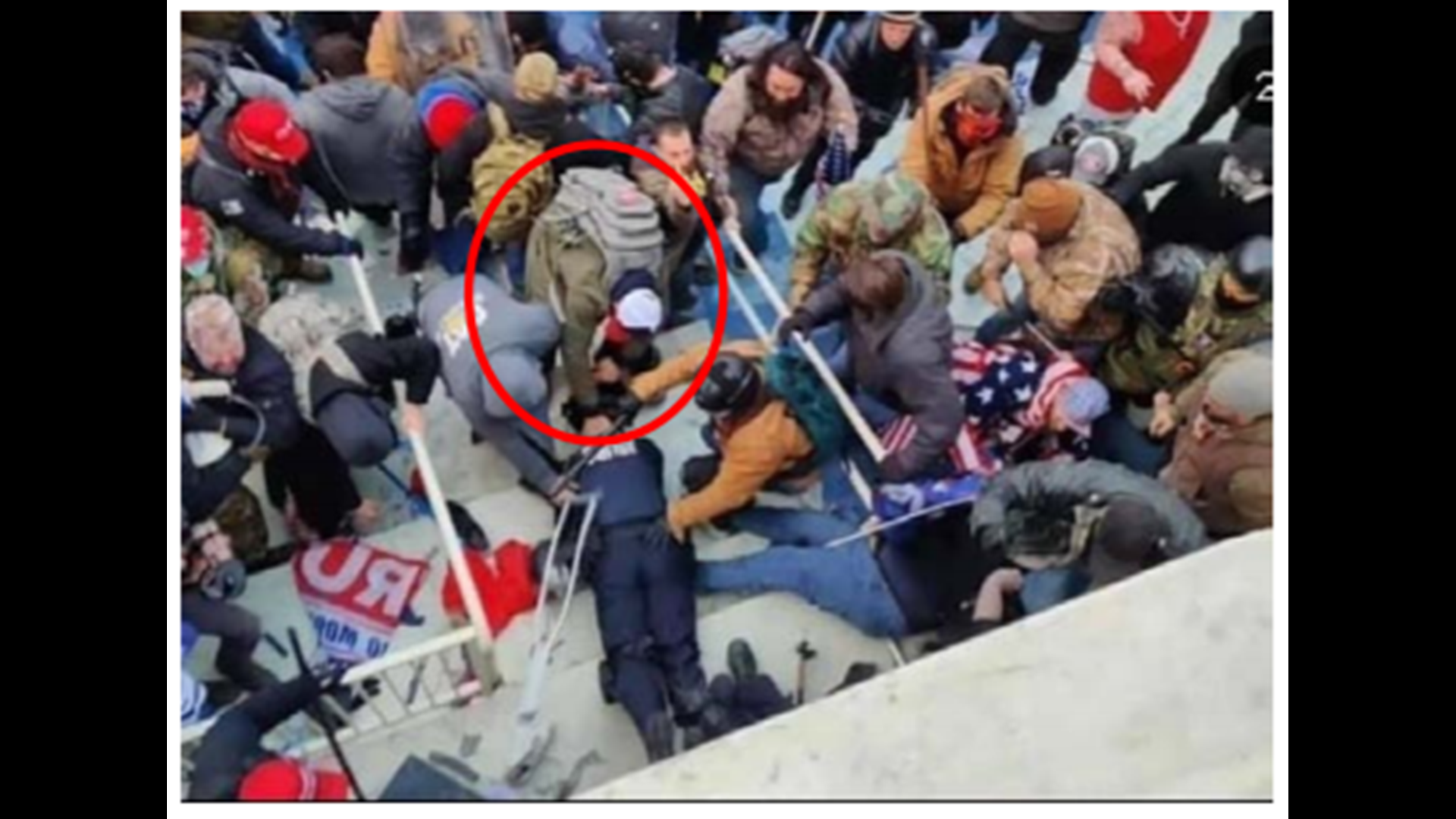 WASHINGTON — A fifth man is now charged in one of the most vicious attacks on DC Police Officers during the siege on the US Capitol January 6th.

Jack Wade Whitton of Georgia was arrested April 1 and charged with a number of criminal counts, including felony assault on a police officer. Four other men, Jeffrey Sabol, Peter Stager, Michael Lopatic Sr. and Clayton Mullins have also been arrested and charged in what prosecutors call a “brutal” assault on at least three DC Police officers.

According to court documents the assault on the officers, identified only as “B.M.” “A.W.” and “C.M.” last approximately 90 seconds.

Credit: US Department of Justice
Jack Wade Whitton is accused of beating an MPD Police officer with a crutch and dragging him into the angry mob January 6th

Prosecutors say two of the MPD officers, “B.M.” and “A.W.,” waded into the crowd trying to save someone they heard “was being trampled.” That’s when, prosecutors allege, “Whitton began striking at B.M. with a crutch.” The court documents allege Whitton grabbed at the officer “by the head and helmet” then dragged him down the steps in a prone position, over officer “A.W.” who still trying to hold the police line.

At that point one of Whitton’s co-defendants, Peter Stager, is accused of beating the officer “with an American flag on a pole.” As that was happening, prosecutors say MPD body worn camera video shows the officer identified as “A.W.” was also dragged into the mob, allegedly kicked by Whitton while he was down on the ground.

Credit: US Department of Justice
Jack Wade Whitton is accused of kicking an MPD Officer while on the ground and beating an MPD Police officer with a crutch and dragging him into the angry mob January 6th

Prosecutors say officer “A.W.” was also struck with poles and stomped on by several other people.

Later on during the night of January 6, prosecutors say Whitton shared a photo of his bloody knuckles in a text message, writing:], “This is from a bad cop... Yea I fed him to the people. Idk his status. And don’t care.”

RELATED: Capitol riot suspect was wearing 'I Was There' shirt when arrested in Dallas

The court documents the say the police officers, including the one dragged into the crowd face down, suffered only minor injuries.

Prosecutors are now trying to overturn a magistrate judge’s decision to release Whitton on bond. He remains behind bars pending that appeal.

We're tracking all of the arrests, charges and investigations into the January 6 assault on the Capitol. Sign up for our Capitol Breach Newsletter here so that you never miss an update.