The identity of Neal Kenneth Todd, who died while serving on the USS Oklahoma, was finally confirmed this year through DNA evidence. 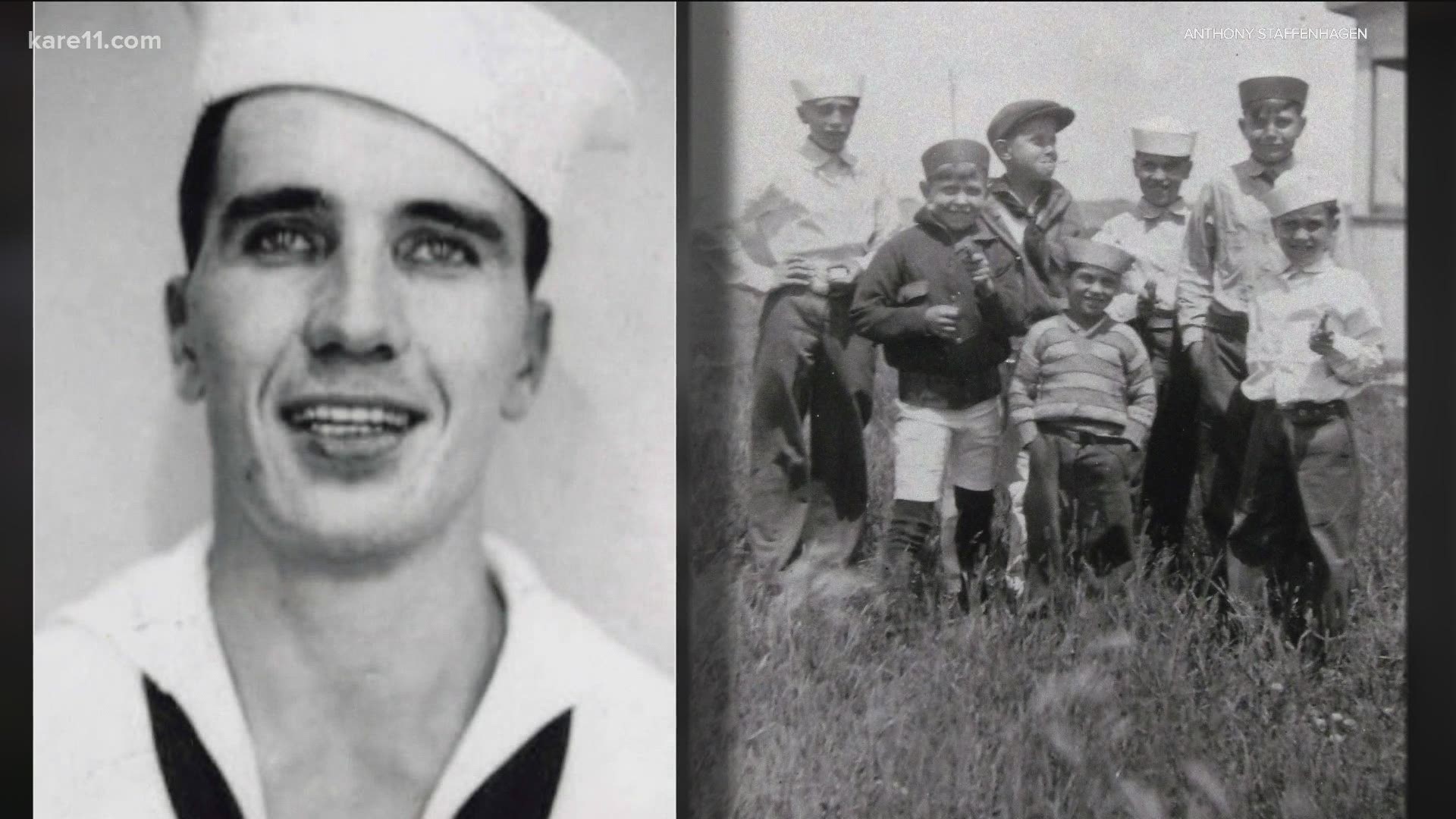 MINNEAPOLIS — Southwest Airlines Flight 1934 landed at 3:19 p.m. Thursday in Minneapolis, carrying passengers from Omaha after a layover in Denver.

But as the plane inched toward Gate H11 at MSP Terminal 2, onlookers in the window seats must have noticed something unusual. A sea of people, consisting of uniformed military members, firefighters, and more than 50 relatives, had gathered anxiously on the tarmac, many waving their cell phones in the air to record a moment they have craved for decades.

Credit: KARE 11
The remains of Minnesota native Neal Todd, who died at Pearl Harbor on Dec. 7, 1941, returned home on Thursday.

The Minnesota native had finally returned home, 80 years after he died aboard the USS Oklahoma during the attack on Pearl Harbor. All these years, generations of Neal’s family members have grieved his death, but they could never find true peace without a positive identification on his remains.

Neal's younger sibling Orville, who was eight years old the last time he saw his brother, stood just feet away from the casket. As the Honor Guard carried his brother's remains to the hearse for a military procession, the 88-year-old Orville saluted.

"I never thought it would happen," Orville said candidly. "We are happy to have him home."

A CALL TO DUTY

Neal Todd, the fourth-oldest in a blended family of 12, grew up in Akeley, Minnesota, a small town in Hubbard County near Leech Lake. In all, eight siblings served in the military in some form, with as many as five at one time during World War II. Orville, whose last name is Staffenhagen, later served in the Army after the war -- although he said he always had wanted to be a Navy man like his brothers.

Neal Todd, according to Orville, was "a good brother" and a "good family person."

"He was one of a kind. He was the friendliest man in the world," Orville said, "and the easiest to get along with."

Around the time Orville was in elementary school, Neal enlisted in the United States Navy in 1940, the year Hitler stormed through Western Europe after having launched World War II the year before with the invasion of Poland. The United States remained technically neutral in the war -- and bitterly divided at home about whether to join the war effort with the Allies -- but maintained a naval base at Pearl Harbor in Hawaii.

That's where Orville's brother Neal landed, with an assignment as a fireman on the USS Oklahoma, on the "date which will live in infamy."

"When Pearl Harbor hit," Orville said 80 years after the fact, "that was a big day."

Orville always knew his brother had lost his life on December 7, 1941, when Japanese aircraft bombed Pearl Harbor in a devastating attack that stunned a nation and led to U.S. involvement in World War II. It took a few months for the family to confirm the tragic news amid the chaos of the war, but by May 1942, the Minneapolis Tribune listed "Neal Kenneth Todd, first class fireman," among the 60 Minnesota Navy men killed in action dating back to Dec. 7. (Another brother, Wes, had narrowly escaped death after two sailors on the USS Oklahoma ushered him to safety.)

Credit: National Park Service
The USS Oklahoma capsized during the bombing of Pearl Harbor, killing more than 400 sailors on board.

More than 400 crewmembers died aboard the Oklahoma during Pearl Harbor, but with the military lacking advanced technology at the time to identify human remains, most of their bodies never came home. They sat in two local cemeteries throughout World War II, and in 1947, new efforts from the federal government helped identify the names of a mere 35 sailors. The military sent the rest of the anonymous remains to a Honolulu cemetery named the "Punchbowl."

Hundreds of families, like Neal Todd's in Minnesota, remained in limbo, knowing their loved ones had died at Pearl Harbor but unable to conduct proper burials.

"Neal happened to be the unlucky one in the family," Orville said. "It was a pretty trying time for my mother."

Eight decades passed without any news.

After the turn of the millennium, the U.S. Department of Defense finally started to reexamine remains from the USS Oklahoma, hopeful that new technology could solve some decades-old mysteries from Pearl Harbor. The efforts accelerated in 2015, when remains were exhumed from the "Punchbowl." Using anthropological and DNA analysis, the government has rapidly identified many of the crew members in recent years, including several from Minnesota. Seaman 1st Class Leon Arickx hailed from London, Minnesota; Fireman 3rd Class Kenneth L. Holm came from Clarkfield; Fireman 3rd Class Glaydon I.C. Iverson lived in Emmons, among others.

Relatives of Neal Kenneth Todd also submitted DNA for testing -- and this winter, they got a match.

According to the Department of Defense, Neal's remains were confirmed in February 2021, although family members said they didn't learn the official news until March. Neal's nephew, Anthony Staffenhagen -- Orville's son -- said his father was overwhelmed with emotion when he learned the news.

"Immediately, basically the first words out of his mouth were, 'I never thought this day would ever happen.' This is a miracle for him to finally have his brother come home," Anthony said. "It's something many of us have wanted for many, many years. It's gonna be a blessing now to finally bring him home."

The family and military set plans in motion for a July 8, 2021, return of Neal's remains, at Minneapolis-Saint Paul International Airport.

Two busloads of Neal Todd's relatives, hailing locally from Minnesota and from states as far away as Washington and Virginia, arrived early in the afternoon on Thursday at the airport fire station near Terminal 2. Before heading to the tarmac for the arrival of Neal's remains, the family took a few minutes to visit and chat about the momentous occasion.

The memories came rushing back to Orville as he prepared to see his brother again, eight decades after he headed for Pearl Harbor.

"It's great. Great," Orville said, before pausing to collect himself. "I was pretty young when he left."

Credit: Anthony Staffenhagen
Neal Todd was 22 years old when he lost his life at Pearl Harbor.

Finally, around 3 p.m., the family piled back on their two busses and made a short trip to the MSP Terminal 2 tarmac. They did not have to wait long; by the time they assembled in place, word spread that Southwest Airlines Flight 1934 had already landed. Slowly, from a distance, the airplane approached the gate as a fire truck sprayed water high into the air, following custom.

There was mostly silence -- other than the buzzing of aircraft engines -- when uniformed military men and women transferred Neal Todd's casket from the plane to the hearse. After a few minutes of reflection, the families left the tarmac and followed a military procession out of the Twin Cities, aided by flag-waving supporters and local fire departments.

Neal Todd's remains passed Fort Snelling en route to his hometown of Akeley, Minnesota, about 193 miles north of the airport.

On Saturday, he will be buried at the funeral service he has always deserved, with a final resting place right next to his mother and father.

"We are proud of him," Orville said. "We're sure proud to have him coming home." 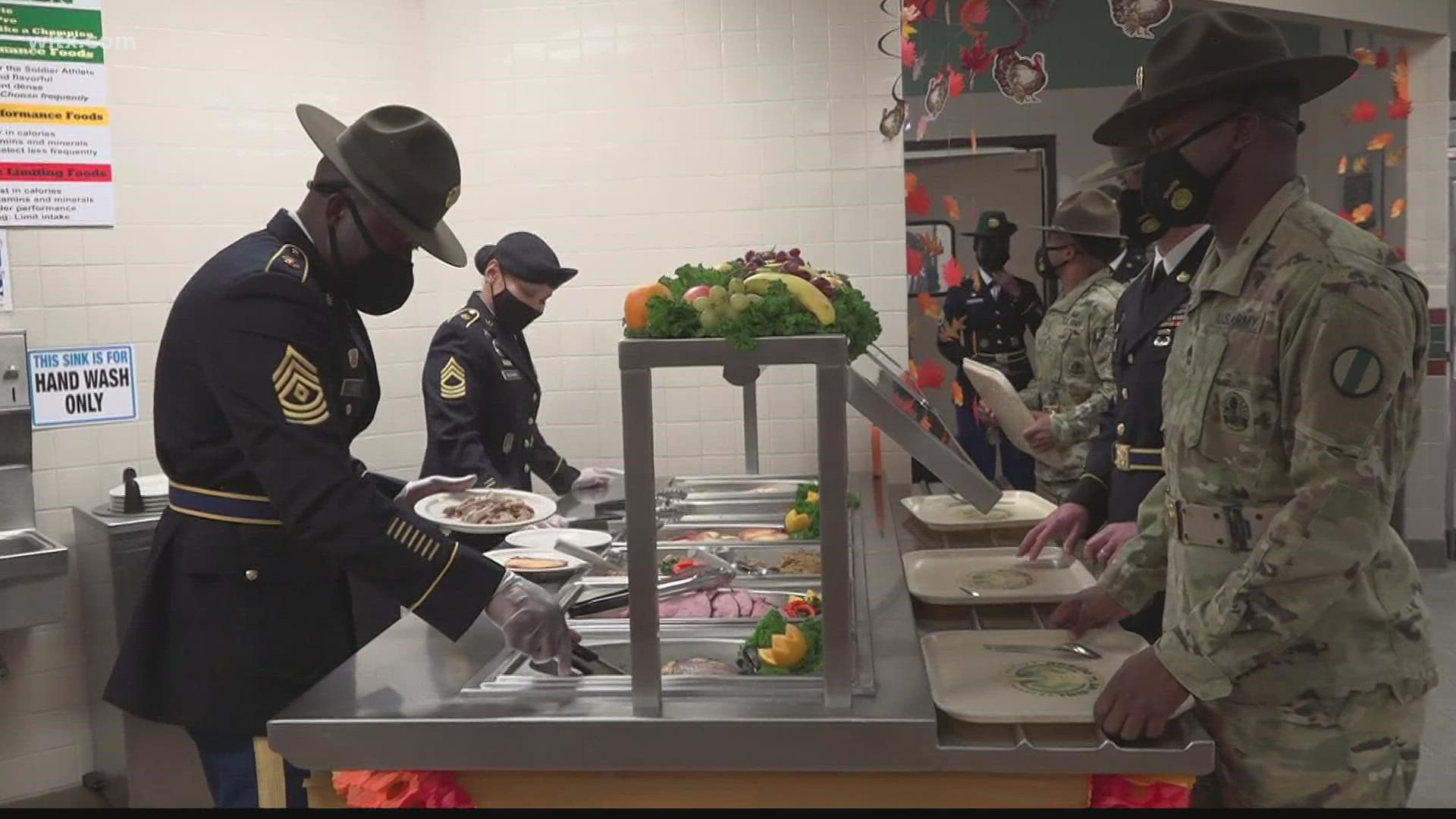 Fort Jackson soldiers get a day head start on Thanksgiving