An 18-year-old, charged with 1st degree murder, requested to walk with his class for graduation. His request has been denied by the Stokes County School Board. 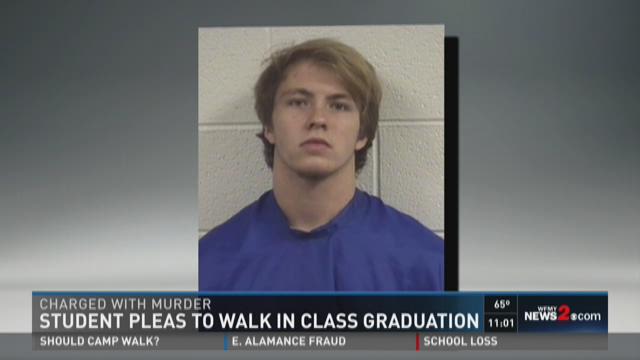 STOKES, COUNTY, N.C. -- An 18-year-old, charged with 1st degree murder wants the Stokes County School Board to allow him to walk with his class for graduation.

Blaine Camp is charged with first-degree murder in the death of Lopez Dalton.

Camp and four others charged with first-degree murder, after Dalton was shot and killed outside of a Huddle House in Rockingham County the day after Christmas on December 26, 2015.

According to reports and Camp's mom, Candi Jones, the North Stokes Senior was present at the time of Dalton's murder, but fled the scene.

Jamie Aiken, 19, Demarcus Kellam, 22, Tysean Kellam, 17, were allegedly waiting for Jesse McCollum, 17, Camp and Dalton to arrive at the Huddle House between Madison and Stokesdale.

Dalton was shot as he exited the vehicle. It's been reported that Kellam was the alleged shooter. Camp said he left the scene immediately out of fear for his own life.

"I was at the wrong place and the wrong time, I will admit that," said Camp, who was advised against discussing specifics about the pending case.

Camp was released on a $200,000 bond on February 2nd of this year. Under Camp's bond conditions, he must wear an ankle monitor and could attend work and school. However, on February 10th, Camp's mom, Candi Jones, received a letter from the school board, stating the teen was banned from school functions and school activities. It meant Camp could no longer play football or baseball, attend prom or graduation.

When asked why he wanted to walk at graduation he responded, "I earned it. I feel like a lot of students don't want to be in class or graduate on stage and I would give anything to do that. I work and I made good grades before this and since this all happened. People don't know the whole story and I think they might be scared of me. But if they think I'm that much of a danger, I would even be willing to walk on stage in handcuffs."

Camp added graduation is a once in a life-time milestone in a teen's life and should the charges be dropped, he wouldn't have the second chance to walk with his class.

In a closed door meeting on May 16th, Jones met with school board members to discuss the possibility of Camp being allowed onstage to graduate. Camp's bail bondsman and other community members wrote letters of support for him. Jones said board members agreed to review and discuss Camp's pending graduation and mail her a letter with their decision.

A spokesperson with the school board said they could not comment on individual student matters.

Camp finished two online courses at the school and received a 'B' average. He also works for Second Chance Farms and has a second job cleaning houses.

"Since he's been home, he's done everything accordingly," said Jones. "I feel like he's earned that privilege back."

The honor roll student is still pictured in his high school yearbook, dabbing with his former coach and was even named "best flirt."

Camp is scheduled to graduate on June 10th. His next court date is May 31st.