'There is no glass ceiling anymore': South Carolinians react to diverse Cabinet picks

Should all of President Biden's Cabinet picks be approved, it will be the most diverse administration to-date. 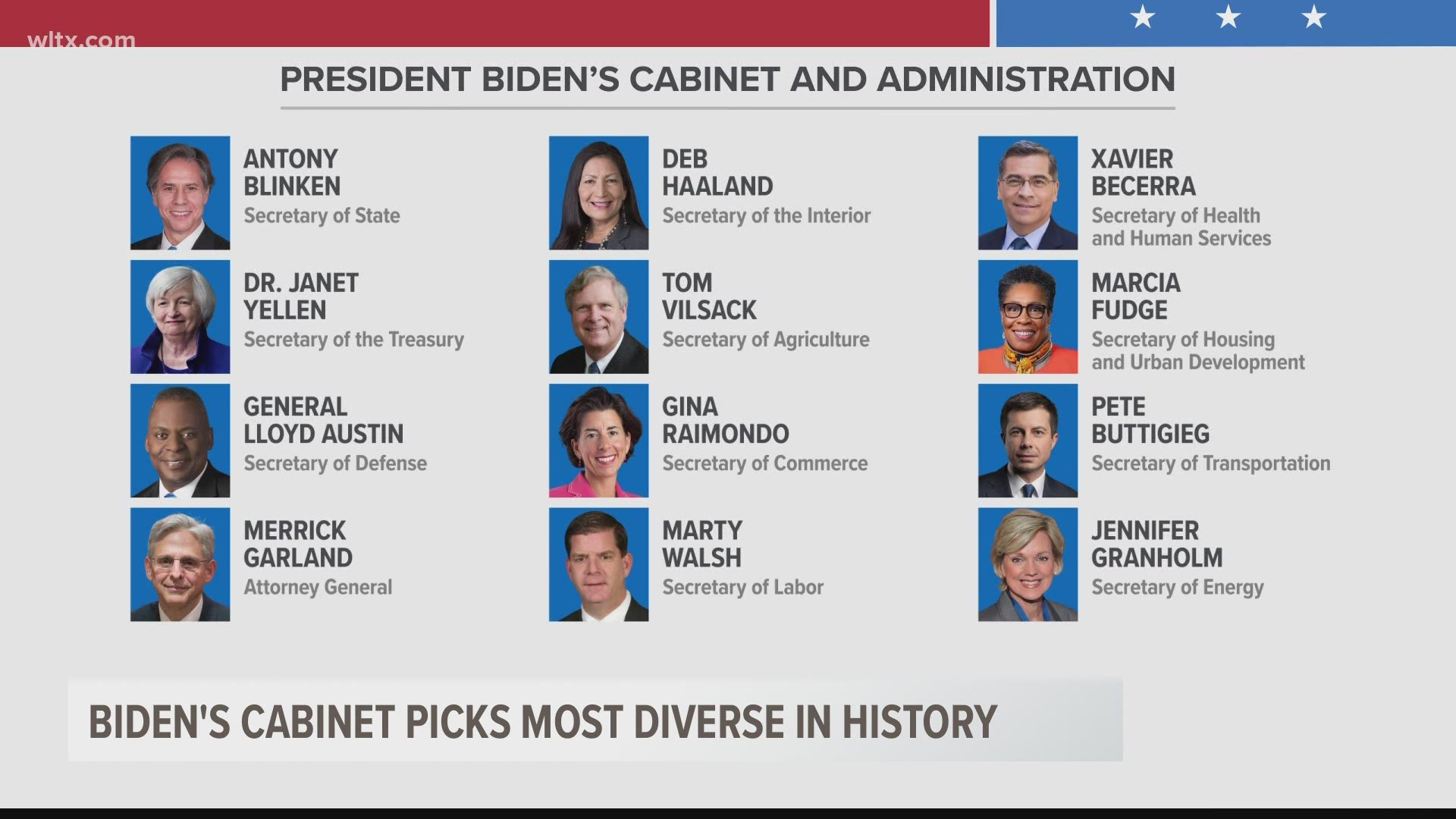 President Joe Biden is the first in modern U.S. history to begin his tenure without a single confirmed cabinet secretary.

Late Wednesday, Avril Haines became the first Cabinet nominee to be confirmed. She's the first woman to serve as Director of National Intelligence.

Should all of Biden's Cabinet picks be approved, it will be the most diverse administration to-date.

This will be the first Cabinet ever evenly composed of men and women, and the first with the majority of people of color.

A record 12 women are slated to serve in Cabinet and Cabinet-level positions. This includes Kamala Harris, the first female, Black and South-Asian Vice President.

"It's going to be more people working together," said Barbara Rackes, CEO of South Carolina Women in Leadership.

Rackes believes the Cabinet's diversity better reflects the perspective of our population and serves as a model for young women.

"It indicates that there is no glass ceiling anymore," said Rackes. "For South Carolina, when we see the change at the national level - whether it's the Congress or whether it's the Cabinet - I feel like we can start to leverage that with our South Carolina women who are perhaps more reluctant to step into leadership roles. I'm really excited that we've got such a great model that we are able to follow."

The impact of this historic cabinet going forward, she says, will be a shift of focus and more productivity.

"We have learned to be cooperative, to be persuasive and I think that's one of the things we're going to see coming to the table," said Rackes. "We're also going to see women wanting to solve problems as opposed to building partisan antipathies."

We walked through downtown Columbia Wednesday evening to ask opinions of the cabinet picks.

"A diverse cabinet is what America really is, so [Biden's] representing what America looks like," said Stuart Barnes.

"I am not a believer in it, nor am I an enemy of it," said Leonard Hawthorne. "I want to see action. You can tell me all these great things, these wonderful things like every other politician that came before you no matter what color there was in the presidency. Do something."

"I'm really excited to see a woman in office," said Amanda Henry. "I think it's great for girls to look up to and I think [Kamala's] going to be a fabulous role model for generations to come."

"I think [Kamala] can serve as a stepping stone for future leaders," said Amelia Hill.

"They have a diverse cabinet together, I think that's a good idea," said Gilbert Jacobs. "I think the country needs that."

"I'm hoping to see more female leaders in office from now on because I think this was a big breakthrough for young women like us," said Dori Barlow. "We're in college, we're studying to be successful, so I'm hoping that other people will be inspired. Just because you're a woman doesn't mean you can't be a leader. I just hope that inspires generations to come."

Also making history: A record number of women are serving in the 117th Congress.

Each of President Biden's Cabinet nominees will first need to be confirmed by the US Senate.