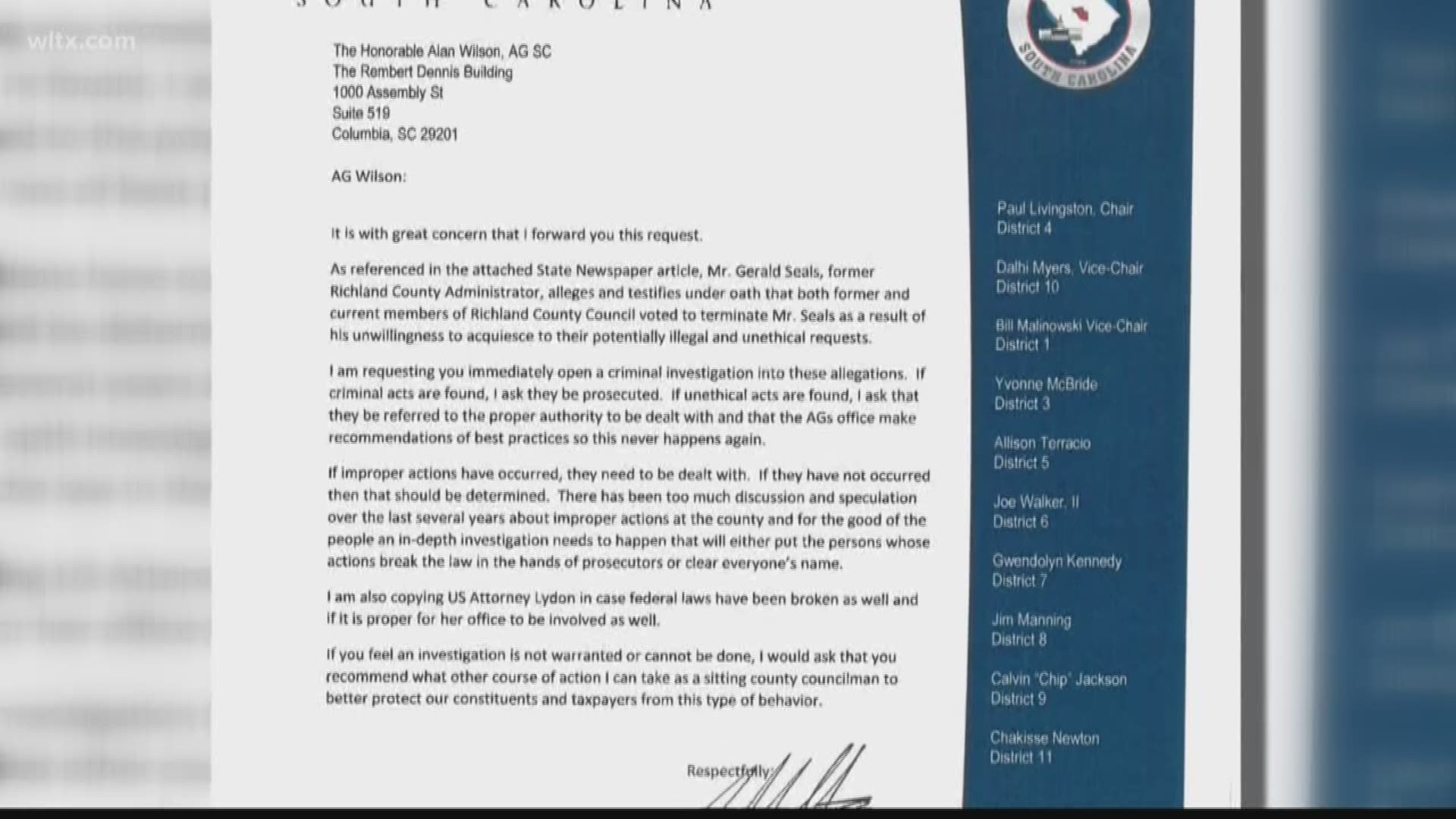 Seals was fired in 2018 and eventually settled with the County for $1 million. The settlement agreement is being legally challenged by a Richland County citizen.

This week, Richland County Councilmember Joe Walker wrote a letter asking for a criminal investigation into Seals' firing and the claims Seals made in a deposition earlier this month about his firing.

Parts of the deposition, published in full with Walker’s letter, highlight financial concerns that have been around for years with the County's penny tax, and other issues.

In the 100-page deposition transcript, Seals claims he was fired in part for releasing financial documents that shed a negative light on Richland County’s handling of the penny sales tax.

“Also there was about $1.3 million that the County paid that we could not justify the payment that would have went to the PDT Group. And they were, those Council members that I just mentioned, very upset because that information became public information,” Seals said in the deposition transcript.

The PDT is otherwise known as the Program Development Team, which is associated with the penny tax, according to Richland County’s website.

In a phone call Tuesday afternoon, Walker said it referenced the same money that was the center of a South Carolina Supreme Court case finalized in March of last year.

The Court ruled the penny tax revenue must be spent solely on transportation projects.

The case’s decision specifically mentioned $1.1 million in payments that were allegedly misused.

The Court also criticized $25,000 being sent monthly to two public relations firms, according to the same document.

Additionally, in the deposition Seals claimed there was $26 to $30 million in County money that could not be found.

“Well, it relates back to some things that had been misspent. We ended up finding – let me state it a different way. We tried – found that there was at least 30 – I think initially it was 26 million. Eventually something like $30 million that had been – we could not find it,” Seals is quoted in the deposition record.

All of which are discrepancies Walker said deserve criminal investigations.

“It wouldn't be too difficult to look back at some of the programs, some of the issues, some of the black clouds that continue to follow council around. And my intent is to either close those chapters and move forward or expose the malfeasance associated with them, presumably if there is, and allow the prosecutors to do their job. I think a perfect example of this is the audits that we've seen associated with the PDT,” Walker said this week.

WLTX has filed an open records request for the most recent penny tax audit. We also reached out to the County for clarification on Seals' claims of the County’s missing millions.

“It is generally the practice of the County Administration to not comment on pending litigation,” a county spokesperson said in an email Tuesday afternoon.

The citizen lawsuit against Seals and the County’s $1 million settlement is ongoing.

You can read the entire deposition here: