The Senator said immigration reform was on the mind of the President, along with a potential infrastructure deal. 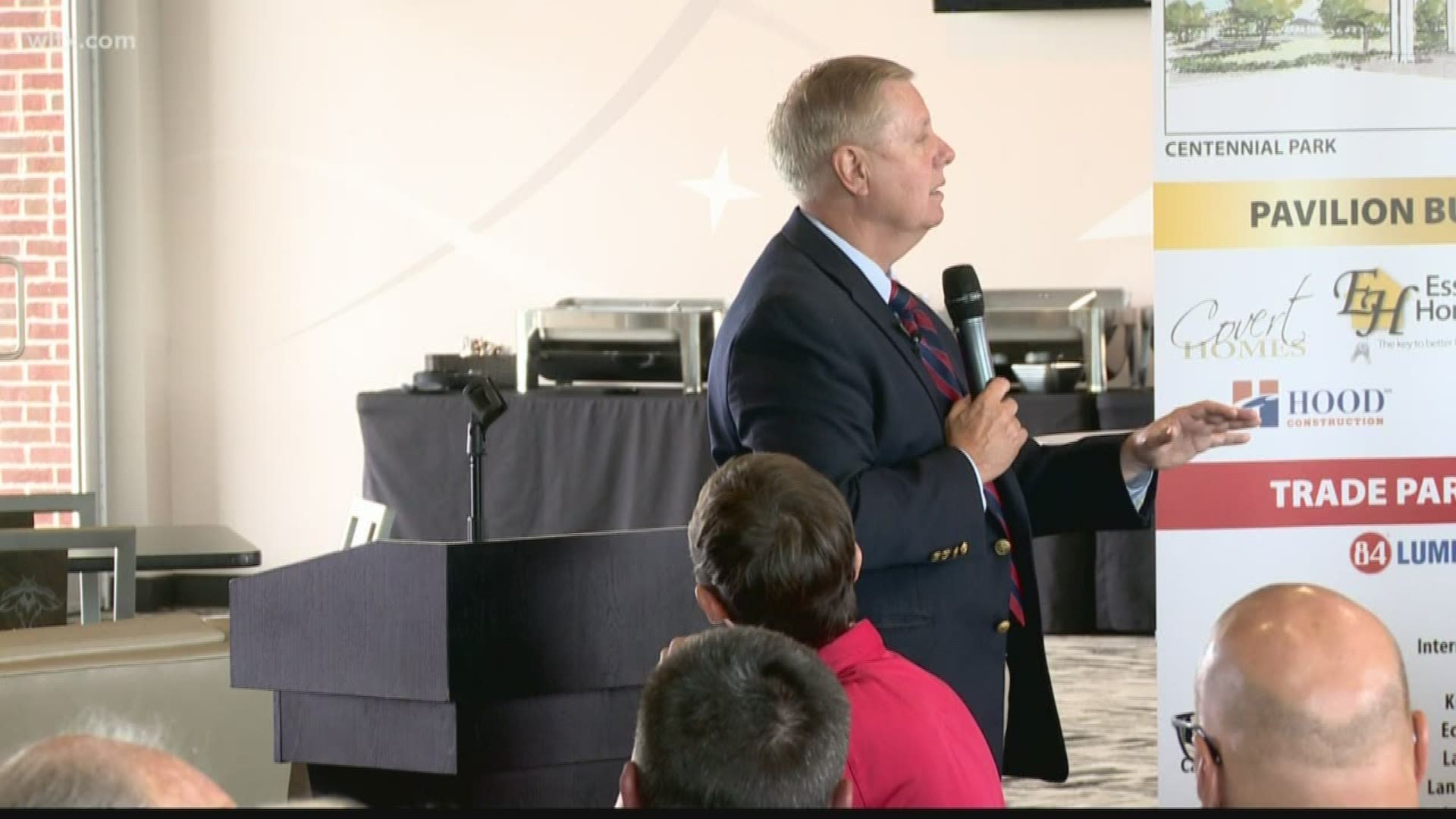 COLUMBIA, S.C. — Senator Lindsey Graham was in Columbia on Thursday afternoon to speak at a Building Industry Association of Central South Carolina meeting.

The Republican Senator spoke on a wide range of issues including gun laws, immigration reform, and the economy.

Graham spoke to the group for about 35 minutes and also took questions.

During the meeting, Graham said he was working with President Donald Trump on federal support for state-level red flag gun laws.

“It's getting harder and harder to understand the system where 40 visits to the cops, an FBI hotline tip that the guy's about to kill everyone at the school, nothing happened. Florida after that passed a red flag law. So, I'm not here to tell South Carolina what to do, I'm here to help the President create a national grant program to deal with this issue,” Graham said to reporters after the meeting.

Graham added that he did not support a federal red flag law, but would give the grants to states taking up the issue. However, Graham said states would need to meet thorough and fair due process requirements before receiving the money.

He told the crowd the implementation of red flag restraints would have to be law enforcement driven and the cases handled fairly in courts of law, before taking guns away from perceived dangerous people.

“There may be a deal done early next year where we give a pathway to citizenship for non-felon DREAM Act recipients and in return get a bump in legal labor. So that the resorts and the hotels that maybe you build houses or structures around have the labor they need to stay in business,” Graham told the group.

Graham said he and the President had discussed the issue at length and that their immigration reform proposal would include green card reform as well.

The Senator continued that he would also urge asylum reforms so asylum-seekers would have to apply in their home country, before leaving for the United States. Graham added that he believes both parties are divided over immigration reform and he is not a Republican that supports declining legal immigration.

Graham said the GOP needs to be clearer about promoting legal immigration for the health of the United States workforce, win more Hispanic voters, and grow the party.

After recent stock market declines, Senator Graham said he believes the economy is sound in light of trade disputes with China.

“This China dispute is going to cause us some pain. But if we don't pay now, we're going to pay later. I told the President this morning when I talked to him, you don't have any choice. If you don't get China to change their behavior on your watch, by the end of this century they're going to dominate the world economy cause they cheat us out of market share,” Graham told reporters after the meeting.

The Senator told the crowd he hopes bipartisan support exists for a trillion dollar infrastructure deal before 2020, stating he thinks it would help both parties.

When it comes to potential challengers for President Donald Trump, Graham offered his perspective.

“I'm sure he'll do better than I did, the bar's pretty low. But, Republicans in South Carolina are 90 percent plus supportive of the President's agenda. About 2 out of 3 wish he would tone it down in terms of tweeting. But, when it comes to policy; for the economy he's cut taxes, rebuilt the military, deregulating the country so the economy can actually grow, putting judges on the bunch that South Carolinians appreciate. I'll leave it up to Mark as to what to do,” Graham said about potential primary challenger Mark Sanford.

At the end of the event, a PAC affiliated with the National Association of Home Builders presented the Senator with a check for $5,000.