The proposal would fully fund body cams, create baseline standards, and create a 'duty to intervene.' 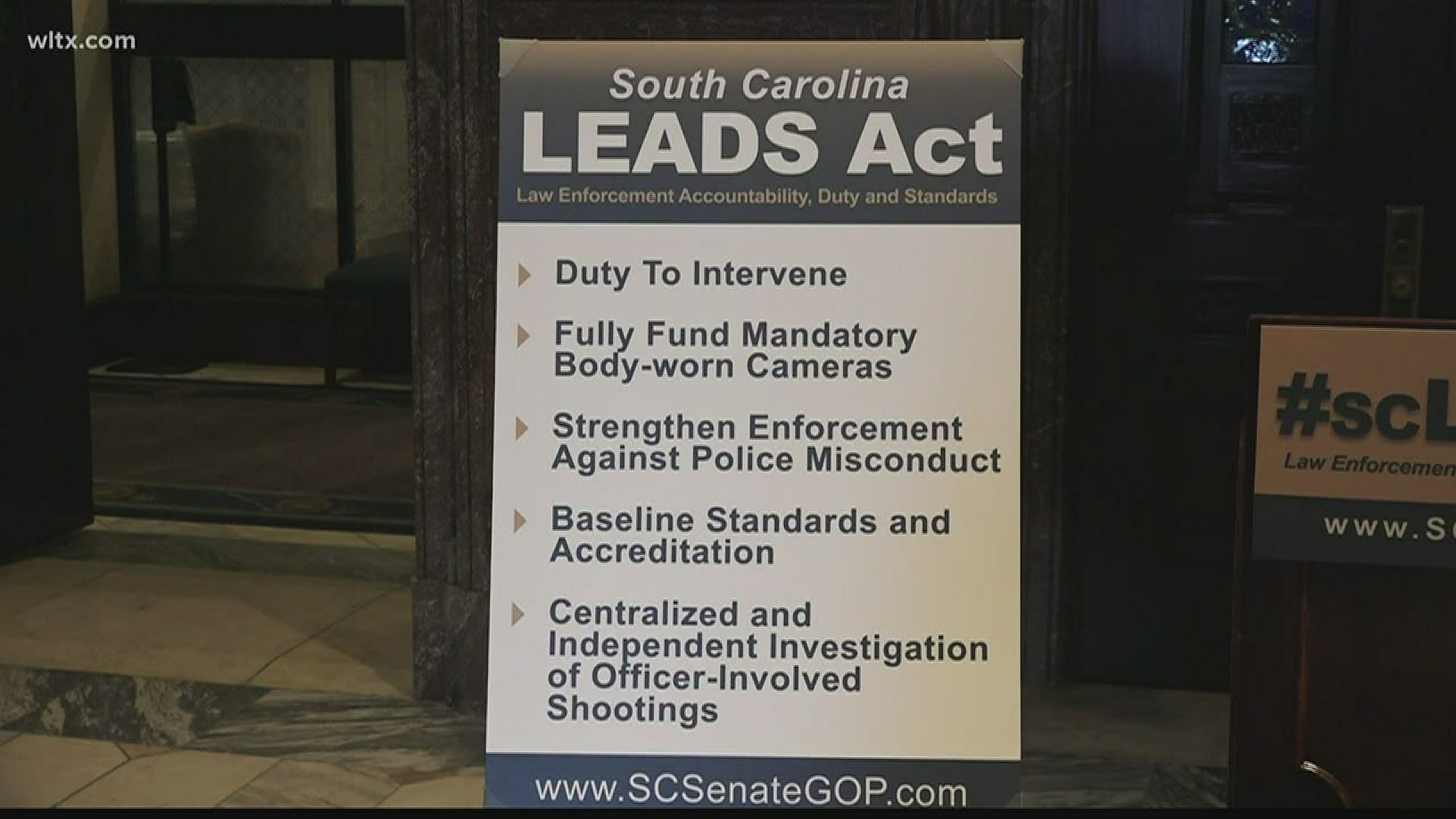 “We're not interested in window dressing, right? There are some real changes that need to be made. We want to use the situation we're in, the momentum that we have, to accomplish some of those meaningful changes,” said Senator Shane Massey, (R) Edgefield.

“The consistency was we need to be more transparent, we need to repair the trust of our law enforcement, and we need to get the bad apples out of the system,” Bennett said on Monday.

Massey said all four Republican senators present at the press conference had spent weeks talking with constituents, law enforcement, and protesters about how to rebuild trust and reform policing.

“We've been talking to the people that we represent, and it's interesting though that the things that I hear out of Lexington, are very similar to what Senator Bennett hears out of Summerville, or what Senator Turner hears from Greenville, and very similar to what Senator Hembree hears out of Myrtle Beach. So, if we haven't heard specifically from-- or had specific conversations with people who organized events right outside the State House, we've been hearing the same things that you see in those protests,” Massey said.

“We have been listening to our constituents, we have heard a good bit from our African American constituents, who have been expressing not only that they're angry about what happened, but quite frankly they're scared,” Massey continued.

The Republican proposal would:

Senator Bennett also spelled out other reforms the General Assembly has enacted in the last five years to increase law enforcement accountability, including mandating body cameras.

The four lawmakers said to fully fund the mandate would require another $10 million.

Senator Greg Hembree said the requirement to intervene was the number one reform constituents requested.

“If you fail to intervene, that would be per say, misconduct for professional standards purposes. And, of course, you could be subject to losing your certification, if you were found guilty of that, and you would be subject to criminal prosecution,” Hembree said.

The Horry County Republican also said the baseline standards could eliminate some practices from police work.

“Under this act, the Law Enforcement training council would establish baseline standards on a host of different subjects, obviously, one of them, one of the most important being use of force, prohibiting chokeholds and neck restraints as a method of subduing a suspect,” Hembree said.

The Act would also prohibit agencies from investigating themselves when an officer-involved shooting takes place, which Senator Hembree said was normal practice.

However, the Senator said, to his knowledge, the Richland County Sheriff’s Department was the only agency which investigates itself after shootings.

“Under this structure, all of those cases would go to the Attorney General, for essentially for investigation, and for making a determination if there are criminal charges to be brought against that officer, SLED would be in charge of all the investigations,” Hembree said.

“No. We've been investigating our own now for about 5 years. The reason why we do that, we're able to get it done a lot quicker and we're able to get the information out. One thing you'll notice is, if we're involved with a critical incident, we don't say 'It's under investigation and we can't discuss it.' You're going to hear from me very quickly and we're going to put body cameras out, we're going to put the information out, we get it out. We don't hold it. So, we've been very successful and the public in Richland County has been very happy with it. We don't get complaints from Richland County citizens that we need to change anything with that,” Lott said at the time.

The group of senators said the LEADS Act would require bipartisan support to pass and said some of the proposed reforms have been suggested by Democrats in the past.

“Today, Republicans introduced the S.C. LEADS Act, in an attempt to provide law enforcement with accountability and duty standards. For years the GOP has led the resistance to any substantial checks on law enforcement. Because they often remain silent on issues of race, equity, and disparity, I am thrilled to see Republicans publicly supporting the change we all know is needed. While the five steps presented are a good start, we know from the deaths of George Floyd and Rashawn Brooks simply mandating body camera usage is not enough to prevent police overreach. My hope is that they are not simply grandstanding and will work with Democrats to permanently end police brutality against Black Americans. This is also a great time for Republicans to join us to remove the Ben Tillman statue and any other monuments erected in backlash to the expansion of civil rights.”

Due to the COVID-interrupted General Assembly session this year, lawmakers would be unable to get a vote on the Act before 2021, but the senators want to start committee testimony as soon as possible.

Senator Massey said they would work diligently to make sure minority communities are notified extensively about committee meetings and times testimony can be offered.