When directly asked if he would support Trump again were he to win the nomination, McConnell responded: “The nominee of the party? Absolutely.” 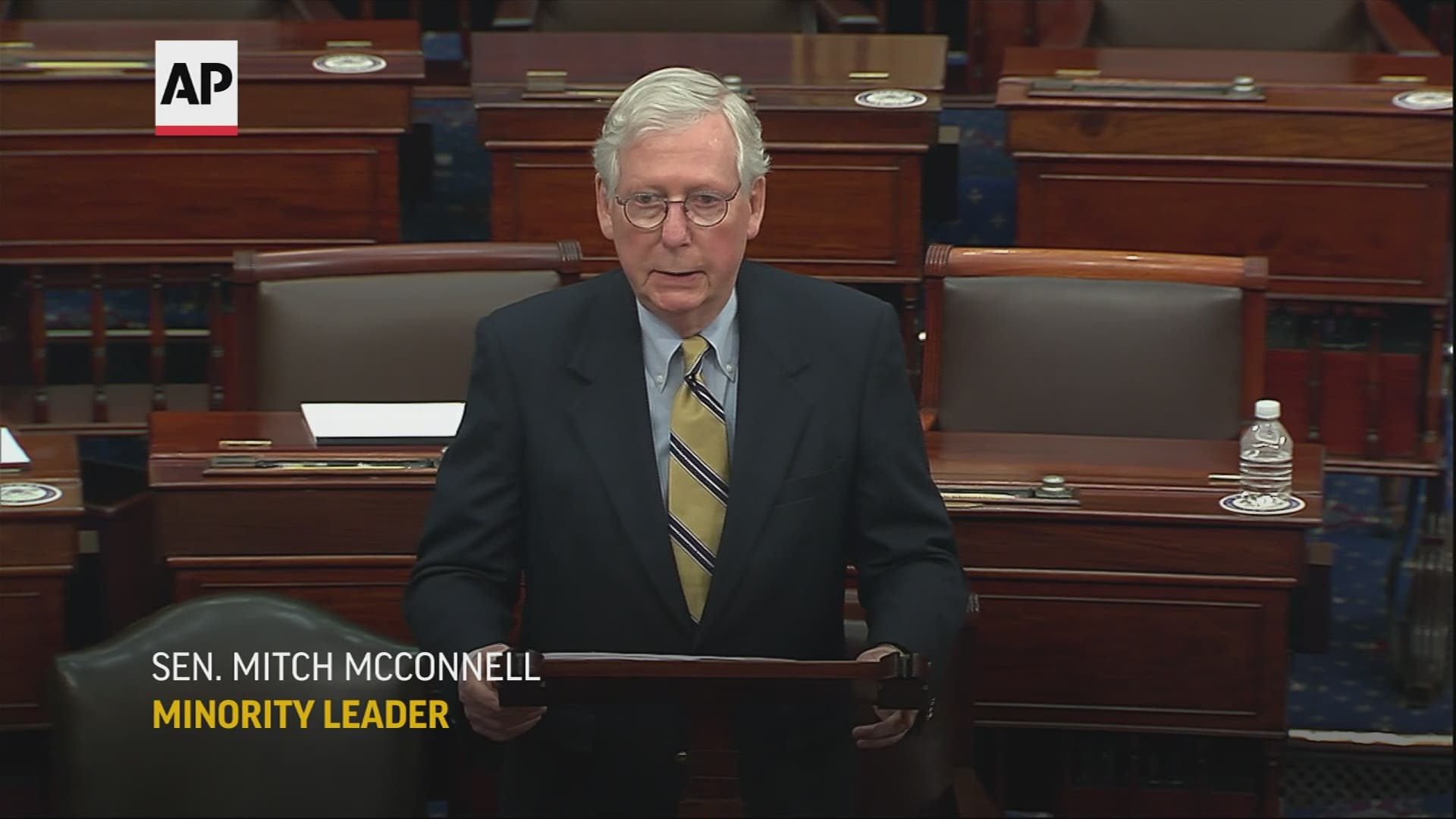 LOUISVILLE, Ky. — Less than a month after excoriating Donald Trump in a blistering floor speech, Senate Minority Leader Mitch McConnell now says he would “absolutely” support the former president again if he secured the Republican nomination in 2024.

Speaking to Fox News on Thursday, the Kentucky Republican said there’s still “a lot to happen between now” and the next presidential election.

But when directly asked if he would support Trump again were he to win the nomination, McConnell responded: “The nominee of the party? Absolutely.”

After voting to acquit Trump at his impeachment trial less than two weeks ago, McConnell blasted him as “morally responsible” for the Capitol insurrection.

The former president charged in his lengthy statement that the "Republican Party can never again be respected or strong with political 'leaders' like Sen. Mitch McConnell at its helm."

"Mitch is a dour, sullen, and unsmiling political hack, and if Republican Senators are going to stay with him, they will not win again," Trump said. "He will never do what needs to be done, or what is right for our Country."

Trump went on to say, "The Republican Party can never again be respected or strong with political “leaders” like Sen. Mitch McConnell at its helm. McConnell’s dedication to business as usual, status quo policies, together with his lack of political insight, wisdom, skill, and personality, has rapidly driven him from Majority Leader to Minority Leader, and it will only get worse. The Democrats and Chuck Schumer play McConnell like a fiddle—they’ve never had it so good—and they want to keep it that way! We know our America First agenda is a winner, not McConnell’s Beltway First agenda or Biden’s America Last.

RELATED: Trump: McConnell is a 'sullen and unsmiling political hack'

Read Trump's full statement after McConnell's speech which said the former president was 'morally responsible' for the Capitol riots.

House Speaker Nancy Pelosi says Congress will establish an independent, Sept. 11-style commission to look into the deadly insurrection that took place at the U.S. Capitol.

House Speaker Nancy Pelosi announced a 9/11 style commission will "investigate and report on the facts and causes relating to the January 6, 2021, domestic terrorist attack upon the United States Capitol Complex … and relating to the interference with the peaceful transfer of power."

1 / 50
AP
This undated photo provided by the Washington County, Arl., Sheriff's Office shows Arkansas resident Richard Barnett, who was taken into custody Friday, Jan. 8, 2021, and is being held in the county jail after he was charged by federal prosecutors with three counts for storming the U.S. Capitol on Wednesday in Washington. Barnett was in a viral photo where he could be seen inside House Speaker Nancy Pelosi's office. (Washington County Sheriff's Office via AP)