Tillman, a former Governor and Senator, defended lynching, disenfranchised Black South Carolinians, and participated in a mob massacre, according to historian. 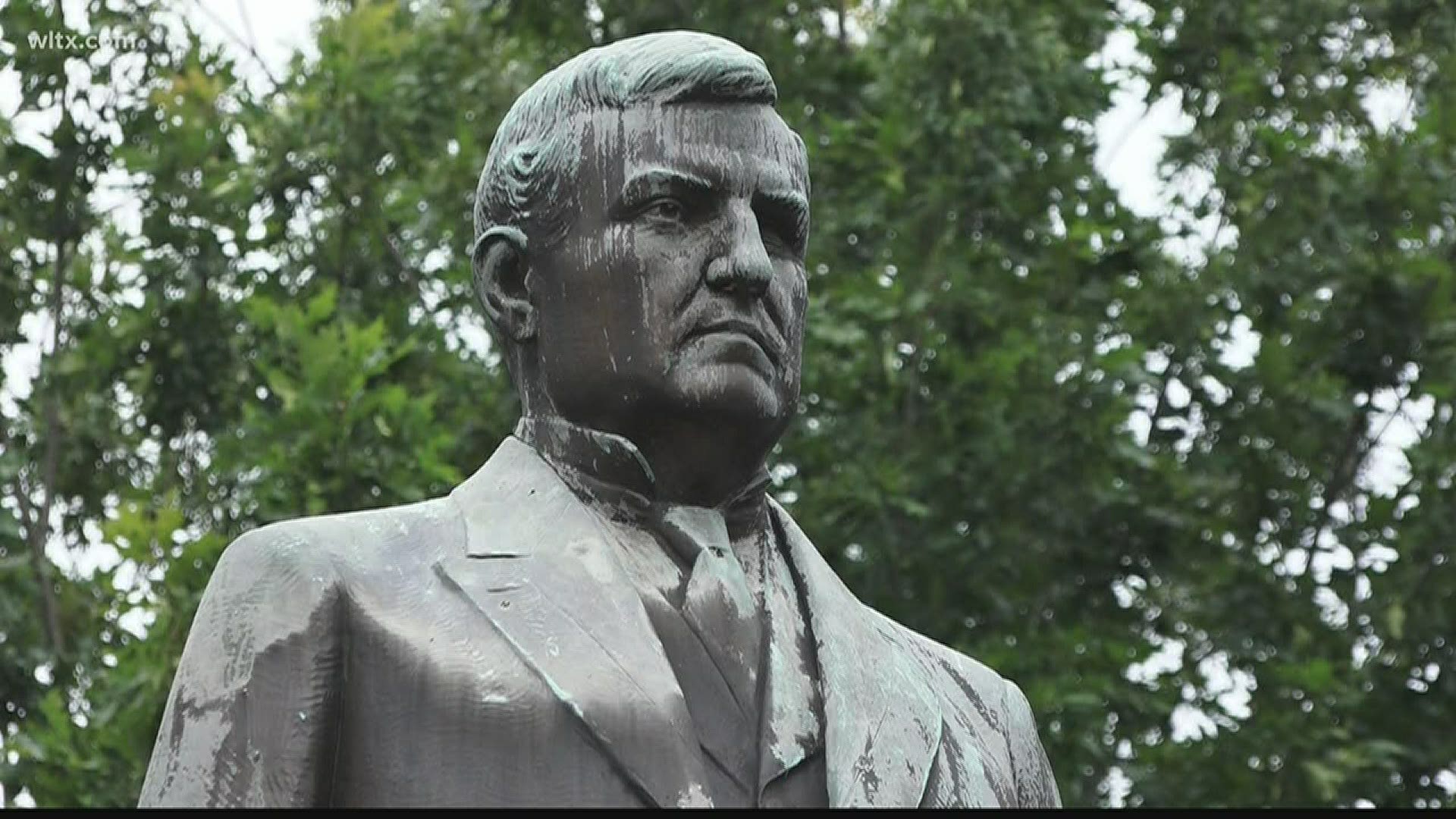 COLUMBIA, S.C. — A South Carolina state lawmaker is calling for the removal of a State House statue memorializing a figure whom defended lynching, killed, and disenfranchised Black South Carolinians, according to a historian.

Benjamin Tillman's statue has been on the State House grounds for 80 years.

Not to be confused with a Confederate memorial, Tillman lost his eye in an accident early in life and never served in the Civil War.

“Tillman comes to power, first as Governor, and implements his program which a key part is the Constitution of 1895, disenfranchisement of African Americans, and then enters the United States Senate and serves in the Senate until his death. He was-- in the Senate he was not a big figure in the Senate, he particularly made waves because he was an outspoken defender of lynching in the South,” Brown said.

Tillman also participated in the Hamburg massacre, according to Brown’s recounting.

“This event that grew out of white resentment of Black militia parade in what is now North Augusta, basically, the incident culminates in basically the execution-style killing of a half dozen African Americans,” Brown continued.

Now, as protesters have gathered at the State House for over a week to protest the death of George Floyd, state Representative and Columbia Democrat Seth Rose said it's time for Tillman to go.

“I think we need to objectively review the statues and monuments that we have on this public property, a place where people should be able to assemble and not have statues of individuals that promoted racial injustice, promoted the killing of African Americans, and took great joy and pride to their dying days with doing so,” Rose said a few feet from the statue on Monday.

Rose introduced a resolution to remove the statue, which cannot be considered this year due to General Assembly rules.

Lawmakers have already approved the proposed measures they’re able to come back and discuss later this year, after the regular session was disrupted by the COVID-19 pandemic.

Rose’s resolution, which was not approved by the House or Senate, cannot be debated later this year.

“We need leaders that are standing up and speaking out now,” Rose said.

The Columbia Democrat also wants a committee to review other monuments on the State House grounds. He also called on Governor Henry McMaster to denounce the monument.

However, there is an existing State House Committee, under the leadership of Senate President Harvey Peeler, which can review alterations or renovations to the property.

The Heritage Act, which passed in 2000, also prohibits the relocation, removal, distribution, or alteration of monuments related to, “The Revolutionary War, War of 1812, Mexican War, War Between the States, Spanish-American War, World War I, World War II, Korean War, Vietnam War, Persian Gulf War, Native American, or African-American History monuments or memorials erected on public property of the State or any of its political subdivisions.”

However, it is possible if a removal proposal receives two-thirds majority in both chambers of the General Assembly.

Brown said the law may not apply since Tillman’s statue likely is not considered a war memorial.

Tillman, who did not serve in the Civil War or World War I, would not classify. However, a section of one of the plaques on the statue recognizes Tillman’s service on the Senate Committee of Naval Affairs during the First World War.

When asked why Rose started with Tillman’s statue and not other Confederate memorials at the State House, Rose said Tillman’s personal history was, “Grotesque.” Brown agreed.

“I'll let them figure that out. I mean do we remove George Washington's monument in D.C.? I mean I don't know where all this stops,” Graham said.

Tillman's statue has been on State House grounds since May 1, 1940, one of the plaques describes him as a patriot and statesman.

Brown said the timing of the statue, dedicated in 1940, is important to the story as well.

Interest in a Tillman statue grew in 1929, but funding ran out of steam during the Great Depression. Eventually, $16,000 in state and private funds were used in 1940 to finally place the statue on the grounds.

At the same time, the NAACP was actively pushing federal anti-lynching legislation across the country in the mid-30s and early 40s, according to Brown.

“The rise of that issue is what fuels the new interest in the Tillman statue,” Brown said.

“The Heritage Act provides a good framework for how to deal with these issues – it preserves historical monuments while allowing South Carolinians to voice their concerns through thoughtful and democratic debate among their elected representatives. That debate has proven to be important in the past and needs to be prioritized in making these decisions in the future."