Here's who's running for mayor, city council in Columbia 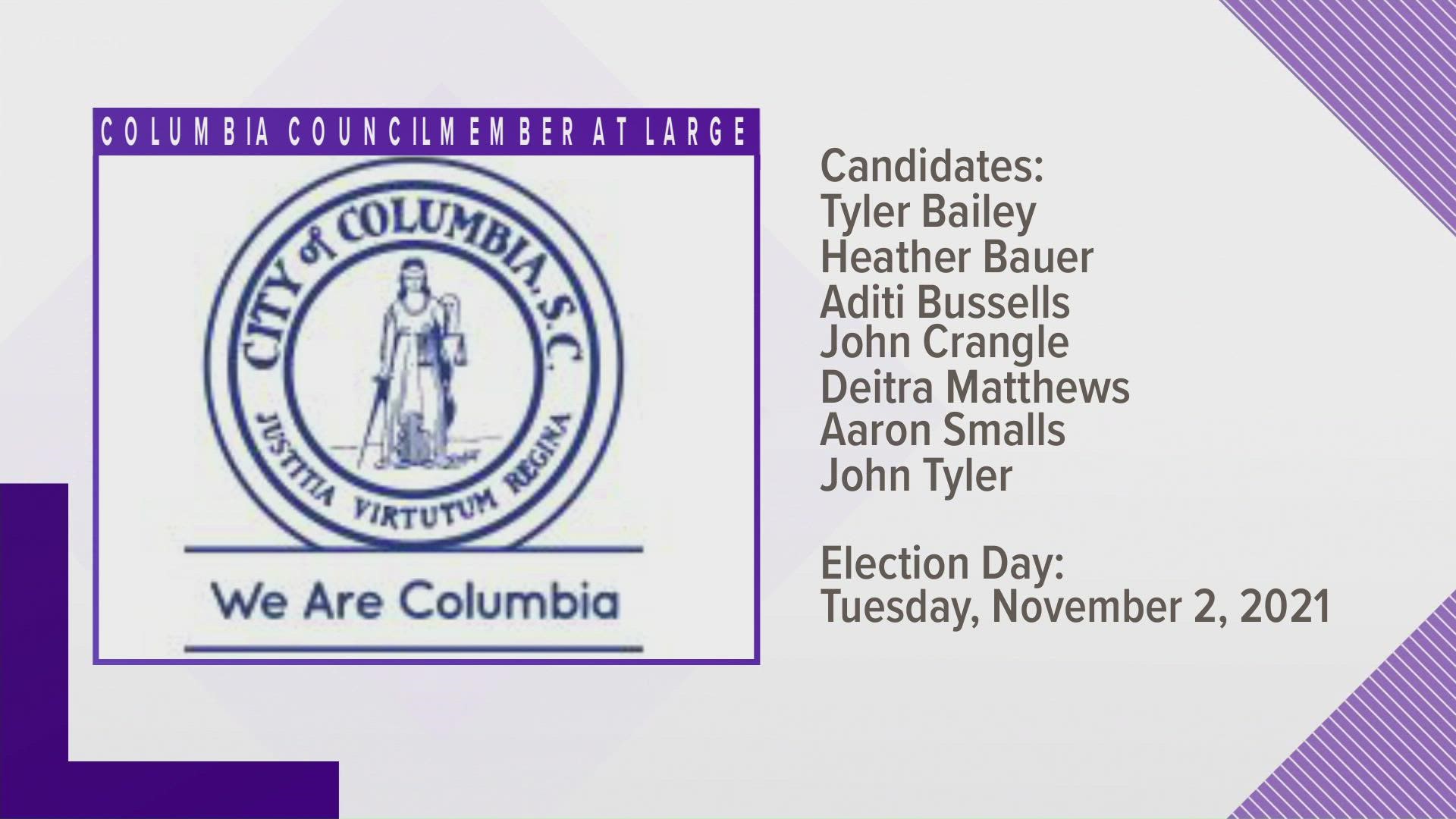 COLUMBIA, S.C. — Filing closed noon Friday, August 13, for individuals to file a Statement of Candidacy with the Columbia City Clerk's Office in the upcoming municipal election. Here is a list of candidates and brief biographical information of individuals seeking office for Columbia Mayor and City Council At-Large, District 1 and District 4 seats.

The election is November 2, with runoff election scheduled for November 16, if necessary.

Moe Baddourah. First elected to Council in 2012, the former Columbia City District 3 councilman left office in 2019 after being reinstated from a 19-month suspension from office by SC Gov. Henry McMaster. The suspension – from March 2017 to October 2018 -- came after an indictment on a 2016 arrest on charges of criminal domestic violence stemming from an altercation with his then-wife in a restaurant parking lot. Baddourah went into pre-trial intervention and the charges were subsequently dropped and Baddourah was reinstated to his council seat – which he lost to Will Brennan in 2019. Baddourah ran for mayor in 2013, losing to Steve Benjamin, who won a second term. Baddourah owns Badd Boys Café in Middleburg Plaza in Columbia.

Tameika Isaac Devine, current At-Large Councilwoman. First elected in 2002, Devine was the first African American woman elected to Columbia City Council’s At-Large seat. Devine is a founding partner in Jabber & Isaac PA, focusing on real estate, probate and business transactions. During her time on City Council, she co-chaired the Workforce Initiative Project (WIP), aided the reorganization of the City’s courts system and helped establish the City’s Criminal Domestic Violence Task Force. She has been involved on the Environment & Infrastructure Committee (chair), Economic & Community Development Committee and Technology Committee. In 2019, she formed the City’s Affordable Housing Task Force in order to create “inclusive, equitable, and safe places to live, for owners and renters, priced such that all Columbians can afford necessities of living and fully engage in our community.” Devine is active in her church, Brookland Baptist, and Delta Sigma Theta sorority; she is a graduate of Spring Valley High School in Columbia and holds a degree in Business Management from Hampton University and Juris Doctorate from University of South Carolina School of Law. She is married to Jamie Devine and has four children – Tamia, Jade and Jameson and James Henry (stillborn Aug. 2014).

Daniel Rickenmann. First elected in 2004 as an At Large member on City Council, Rickenmann served two terms before deciding not to seek reelection to that position in 2012. He was elected to serve District 4 in 2018. Rickenmann is a well-known businessman, having owned and partnered with several restaurants around Columbia’s Five Points District, including Birds on a Wire, MoMo’s Bistro, and Yo Burrito. He currently works as a business consultant. The Rickenmanns have two teenage daughters, Carlyle and Ellie, and are active members at Shandon United Methodist Church. Rickenmann graduated Virginia Episcopal School in Lynchburg, VA, and holds a bachelor’s degree from the University of South Carolina.

Tyler Bailey… Columbia Attorney Tyler Bailey has officially announced his candidacy for Columbia City Council At-Large. “Although Columbia has seen encouraging signs of growth, far too many of our neighborhoods have been left behind by lack of opportunity, poor infrastructure, lack of investment, lack of affordable housing, and disappearing grocery stores that make living and raising a family tough,” says Bailey  www.TylerForColumbia.com

Heather Bauer is a small business owner and information technology project manager who attended Indiana University of Pennsylvania on a volleyball scholarship and earned a master’s degree in media arts at the University of South Carolina. She owns Workhorse Fitness. Voteheatherbauer.com

Aditi Srivastav Bussells is a public health researcher with Children’s Trust who received her PhD in public health at the University of South Carolina. She believes that everyone, “regardless of their zip code, deserves to have equal opportunities to thrive.” She is married to Louis Bussells. www.aditiforthecity.com

John Crangle is a Columbia attorney, open government watchdog, former leader of Common Cause, and current lobbyist for SC Progressive Network who first ran for political office in 2018 – losing to Kirkman Finley for SC House District 75. In an interview with The State newspaper, Crangle said he is concerned about crime and would work to curb gun violence, advocate for curfews at bars in the city and raise salaries for Columbia Police officers. He is the author of Operation Lost Trust and the Ethics Reform Movement, an in-depth look at the FBI sting of the SC General Assembly during the 1990s that uncovered public corruption in state government.

Deitra Stover Matthews…is the Government Relations Manager for Conservation Voters of South Carolina and has worked and advocated in the space of environmental policy for more than a decade. For information about the campaign and Deitra’s candidacy, visit DeitraforColumbia.com.

Aaron D. Smalls is a professional photographer seeking office for the first time. In an interview with The State newspaper, Smalls said he would focus on improving relationships between the police and the community through trust and transparency, enhancing utilities, and improving funding for Columbia’s arts community.

John Tyler is an activist with One Common Cause Community Control Initiative. Tyler also works for Lizard’s Thicket and is an administrative coordinator at a cosmetology school. The first-time candidate told The Post and Courier that he would help reinvest in low-income areas of the city and invest in more training for Columbia Police officers and work with school officials to address mental health and counseling resources.

Tina Herbert is an attorney specializing in injured workers at Mickel & Bass, LLC; she is a former director with the city’s Office of Business Opportunities (OBO) and Community Development Department. During her time as a city employee, Herbert lists her greatest achievements as implementing the Main Street Façade Program, developing the Minority Business Opportunity Conference and the Columbia Disadvantaged Business Enterprise Program as well as the Real Business Women of Columbia for Women’s Empowerment. She holds a degree in accounting from St. Augustine University in Raleigh, and a dual degree (a Master’s in Business Administration and Juris Doctor) from North Carolina Central University in Durham, NC. Tinaherbert.com

Christa Williams is president of The Rural South Carolina Project, a non-profit that seeks to empower underrepresented voters in rural and underserved communities in the state. Williams is also a commissioned officer with the SC Army National Guard and employee with SC Department of Corrections and a member of various civic organizations. She holds a Bachelor of Arts degree in Business Administration and Political Science, as well as a Master’s Degree in Organizational Leadership from Columbia College, and has completed studies toward a Doctorate of Education at Northeastern University of Boston. Christawilliams.com

Joe E. Taylor Jr is the former SC Secretary of Commerce (2005-2011), a developer and businessman. He is CEO of Park and Washington LLC and co-owner of the Italian restaurant Il Bucato on Beltline Boulevard. In an interview with The State, Taylor said his platform consists of public safety, growing small business and streamlining city services to reduce cost and improve services. Taylorforcitycouncil.com