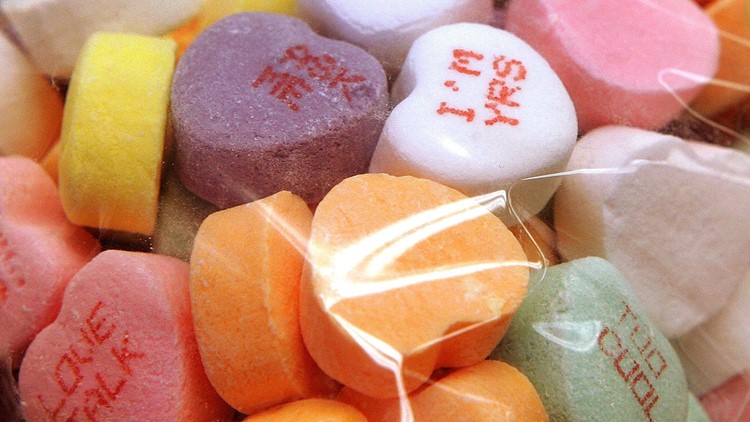 PARK RIDGE, IL - FEBRUARY 10: A bag of Conversation Hearts is displayed at a Fannie May Candies store February 10, 2006 in Park Ridge, Illinois. According to reports, this year's total Valentine's Day spending will increase by half a billion dollars in comparison to last year, with the average male spending nearly double that of the average female. (Photo by Tim Boyle/Getty Images)

Sweethearts are back in time for Valentine's Day, albeit with some changes

BRYAN, Ohio — A Valentine's Day favorite is back with a few changes for your Sweethearts.

One of Ohio's favorite candies for Valentine's Day, according to USA Today, Sweethearts are making a comeback.

The sugary conversation hearts didn't hit store shelves in time for February last year. That's because the New England Confectionery Co. (NECCO), which made the candy for more than 100 years, went bankrupt in 2018. Spangler Candy Co., based in Bryan, took over NECCO late last year. The local candy-maker didn't have time to get the 8 billion Sweethearts typically produced each year out in time for Valentine's Day, 2019.

Fast forward to 2020. Spangler Candy Co. says Sweethearts are back on store shelves, though in limited quantities. The candies are available at major nationwide drugstores such as CVS and Walgreens.

Before you rush out to to tell your significant other "I'm YRS" or that he or she is "TOO COOL," there are some differences in this year's batch of candy hearts. Spangler says there will be fewer sayings and a slightly different taste.

Spangler is bringing back the candy's original recipe, found among paperwork from the previous owners. That means a shift in flavors such as banana and wintergreen when you sink your teeth into the heart-felt sweet treat.

Conversation heart candies, like Sweethearts, generate an estimated $1.8 billion in sales every year, according to CandyStore.com. And there are competing brands out there, so you may still find some Sweethearts knockoffs. If you saw Sweethearts for sale online, those may have been from last year or earlier. Eat at your own risk.