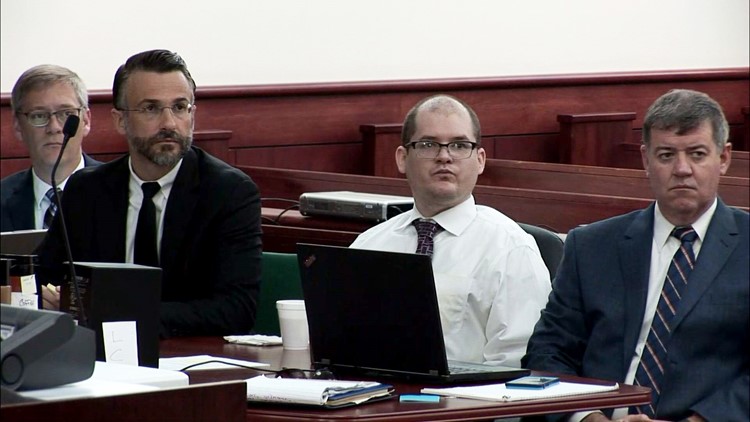 Photo by: WLTX/Pool
Timothy Jones Jr. (seated, with no jacket and glasses) sits during his trial in Lexington, SC.

LEXINGTON, S.C. — Testimony begins Wednesday in the trial of the father accused of killing his five children is set to start Tuesday afternoon after two weeks of jury selection.

The 18-person jury, made up of 10 women and 8 men will decide Timothy Ray Jones Jr.'s guilt or innocence in the murder of his five children: Elaine, 1; Gabriel Jones, 2; Nahtahn Jones, 6; Elias Jones, 7; and Mera Gracie Jones, 8.

Opening statements in the case were held Tuesday.

Prosecutors allege Jones killed the children in August of 2014 before dumping the bodies in another state. Prosecutors are pursuing the death penalty for Jones.

Jones has pleaded not guilty by reason of insanity in the case.

RELATED: Cops: Dad led them to the bodies of his 5 children

His guilty plea would allow one of four possible outcomes in the trial: guilty, guilty by reason of insanity, not guilty by mental defect, or not guilty.

If found guilty, the death penalty would not be automatic. Jurors would then be asked to consider extenuating circumstances and could sentence Jones to life without parole rather than death.

RELATED: 5 SC children were murdered. Their father is now on trial