'They should have cared when she was alive,' | Sisters say Vanessa Guillen gate a symbol of change needed on Fort Hood

"The positive side of this gate is to remember her name, to remind... those victims both men and women being victims of sexual violence to not stay in silence." 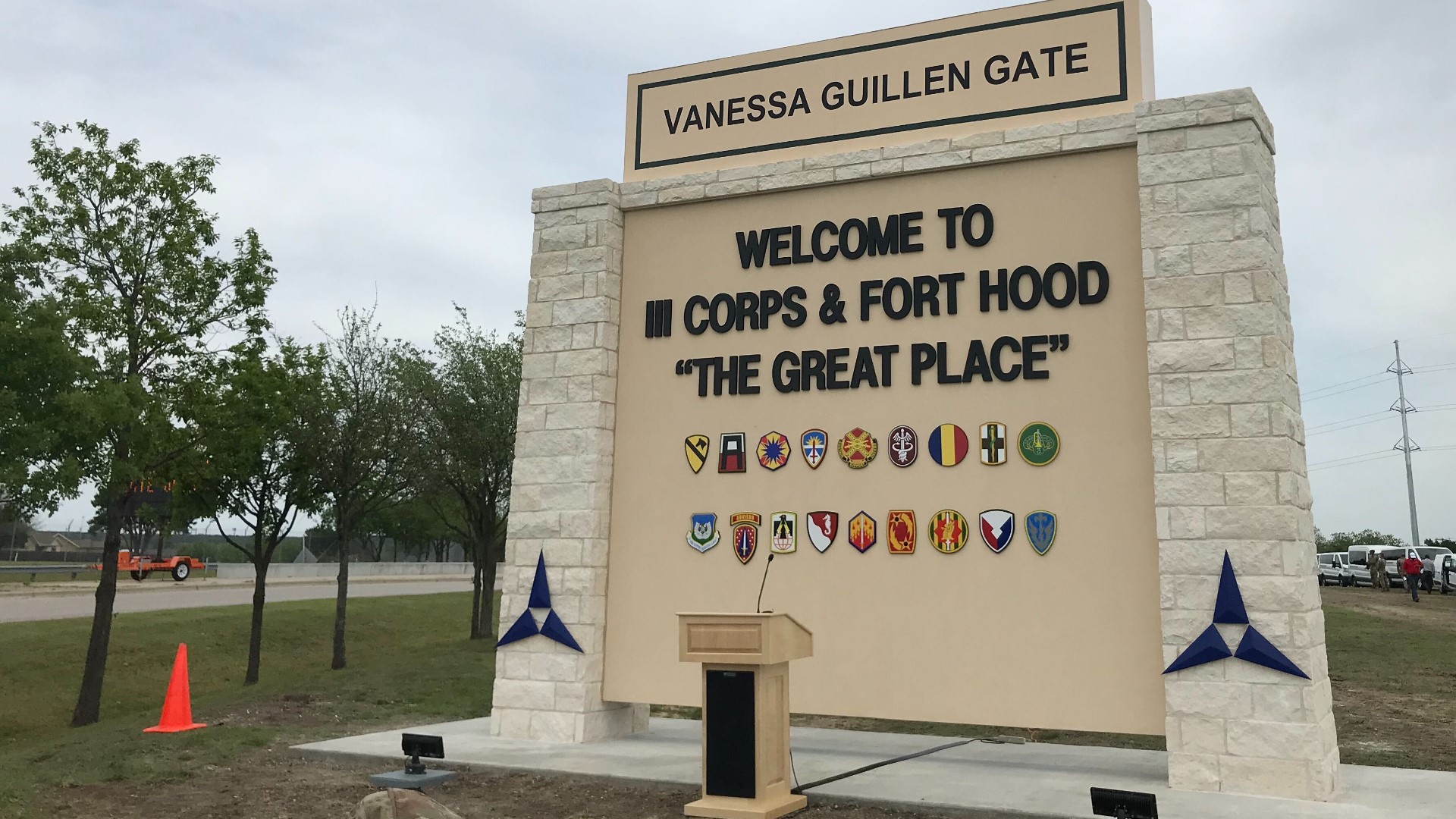 FORT HOOD, Texas — It was an emotional day for the Guillen family as officials unveiled the Fort Hood gate that's been named in Spc. Vanessa Guillen's honor.

Her family, who helped with the gate's design, took part in the unveiling at the intersection of Rancier Avenue and Fort Hood Street. It leads to the 3rd Cavalry Regiment, where Guillen served.

"Today, one year ago was the last time my family and myself saw [Vanessa Guillen] so it means a lot that [Fort Hood] did this memorial today to remember her and not only to remember [her] as someone who was murdered, but someone who was a daughter a sister a friend," said sister Lupe Guillen as she held back tears.

The suspect in the case, Spc. Aaron David Robinson, shot and killed himself the day after her body was found. He reportedly killed Guillen in an armory room on Fort Hood.

Another suspect in the case, Cecily Aguilar, was arrested over her alleged role in Guillen's death. Authorities say she reportedly helped her boyfriend, Robinson, bury Guillen's body.

"My sister was murdered here at Fort Hood and not until a year later are people caring about her, about what she went through. They should have cared when she was alive...," Lupe Guillen said. "... It had to take my sister's life for us to realize the bigger issues."

In the aftermath of Guillen's death, the Fort Hood Independent Review was created with the goal of examining the climate and culture at Fort Hood and the Army, particularly regarding the implementation of SHARP, or the Sexual Harassment/Assault Response and Prevention program.

"The positive side of this gate is to remember her name and to remind and reflect about what happened April 22; about those victims both men and women being victims of sexual violence to not stay in silence to not be afraid to report it and to simply speak up because my sister couldn't speak up," Lupe Guillen said.

"Sexual violence is not an issue, it's an epidemic inside the armed forces and she had to die. She had to be murdered and dismembered and burned and it was for us all of us here for us to realize that this is happening for decades," Lupe Guillen said.

"There's a lot of issues and people running around and doing wrong things but taking them out isn't going to fix the epidemic that exists," added family attorney Natalie Khawam. "It needs to be reformed and if it required Vanessa's death to start reform, start this movement, the momentum is here we just need to resolve it through legislation."

In December, the committee released a 136-page report detailing its findings, as well as recommendations to benefit Fort Hood and the Army. It detailed areas of improvement needed in SHARP, Fort Hood's Criminal Investigation Command and led to changes in the Missing Soldiers protocol, as well as the creation of People First Task Force.

Military leaders were also held accountable. As a result, former Secretary of the Army Ryan D. McCarthy announced the firing or suspension of 14 Fort Hood leaders, which included two generals, according to the Killeen Daily Herald.