Ciera “CiCi” Hecht recorded her first double-double of the season with 10 kills and 13 digs, while Macy Carrabine scooped an A&M career high 24 digs

Three Aggies registered double-digit kills, as Morgan Christon led the way with 18 on .238 hitting. Ciera “CiCi” Hecht recorded her first double-double of the season with 10 kills and 13 digs, while Macy Carrabine scooped an A&M career high 24 digs. Setter Camille Conner logged her sixth double-double of the season, finishing with 47 assists and 15 digs, while Mallory Talbert tallied a team-leading seven stuffs.

Georgia opened with a pair of attack errors, while Christon logged a kill to give the Aggies a 3-0 start to open the match. The Bulldogs rattled off five-straight points to take their first lead of the match, sitting at an 8-7 advantage. Georgia held a 15-12 edge at the media intermission and eventually pulled ahead by four, but Lauren Davis teamed up with London Austin-Roark to halt the Bulldog advance. After trailing 21-16, the Aggies responded with a rally, but Georgia took the first set, 25-20.

Davis registered three kills on the right side to pave the way for an early four-point lead in the second for the Aggies. The Bulldogs evened the set at eight, before pulled ahead, 12-9. A block on the right side from Christon and strong serving from Taylor Voss helped A&M regain control. Both teams continued to exchange blows, before the score knotted at 20. The Aggies embarked on a 4-0 run with Voss back behind the service line, taking the set by a 25-21 margin.

Georgia opened the third on a 4-1 scoring run, but Davis and Austin-Roark helped the Aggies battle back to within one. The Bulldogs widened their gap, sitting at a 15-11 cushion at the media timeout. A kill from Conner helped the Maroon & White level the set at 17-all, before holding the 19-17 edge on a back-row attack from Hecht. Voss’ career-high and team-leading fifth ace pushed A&M ahead, 23-22, as a Davis kill sealed the extended set, 29-27.

A block by Davis and Talbert squashed an eight-point scoring run by the Bulldogs in the fourth, while Conner’s seventh kill of the match spark a 5-1 Aggie response that forced Georgia into a timeout with a slim 15-14 lead. The Bulldogs regained control and closed on a 4-0 run to grab the set, 25-21.

Christon opened the deciding set with a pair of kills and the Maroon & White took an early 3-1 lead. The Aggies embarked on a 5-0 run with Conner behind the service line, who delivered two aces, to jump out to an 8-2 cushion. The fifth set featured four ties, but the Aggies never gave the Bulldogs a lead, culminating in a 17-15 victory.

Texas A&M will wrap up its homestand on Wednesday, Oct. 13, when Ole Miss travels to Aggieland. First serve between the Aggies and the Rebels is set for 7 p.m. on the SEC Network. Wednesday’s contest has been tabbed Teacher Appreciate Night. School faculty and staff will receive $3 admission at the door with a valid ID.

On her impression of the team’s response...

“I think our team has really found a way to respond well after being challenged by the opponent. Multiple players stepped into different roles tonight. CiCi [Ciera Hecht] has been playing six rotations for us, so that is where the fight and determination comes from. It makes me proud to know that I can go to battle with them any time, because of that willingness to step up.”

On the strategic changes made during the match...

“We went to Madi [Madison Bowser] for some subbing and blocking, for sure. That’s all situational, and it has to be in a good point during the match when we have subs available, and we want to run points. We did that a couple of times, and we definitely wanted to do that in the fifth set because we had more subs available. I think that the execution should be a little sharper, but when we’re doing those things, we need to make sure the whole team understands the reason why we’re doing them.”

On adjustments made in Friday’s match...

“That was definitely a team win. We had a bunch of different people coming off the bench, so that brought energy on the court. I’m proud of how we played and how we finished the match. I think that we lacked consistency yesterday, and we were never able to get into a rhythm on either side of the ball. So, we know going into each game that we need to have more consistency in those areas.”

On the quality of competition in the SEC...

“There are no bad teams in the SEC. Every team is good, and on any given night, it could be anyone’s game. We just have to come out and work hard in every single match.” 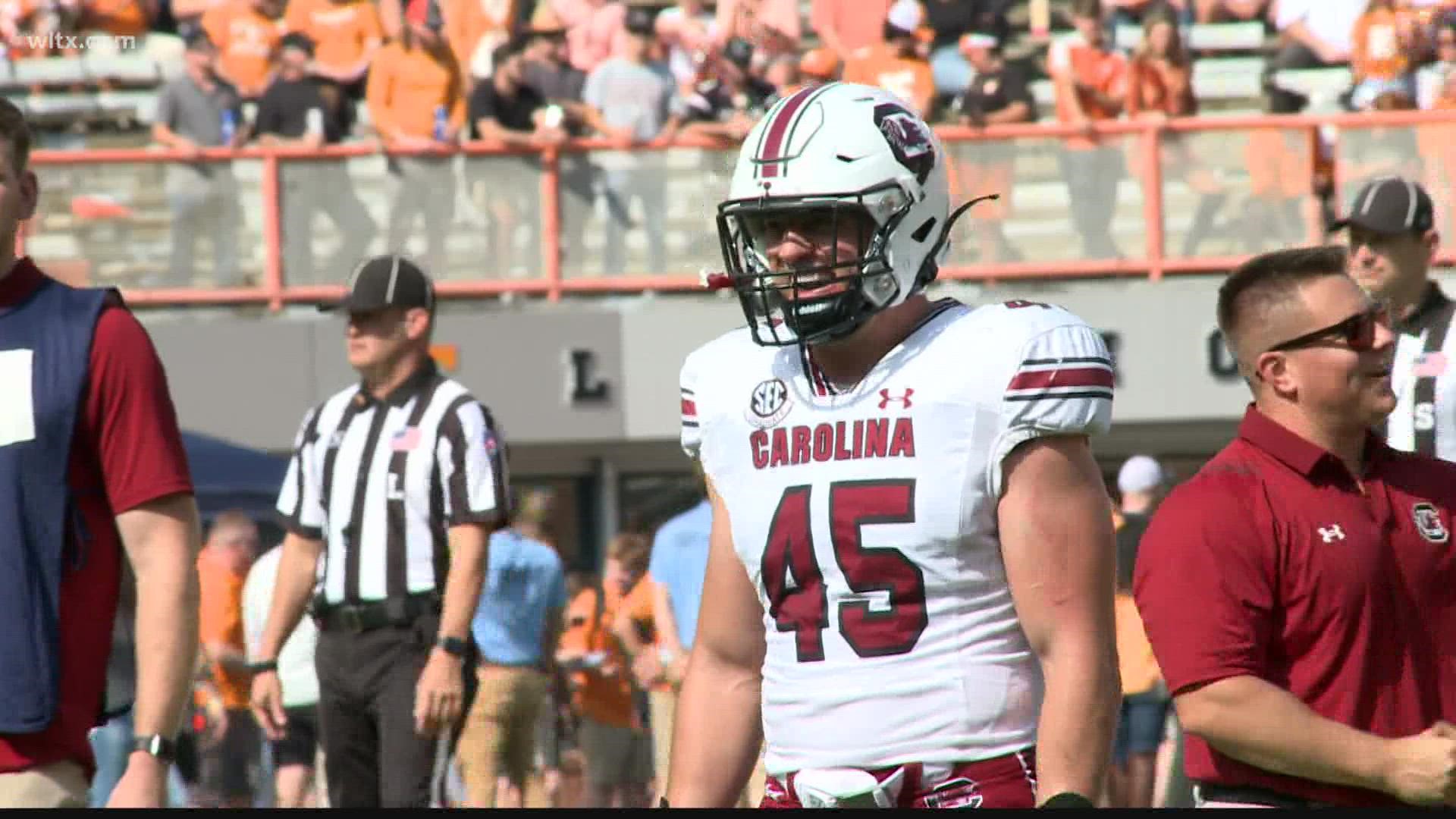 Gamecock linebacker has made an impact off the field