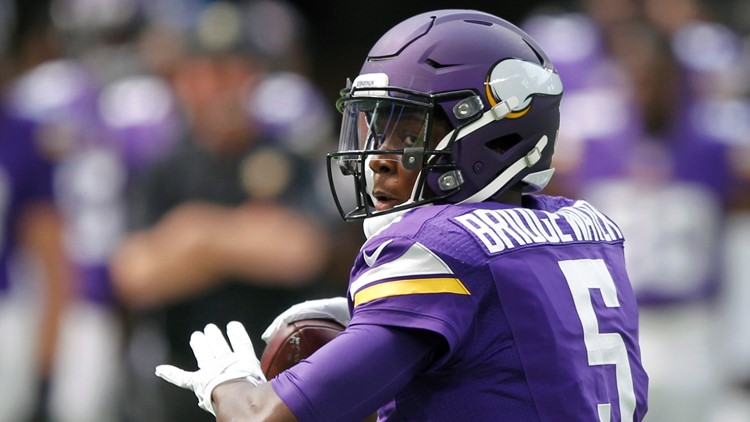 Photo by: AP
FILE - In this Aug. 28, 2016, file photo, Minnesota Vikings quarterback Teddy Bridgewater throws a pass during the first half of an NFL preseason football game against the San Diego Chargers,in Minneapolis. An unquestionable lift for the Vikings came this week with Bridgewater activated. He'll serve as backup to Case Keenum, but his return from a devastating knee injury in training camp 2016 is a huge plus (AP Photo/Andy Clayton-King, File)

Bridgewater has high hopes for Panthers

CHARLOTTE, N.C. — Normally a free agent signing the caliber of quarterback Teddy Bridgewater's would have warranted a large news conference with a jersey presentation and photo op.

But times are different -- and so was Bridgewater's introduction.

"Hey guys first off I just want to say thanks to the Carolina Panthers," said Bridgewater on Thursday.

On Thursday we met Bridgewater via Zoom -- an increasingly popular web-based meeting tool. The picture isn't perfect for Teddy, but the picture of who he is became clear.

"I've been able to learn and grow from all the adversity that I've gone through," he said.

Bridgewater was a promising rookie for the Minnesota Vikings 6 years ago, making the Pro Bowl in 2015. But a devastating knee injury derailed his career, before he landed in New Orleans and went 5-0 in Drew Brees' absence last season. He's a solid quarterback. Many question whether or not the 27 year old can return to his previous path to stardom.

"I'm extremely confident," he said. "I actually feel like I am better than what I was a couple of years ago."

"I think the (offensive coordinator) Joe Brady connection extremely important," said Charles Robinson, a senior NFL writer at Yahoo. "I think having that confidence of Joe Brady was paramount in signing Teddy Bridgewater."

He also mentions the breakdown of Bridgewater's deal -- three years, flexible after two.

Teddy's got the opportunity to prove himself the next couple of seasons," Robinson said. "Show what he's got and convince the Carolina Panthers that he's the guy for the next decade and not just the next few seasons."

In terms of the guy of the last decade? Cam Newton? He and Teddy go way back, Bridgewater calling him, "one of the finest men in the NFL."