Clemson adjusts without its offensive coordinator

When Dabo Swinney learned Tony Elliott would miss the Sugar Bowl after testing positive for COVID-19, he activated his emergency plan. 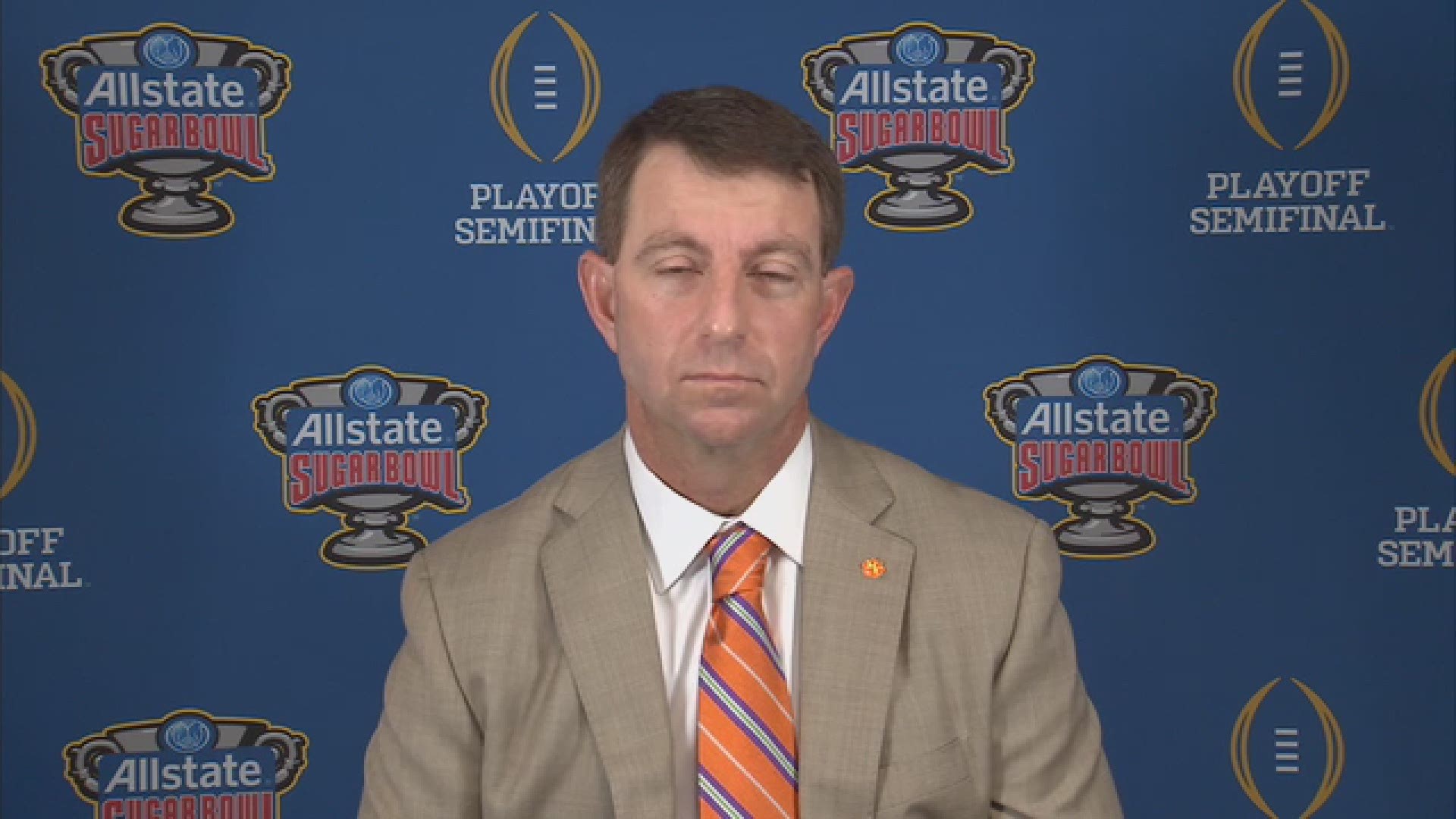 NEW ORLEANS, Louisiana — Make no mistake, Clemson will miss its play caller and offensive coordinator Tony Elliott who is home in the Upstate after his positive COVID-19 test.

The good news on both sides is Elliott is feeling well and there is a plan to deal with his absence and it will involve graduate assistant and former Clemson All-American CJ Spiller.

"Typically myself or Street (Brandon Streeter) will rotate the backs when we need to. Streeter will go up where Tony was. As far as -- we won't have to rotate that. Spiller will handle that. He will do a good job of that on the field," said head coach Dabo Swinney at Thursday's head coaches news conference in New Orleans.

"As far as quarterbacks, just like coming off the field after each series, typically street is right there. I will huddle up with Trevor [Lawrence] as well. So just the difference is Street will be on the phone. So Trevor will go get on the phone and still have the same conversations you would normally have. It will just be on the phone versus right there in person."

So a collaborative effort with Elliott, Streeter and Swinney will be down a third of its members but Elliott will still communicate with the staff leading up to kickoff.

If Swinney sounds like a guy who isn't panicking over this adjustment, he isn't. Long before the team arrived in New Orleans and really, long before the team kicked off in September, there was a contingency plan just in case a member of the staff was sidelined with the coronavirus.

"2020 has forced all of us head coaches to have to think about things that we've never thought about before going into a season. We've never had a season where a virus can just take somebody out in a moment's notice.  So we've all had to prepare for that," Swinney said.

"So we've had a plan in place for myself being out to you name it, every single coach. I was just disappointed for Tony. He works his tail off. It's disappointing he couldn't be here with us. But as far as thought going into it, there wasn't much thought, because that had already been decided a long time ago. Again, that's for every coach on our staff, have a plan for all of that because you have to."

The Tigers went through this with Trevor Lawrence who missed a couple of games after testing positive. They had a backup plan and they have a backup plan now.

"Just like having a depth chart for your team, if Trevor's out, D.J.'s [Uiagalelei] going in," Swinney said.

"You have a depth chart. I kind of had to do a depth chart for my staff on how this guy's out, how would I adjust? So that thought process had already taken place a long time ago."