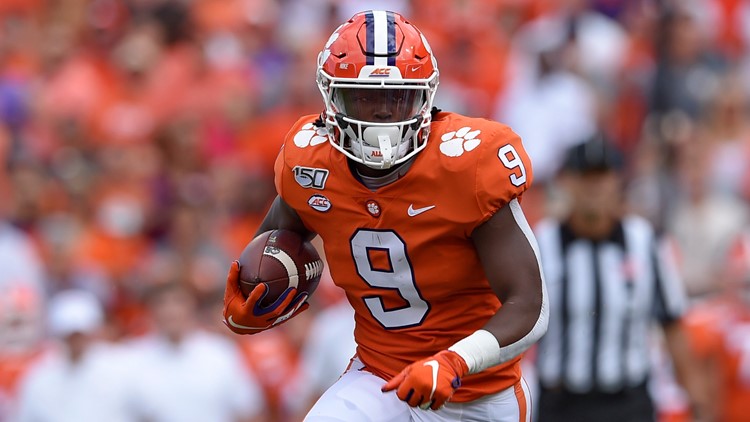 Photo by: AP
Clemson's Travis Etienne runs out of the backfield to score a touchdown during the first half of an NCAA college football game against Florida State Saturday, Oct. 12, 2019, in Clemson, S.C. (AP Photo/Richard Shiro)

After Clemson's 45-14 win over Florida State, two Tigers have been honored by the ACC.

Matt Bockhorst is the offensive lineman of the week, while Travis Etienne is the conference back of the week.

This marks the first time Bockhorst has received an ACC weekly award. Last week, he entered in a reserve role and graded out at 91 percent with two knockdowns, according to the team’s coaching staff. He helped Clemson gain 552 total yards, surpassing the 524 yards posted by the Tigers against the Seminoles last year for the most Clemson has posted against Florida State in a game in series history.

Etienne’s selection is his second of the season and the sixth of his career. He was honored earlier this year for his 205-yard performance in the season opener against Georgia Tech. He becomes the eighth Clemson offensive player to earn at least six career ACC weekly honors, joining Woodrow Dantzler, C.J. Spiller, Sammy Watkins, Tajh Boyd, Deshaun Watson, Mitch Hyatt and Trevor Lawrence.