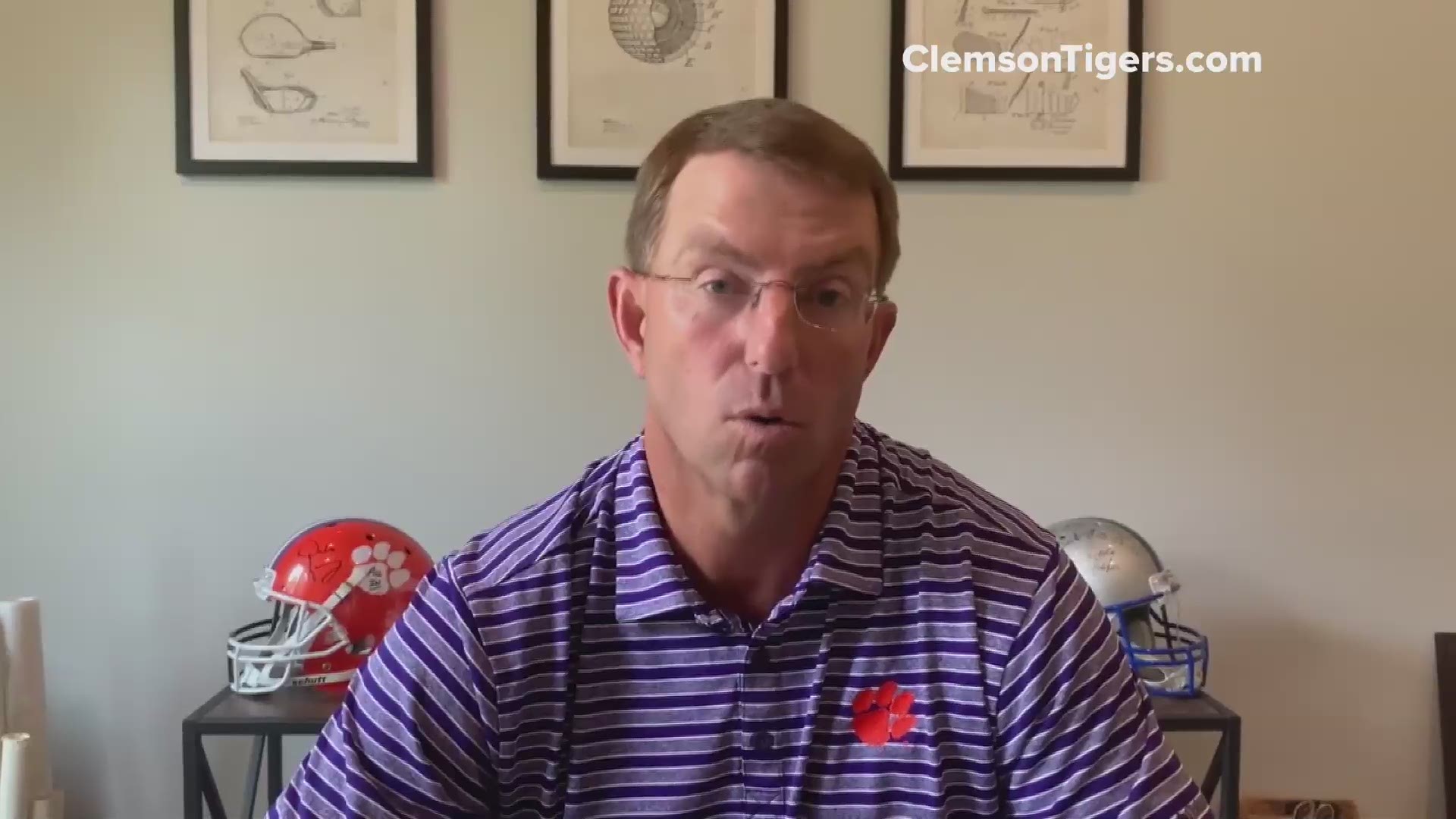 COLUMBIA, S.C. — Clemson football head coach Dabo Swinney responded in a video message to recent criticism of both he and his program on how they handle matters of race.

The team's website posted a nearly 14 minute long video from Swinney on Monday afternoon where he addrssed multiple issues raised by articles and reports made in the last week.

"This is a historic time in our world and in our country, and as a coach and as a team, we will do our part to create positive change against racism of any kind, social injustice and police brutality," Swinney said.

The first concerns were first raised nearly a week ago when it was revealed that Clemson assistant coach Danny Pearson used the n-word during a practice three years ago. Pearson said he was repeating the use of the word, not calling the player, D.J. Greenlee, the racist epithet.

Swinney backed up his coach's account of the event. He said Greenlee had used the word in a moment of frustration over his inability to block the play, and that Pearson had corrected him and in doing so repeated back the players' words, telling him not to use that type of language.

Swinney said he did not witness the incident, but Greenlee approached him about it. "When things happen, we deal with it. Sometimes its in private, sometimes it public. In this particular case the player came to me in private."

Swinney said Pearson apologized him and they all moved on. "There wasn't anything swept under the rug, there wasn't any dirty secret, we handled it directly."

Swinney said there are two word he doesn't tolerate from players and coach: the "n-word" and "g-d damn." He said if a coach was actually caught using the racial slur against a player, he'd be fired immediately.

Over the weekend, a post surfaced of Swinney wearing a t-shirt that said "football matters" which some interpreted as mocking the Black Lives Matter movement. Swinney said he's had the shirt for years and was given to him by the National Football Foundation, and is a promotional slogan they've had for years.

"Any insinuation that I was trying to mock Black Lives Matter...is just an attack on my character," he said.

"God loves us all, none of us are better than anyone else," Swinney said.

He also said he did not tell players they couldn't participate in a sit-in, but said that he reminded players that if they participated, it would make news, so they needed to be aware of that in advance. He also said there was a time when he told players that they shouldn't play music that used the "n-word" after he became embarrassed while showing a coaching hire one of the team facilities. Swinney said he did not use the n-word, as some reports suggest.

"Actions are much louder than any words that I could say and I will tell you that I always love my players, I'm tough on them, but I love them deeply," he said. "And this past week it has hurt to see the pain in my players. To hear it in their voice. I know they're hurting and have pain for what's going on in this country and this world and it's also hurtful to see our program be attacked but I know and what I've lived my life by is God never says oops. God just say say ops. And we have an opportunity to grow, to learn, to listen, to get better, and get stronger. And that's what we'll do."