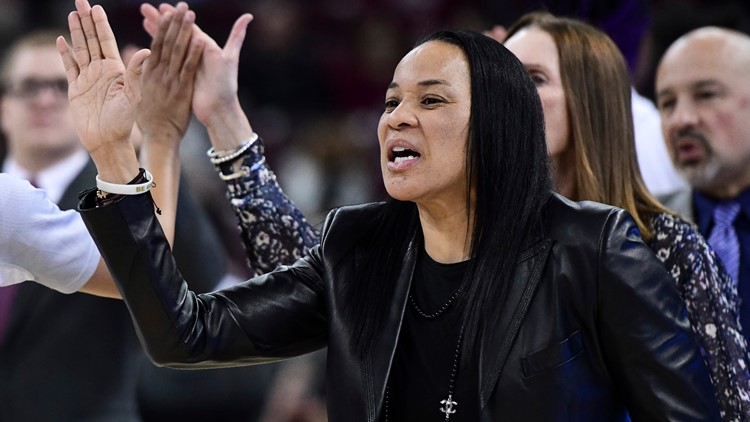 COLUMBIA, S.C. — Dawn Staley unfortunately won't get a chance to cut down the net for winning a national championship but she might be recognized as the best coach in the nation.

Thursday it was announced that Staley is one of four finalists for the 2020 Werner Ladder Naismith Women's Coach of the Year. It the fourth time Staley has been a finalist.

Beginning March 20, fans will be able to support their favorite finalist by visiting naismithfanvote.com until April 1, to cast their ballot. The fan vote will count for five percent of the overall final vote. The 2020 Werner Ladder Naismith Women's College Coach of the Year is scheduled to be announced on April 3, and the winner will be honored at a later date.

This season Staley's brought in the number one recruiting class and they more than lived up to the billing. Teamed with other stars already on the team, the Gamecocks rose through the rankings over the course of the season, and wound up being ranked number one for two straight months to close the year.

The team lost just one game, to Indiana, and that was back in December. They then rattled off a school-record 26 straight victories, with twelve of those remaining 26 wins came against top-25 opponents, including double-digit victories over three top-10 opponents. That included a win over UConn, who the Gamecocks had never beaten.

South Carolina's schedule was rated fifth strongest in the country and featured 17 games against RPI top-50. The Gamecocks went 16-0 in SEC play for the second time under Staley - just the fourth 16-0 season in SEC history - and won their fifth regular-season title in seven seasons. They went on to storm through the SEC Tournament to their fifth title in six seasons, defeating their three opponents, which included two ranked foes, by an average of 24.3 points.

They were set to be the number one overall seed and the heavy favorite to win the national title when the NCAA cancelled all postseason tournaments and championship games.